Compact premium SUV is easy to like and live with 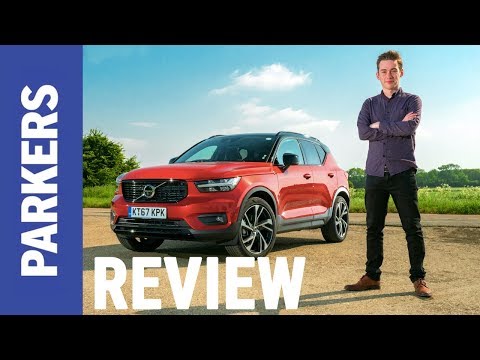 Volvo has earned its place as a byword for middle-class safety with its back catalogue of secure and practical estates. But in more recent times, the Swedes have become synonymous with the SUV crowd. The XC40 is the smallest of Volvo's trio of SUVs, offering buyers an entry point into the premium brand.

Yet, the XC40 doesn't feel like the junior model in the lineup. It doesn't compromise on looks, kit, or safety. In fact, it shares a lot of tech with its much pricier and larger XC60 and XC90 siblings.

Predictably, there are a lot of rivals to consider, but the pick of the crop currently includes the BMW X1, Audi Q3 and the Range Rover Evoque, with the latter being our favourite of all the small premium SUVs. The XC40 will have to be very good indeed to beat the small Rangie.

Volvo’s exceptional reputation for safety continues with the XC40. Confirming its status, it received a full five-star safety rating when it was assessed by Euro NCAP in summer 2018. Central to this is the standard-fit City Safety pack. Capable of detecting vehicles, pedestrians, cyclists and large animals, the technology will alert the driver or automatically apply the brakes if it detects that a collision is imminent.

It's also available with the company's constantly-improving Pilot Assist adaptive cruise and lane-keeping system, which does a reasonable job of handling motorways and A-roads in a semi-autonomous manner. As part of its plan to stop a driver being seriously injured or killed  Volvo now limits the top speed of its cars to 112mph.

Petrol or hybrid, but no diesel

Volvo doesn't offer diesel engines in the XC40. The company has long been committed to the phasing out of diesels for environmental reasons and in August 2020 it cut them from the XC40 range entirely. If you want the D3 or D4 diesel engines, you'll have to opt for a used XC40.

The petrol lineup starts with the three-cylinder front-wheel drive T2, which is available in manual form only. Mild-hybrid models start with a B rather than a T. The B4 is the cheapest, while the B5 is more expensive but more powerful too.

Plug-in hybrid and fully-electric models are named Recharge. The T5 Twin Engine plug-in hybrid will cover 27-miles on electricity alone thanks to an 82hp electric motor. While there's also a 1.5-litre engine for journeys further afield. Combining both power sources, it should be capable of up to 134.5mpg.

There's a fully fully-electric XC40 Recharge Pure Electric on the way. It's set to be Volvo's first fully electric production vehicle, with an official range of 245-miles. It will also have 408hp on offer. Or in other words, about the same as serious performance cars from ten years ago.

It's now available to order too. Available in R-Dynamic trim only, deliveries are expected to begin in the first quarter of 2021. Prices start from £53,155, meaning it won't be eligible for the plug-in car grant, which excludes cars costing more than £50,000.

Volvo has clearly gone to a lot of effort to make the XC40’s cabin as user-friendly as possible. For starters, there’s more than enough room for four adults (plus a child in the middle rear seat) with head and legroom in the back a particular highlight. Up front, Volvo’s designers have carved out generous amounts of space for storing larger items such as laptops and 1.5-litre bottles of water. Other handy features include a hook for hanging shopping under the glovebox and slots for credit cards by the steering wheel.

The boot is large if not class-leading, and features underfloor storage and rear seats that fold down completely flat at the flick of a switch. One of the main draws to the XC40 will surely be its high-quality feeling interior. R-Design and Inscription models benefit from the use of materials such as wood and leather, while all cars come with a 9.0-inch central touchscreen for its Sensus infotainment system and a 12.3-inch TFT driver information display in place of traditional dials.

For anyone moving from another model in the Volvo range, the XC40's interior will feel immediately familiar and non-threatening. In fact, the only point of difference between this and the larger 60- and 90-series models is the starter, which is a dash-mounted button as opposed to the knob you twist in the centre console. Overall quality is excellent, and there's very little evidence of this car's entry-level status in the Volvo range.

Comfortable, but not sharp to drive

The XC40 is probably the least sporty feeling car in its class. Refinement is excellent – even if the diesel engine is a little gruff – while the ride comfort is accomplished even on the larger alloy wheels. But worthy of note is the car's smooth ride, which easily eclipses its German rivals, and when combined with the XC40's excellent front seats and low overall levels of noise, makes this a genuinely impressive long-distance cruiser.

But judging by the number of XC40s on the roads now, it's already proving a hit with buyers, and helping Volvo establish itself as one of the established premium carmakers.

Our leasing partner, ZenAuto is offering the Volvo XC40 for £347 per month. The usual terms and conditions apply.

Available with Care by Volvo

The XC40 is the cheapest car available on Volvo's subscription service. Care by Volvo launched nationwide in September 2020, bundling the cost of a new XC40 (or any other Volvo except for the V40), maintenance, roadside assistance, and a slew of other options into a monthly cost. Insurance can also be sourced by Volvo, for an additional fee.

Prices start from around £560 per month. It works out as a bit more expensive than a regular Volvo XC40 leasing deal, but it also brings a lot more flexibility as cars can be changed with just three months' notice.

Click through the next few pages to read everything you need to know about the Volvo XC40 including its practicality, how much it costs to run, what it's like to drive – and whether we recommend buying one.

Land Rover
Range Rover Evoque
4.2 out of 5 4.2
Advertisement
How much is it to insure?

LED headlights on the Volvo XC40