Smallest SUV from Mercedes-Benz is an impressive performer 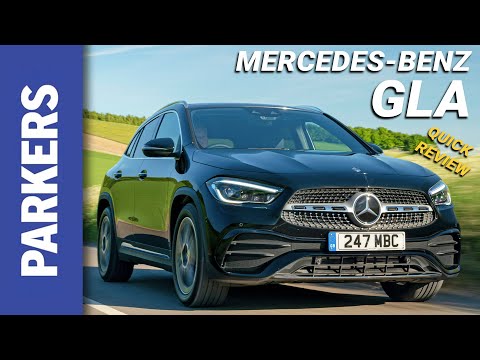 Mercedes-Benz has put its heart and soul into building an SUV for everyone. Ever since the original road-focused M-Class appeared on the scene in the mid-1990s, the company has continuously expanded its range to meet the needs of modern buyers. As well as the GLA we have here, there's the GLB, GLC, GLE and GLS – as well as the extreme G-Class – the daddy of them all.

But the GLA is the one that everyone wants. Relatively affordable, and boasting UK-friendly dimensions, this small family SUV, based on the excellent A-Class hatchback is the second-generation of the franchise. The original GLA was a little too closely based on its A-Class sibling, and was far from impressive overall, being beaten hollow by its rivals from Audi and BMW. Despite that, it went on to sell a million – and as a consequence, the second time around, you get the impression that Mercedes-Benz is taking it a whole lot more seriously.

It needs to be good, as the quality of the opposition is a whole lot higher than before. There's a slew of small SUVs it's up against, and even when sticking to the premium players, there's bags of choice. Top targets for Mercedes-Benz (and therefore, your shopping list too) are the Audi Q3, BMW X1 and Volvo XC40. Other rivals worth looking at are the Lexus UX, Jaguar E-Pace and smaller Audi Q2 and BMW X2.

The second-generation GLA certainly looks more premium than its predecessor, dripping with details that tie it in to the larger GLC and GLE. Unlike many SUVs, it's sleek with lots of attention paid to its aerodynamics, and arguably looks more upmarket than the A-Class it's based upon.

Inside, you get the same digital-fest of an all-electronic dashboard and infotainment set-up you find in the A-Class. Which, in a nutshell, means (on more expensive models at least) a single panel that incorporates both systems, and as well as looking very slick, is also highly user-friendly and packed with features. You get the option of touchscreen control or driving the system via a central control located by the transmission selector, or via a set of buttons and pads on the steering wheel.

Although it's not massive inside, there is more space than the old GLA as well as the smaller Audi Q2 and BMW X2. Trims and materials vary significantly from model to model, but the overall air of quality is impressive, especially compared to its unimpressive predecessor.

Lots of engines and trims to choose from

You're not spoiled for choice, with a front-wheel-drive 160hp 1.3-litre turbocharged petrol (badged GLA 200) as the lowliest model in the range. Of the diesels, you can choose from the GLA 200 d (front- or four-wheel drive) and GLA 220 d (four-wheel drive only) 2.0-litre diesels, which develop 150hp and 190hp respectively. Right now, the top model in the GLA range is the 225hp petrol-powered GLA 250. Expect faster models and a plug-in hybrid a little later.

In typical Mercedes fashion, the GLA’s trim structure is confusingly named – if not all that difficult to understand overall. The base model is named Sport, and comes as standard with 18-inch alloy wheels, LED headlights, heated front seats, dual-zone climate control, and a pair of seven-inch screens for dials and infotainment.

Mercedes-AMG GLA 35 and GLA 45 models are available to order with deliveries taking place later in 2020.

So, there are plenty of models to choose from – is it enough to see off the opposition?

Our leasing partner, ZenAuto is offering Mercedes A-Class from £402 per month. The usual terms and conditions apply.

Click through the next few pages to read everything you need to know about the Mercedes-Benz GLA including its practicality, how much it costs to run, what it's like to drive – and whether we recommend buying one.