Over the past year or so I've been lucky to have had the Skoda Yeti and Hyundai ix35 on long term tests. Having had the two sizable crossovers, getting in to the Audi A1 was going to be an ideal exercise in downsizing. While it may not be the typical example of downsizing to cut costs (the A1 is hardly saving any money) the challenge was going to be more about space and practicality.

Of course it doesn't take a genius to work out that you clearly won't get the same amount of stuff in the back of the Audi as you would the other two cars. The real point here is whether you can get around some of the problems despite the limited room on offer in the supermini.

Most of the time it's just me in the Audi and at a push I have one passenger, so with just two of us to cater for there are few problems. A weekly shop for just two doesn't amount to much, so despite a bootspace of 270 litres there's more than enough room for a couple of shopping bags.

This is all child's play really. It was never going to be a problem trying to fit in four pints of milk and some tinned tomatoes. The real test was going to be trying to fit my bike in the back. Now my judgement when it comes to load space is usually pretty good. I thought that with the rear seats down flat then I would have no problem fitting in. Try again.

Things weren't quite as simple as I was hoping. Even with the back seats folded down - they go nice and flat actually - I was still having some problems. In the end I had to push the front passenger seat forward too. If you want to carry bikes around then the A1 isn't the right car for you, I know that (now). But I decided to do a bit of investigating to see if it you could do it if you needed to. A quick enquiry to Audi and they told me that even on the smallest model in the range you can easily carry your bike around with you. If you spec your car with roof bars then for an extra £80 you can get a bike holder. For an extra £383 you can get a tow bar bike carrier which is mounted to the tow bar if specified. So if you're looking to downsize and go for something with more sensible running costs, you won't have to compromise completely on practicality.

Bit of a squeeze getting the bike in, it's squashed against the glass 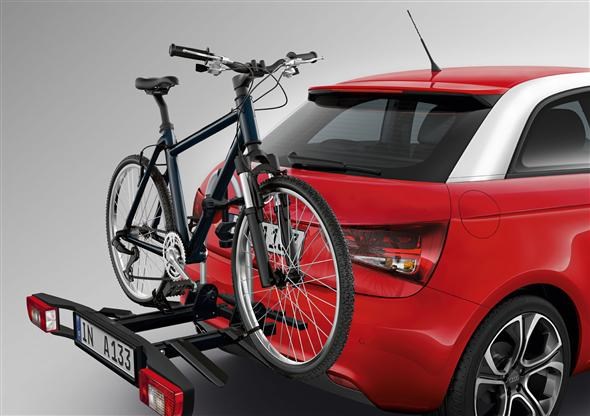 Not my car, but an example of how to get round space problems