Other Audi A1 models:

Smart, high-tech hatch is a desirable entry-level point to the Audi range 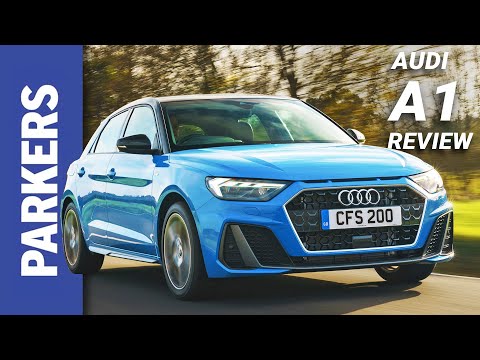 Once upon a time, the Audi A1 range featured a three-door, a five-door Sportback and sporty S1 models, with several rivals to go up against in the premium supermini class. It’s a slightly different story these days, with this second-generation A1 only offered in five-door Sportback form, albeit with the vaguely-rugged Citycarver to add some variety.

With fewer direct rivals than ever, does that mean that this is the A1 to rule them all?

Not quite. Despite maturing for its second generation, the A1 still needs to see off the MINI Hatch, but it aims to do so with sharp looks and a generous dose of technology that’s filtered down from much more expensive models in the Audi range. But is that enough to justify its price hike over its Volkswagen Polo and SEAT Ibiza donor cars?

And is it enough to see off cars like the DS 3 Crossback – a car that was previously a direct rival for the Audi, but has since spawned a crossover to appeal to modern buyers’ desires.

It’s externally a bit longer than its predecessor, although narrower and lower, and feels noticeably larger than before inside. Audi says you get more shoulder and elbow room with enough space so that four six-feet adults have just enough room to travel in comfort. There’s more space out back too – a 335-litre boot with the seats up, and 1,090 litres with them folded. That’s more than you get in the key MINI rival.

A standard 8.8-inch touchscreen infotainment system and 10.3-inch digital instrument cluster lend a slick, modern feel on all A1 models. The high-tech gloss is complemented by the crisp, architectural lines of the dashboard – it’s a world away from the old A1 in terms of look, but it doesn’t quite have the same solid feel the old car had.

There are some hard, cheap-feeling interior plastics in surprisingly noticeable places – the top of the doors, for instance. However, physical buttons are logically arranged, and the touchscreen intuitive to navigate. Unsurprisingly, you can upgrade both screens to larger, more feature-packed systems if you want, but there’s not a huge incentive to do so. It all just works well in the first place.

Comfort is good across all specs, with supportive seats and plenty of adjustment, while visibility is good as well. The lack of kit on some models does leave you feeling a little short-changed, though. You don’t even get climate control as standard on any model other than the top-spec Vorsprung, for example.

Several trim levels to pick from

The A1 was first launched in SE, Sport and S Line trims, but it’s changed slightly since, now comprising of Technik, Sport, S Line and Vorsprung. We’re not finished yet though. There’s an S Line Competition reserved for the most powerful engine available (read more about that further down the page), as well as two other S Line variations in the form of the Style Edition and Contrast Edition.

The former features grey paint with contrasting roof and bronze details (which we’ve run for six months), while the latter is a yellow model with black exterior details and bespoke alloy wheels.

There are plenty of opportunities to personalise the Audi A1 Sportback, with some key equipment combined in attractive bundles. The Plus Pack is what we’d recommend over anything else, adding dual-zone climate control, privacy glass and a front centre armrest. There’s also the Technology Pack (MMI Navigation Plus, Virtual Cockpit, wireless phone charging and Audi Connect services) and the Comfort and Sound Pack (Bang & Olufsen 11-speaker stereo upgrade, parking sensors and heated front seats).

Which engines are available?

There are four turbocharged engines available – all petrol this time with no diesel in sight, largely because it’s not a traditionally strong seller in this size car. There’s also no S1 like there was before.

The range kicks off with a 25 TFSI (95hp), moving up to the 30 TFSI (116hp) to the 35 TFSI (150hp). All engines come with a choice of manual or S Tronic automatic transmissions. Top of the range is the 200hp 40 TFSI available exclusively in S Line Competition trim with an S Tronic gearbox – it comes with 17-inch platinum grey alloy wheels with matching door mirror housings, adaptive suspension and red brake callipers.

On the move, performance is good for most engines, with impressive refinement. The way the car rides and handles errs on the sportier side due to its firmer ride, but still isn’t as involving as a MINI Hatch.

Click through the next few pages to read everything you need to know about the Audi A1 Sportback including its practicality, how much it costs to run, what it’s like to drive – and whether we recommend buying one.

Other Audi A1 models: