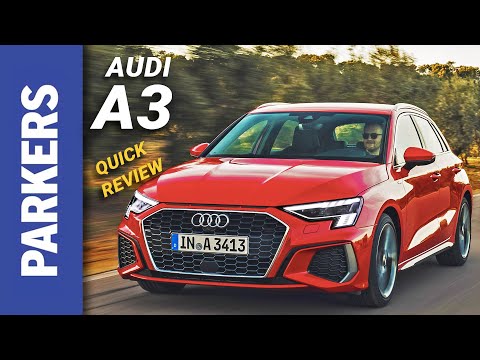 The new Audi A3 Sportback is the mid-sized hatchback for people who want to inject some premium polish into their daily life. This fourth-generation car cracks the conservative style mould in favour of a more youthful design that’s matched with a high-tech and classy interior.

Audi has ditched the less-practical three-door model, in line with the BMW 1 Series and Mercedes-Benz A-Class, so it’s only available as a five-door hatchback, called the Sportback, and as a four-door saloon. The current A3 is slightly longer and wider than before with marginally improved space inside.

What engine and trim options are there?

Up next is the petrol plug-in hybrid version of the A3, which officially has a 41-mile electric driving range.

The Audi A3 is available in Technik, Sport and S line specification grades, as well as higher-spec Edition 1 and Vorsprung guises. Buyers can also choose from package upgrades to avail of items like driver assistance and upgraded stereo systems at a better price.

If you’re after performance, the 310hp S3 joined the range in August 2020, with regular, Vorsprung and early-adopter Edition 1 trim options to match the rest of the A3 range.

The latest Audi couture is wrapped around familiar oily bits – in essence, this is a VW Golf in a posher suit. You won’t mistake it for anything but an Audi, although the designers have tried to inject some more interest this time round, to help the A3 Sportback stand out from the crowd.

So there are more overly-designed headlamps, whose day-running lights are made up of 15 individual pinprick LEDs, allowing for a different light signature depending on the model you choose. So sportier models will have one sparkly pattern, plug-in hybrids another. Games of family I Spy on the motorway will never be quite the same again.

On paper, there isn’t much to separate the A3 from its most direct rivals, the 1 Series and A-Class, though it isn’t the cheapest one. That said, Audi does offer competitive finance and leasing deals.

Our leasing partner, ZenAuto is offering the Audi A3 for £356 per month. The usual terms and conditions apply.

Click through the next few pages to read everything you need to know about the Audi A3 Sportback including its practicality, how much it costs to run, what it’s like to drive – and whether we recommend buying one.