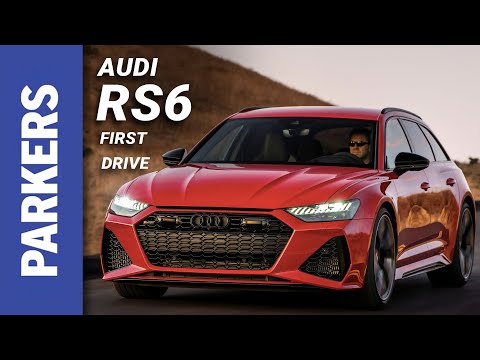 The RS 6 is a do-it-all icon for Audi. So, it’s perhaps unsurprising to see that the company has steadfastly refused to mess with the formula – a large and powerful petrol engine, driving all four wheels, with supercar-baiting performance, wrapped in a roomy and stylish estate-car body. This time around, the German manufacturer is promising more exciting handling too.

It'll need that extra facet; previously the RS 6 more or less had the market to itself, now it needs to convince fast estate buyers away from things like the Mercedes-AMG E 63 Estate, Porsche Panamera Sport Turismo and even BMW M5 Saloon.

We loved driving the old RS 6 Avant, so this one has a lot to live up to...

No hybrid powertrain - despite rumours

As far as the engine goes, Audi has kept it simple, but impressive. There’s no plug-in hybrid technology here like Porsche has chosen to use in its large sports saloons and SUVs, and neither has the car switched to diesel power as is the case with the recently-launched Audi S6. It uses the same 4.0-litre, twin-turbocharged V8 engine as the last RS 6 – but tweaked to deliver 600hp, up 40hp from the last RS 6 Avant in standard form.

Weight has increased by 140kg, but the RS6 Avant is still savagely fast with a claimed 0-62mph time of 3.6 seconds, which is 0.3sec faster than before. Maximum speed is identical, with an electronically-limited 155mph as its top end, but the Dynamic Package raises that to 174mph, or to 190mph with the Dynamic Package Plus.

Estate car only - an RS 6 tradition

The Avant bodystyle is your only choice, but if you want something less practical and more stylish, the RS 6’s running gear is shared with the RS 7. But the RS 6 Avant is pretty much all-new compared with the A6 Avant it’s based on – only the roof, tailgate and front doors are carried over. The front and rear wheelarches have been widened, so it’s 80mm wider, and the front and rear bumpers are completely new.

Inside, it’s business as usual, which is an A6 Avant in top-spec form that’s clad in Nappa leather and Alcantara, with Audi’s Virtual Cockpit digital instrument cluster and a flat-bottomed steering wheel. The Virtual cockpit can display a racing-style rev counter, lap times or g-force readings, as well as allow you watch the temperatures for the oil, water and tyres.

To maximise fuel economy and CO2 efficiency, there’s cylinder deactivation (it shuts down four of its eight cylinders during gentler driving), and this time the RS 6 adopts the 48-volt mild hybrid system from the rest of the range. It lets the RS 6 coast (or ‘sail’ as Audi puts it)  between 34mph and 99mph.

The RS 6 Avant comes with air suspension as standard, with variable ride settings - so ‘springing’ stiffness can be increased by 50% in hard driving. There’s also an optional Dynamic Ride Control system, which comes with passive steel coil springs, and adaptive dampers with McLaren-style diagonal interconnection.

The Quattro four-wheel drive system splits its torque 40/60 front-to-rear split by default, but this can vary depending on driving conditions, with up to 70% for front-wheel drive in slippery conditions. And there’s no ‘drift’ mode as you find in rivals from BMW and Mercedes-Benz. There’s a standard Sport rear differential with four-wheel steering, which is combined with dynamic steering and an infinitely variable ratio. This points to many configurations available for differing driving tastes.

It's available for order now, with delivery in 2020.