Porsche has improved its Cayman coupe by making it lighter and more powerful.

This new model is the third in the range, joining the Cayman and Cayman S.

It weighs 1295kg, 55kg less than the top S model. The R has the same 3.4-litre engine, which has been further tuned to release another 10bhp, taking total output to 330bhp.

With a six-speed manual gearbox it will accelerate to 62mph in five seconds - 0.2 seconds faster than the S - and if fitted with the seven-speed dual-clutch transmission that time falls to 4.7 seconds.

The weight savings come from the use of lightweight components and by removing the air conditioning and stereo. It also features a smaller fuel tank and suspension that lowers the car by two centimeters to improve handling.

The Cayman R comes as standard with a limited slip differential and lightweight alloy wheels that reduce weight by 5kg. Aluminium door skins from the 911 Turbo and carbon fibre sports bucket seats also contribute to the weight reduction.

The car comes with a bodykit, including a fixed rear spoiler, black-framed headlights, contrasting side mirrors and Porsche side-stripes all of which differentiate it from the standard models. A special order green metallic, as seen in the pictures, is also available.

The Porsche Cayman R goes on sale in the UK in February 2011, priced from £51,731. Included in the purchase price is a Driving Experience Programme at the Porsche Experience Centre at Silverstone for drivers to learn the limits of their new car. 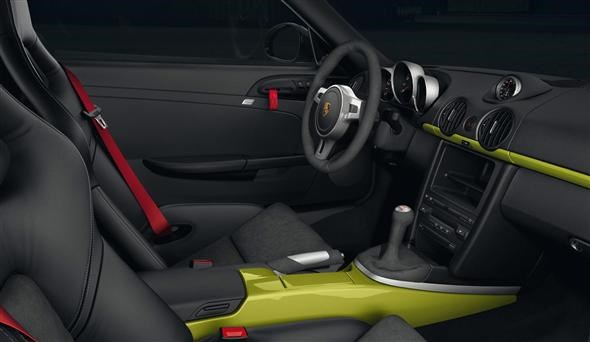 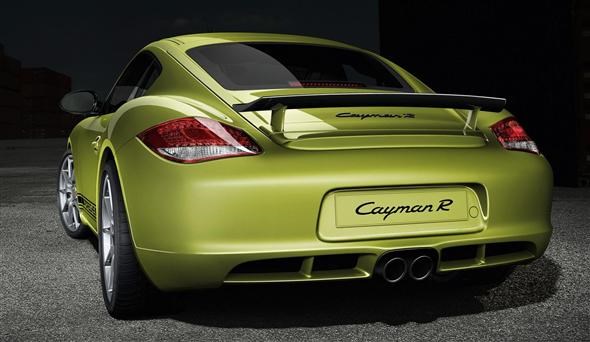