Here are the first pictures of an ultra-exclusive Porsche, named the 911 Speedster.

Available only in blue (pictured) or white, this open-top with a manually operated soft-top will set you back £144,100.

Yikes! So what's special about it?

Apparently its design harks back to Porsches of yore, borrowing various design aspects from special edition 911s from the past 60 years.

That ‘double-bubble' soft-top cover behind the seats is a good example of the sort of design that makes this car exclusive, but to cement that fact Porsche is only going to sell 356 of them - again a number borrowed from its heritage.

Power comes courtesy of a 408bhp 3.8-litre engine, which manages to push the Speedster through 60mph in 4.6 seconds and on to a top speed of 190mph.

There's only one gearbox option - a dual-clutch seven-speed semi-automatic.

What about running costs? 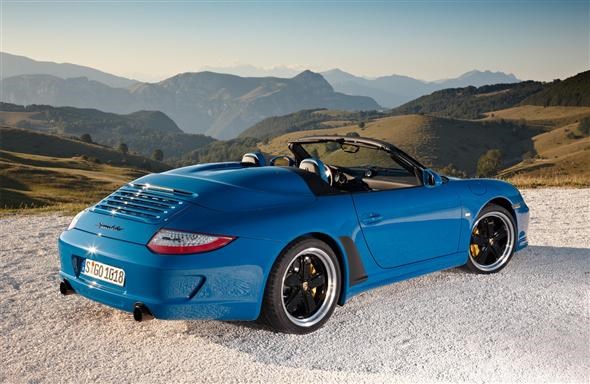