Ferrari has released details of its all-new four-wheel-drive car, called the FF.

The name stands for 'Ferrari Four' and the car is designed to replace the 612. It's the first production four-wheel-drive Ferrari, marking a departure from the company's history of making only rear-wheel-drive cars.

The FF is designed to be used as a luxury grand tourer and as such is claimed to offer high standards of space and comfort, with room for four people and their luggage.

The boot measures 450 litres, 50 more than a Ford Focus for example, and can be extended up to 800 litres if needed.

Powering the car is a 6.3-litre V12, featuring direct injection, that makes 660bhp at 8,000rpm and a road-shredding 683Nm of pulling power - just a tad more than the aforementioned Focus.

As with most Ferrari models these days, the FF features an F1-style dual-clutch gearbox which allows it to sprint to 62mph in 3.7 seconds, and on to a top speed of 208mph.

Ferrari states that its "4RM" four-wheel drive system weighs 50% less than a normal system, maintaining the ideal weight distribution and improving handling. It is integrated with the car's electronics and designed to deliver the best performance in all conditions, including driving on snow and ice.

The FF is also equipped with the latest magnetic fluid based damper system as well as carbon-ceramic brakes for maximum stopping power and frightening servicing bills.

Ferrari has dabbled with four-wheel drive cars before, like the concept 408 Integrale from 1987 which also featured four-wheel steering, yet none of them ever made it to production status.

Despite Ferrari's recent 'green' drive with stop/start systems and regenerative brakes, the FF emits 360g/km - meaning yearly road tax costs of £435 and showroom tax of £950. Average fuel economy is claimed to be in the region of 18mpg.

The car, which was designed by Pininfarina, will be available with a wide range of custom options including six colours and a selection of interior trims.

No pricing or release dates have been announced yet but expect the FF to cost in the region of £240,000. The car will make its official debut at the Geneva Motor Show, so keep an eye out for more news and pictures as Parkers will be covering the event in full. 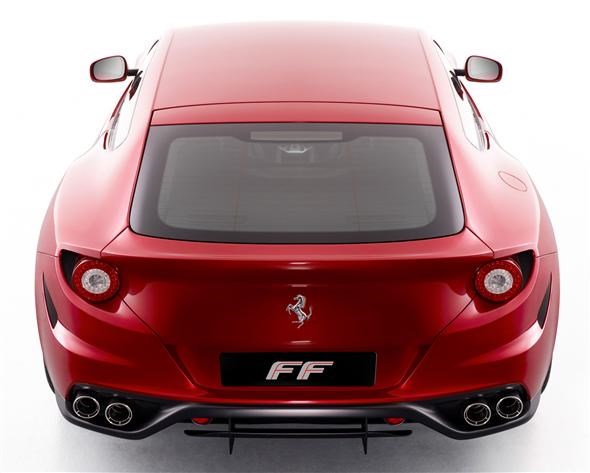