New luxury car firm Fisker has unveiled the Surf which will go on sale worldwide in 2013.

Fisker claims that with the Surf it has found a new niche and like the firm's other model, the Karma, it's powered using an electric power train with range extender technology.

It could be described as a super-barge and, as a fully functional five-door it looks much like Ferrari's FF but only marginally less crass. The idea is to have something sporty, luxurious, and big enough to carry golf clubs in.

The sleek...ish looks do hide what is a reasonably practical car, though. The cargo area at the back is divided into three functional regions. There's a boot for large items such as golf bags and suitcases and in front of that is a raised shelf designers refer to as "the podium," to handily accommodate smaller objects and give useful function to an area constrained by the presence of the electric powertrain's large invertors under the floor.

It uses a petrol engine to turn a 175kW generator while a pair of powerful electric motors drive the rear wheels, taking energy from a 20 kWh lithium-iron-phosphate battery pack carried inside the car's central tunnel. We've no idea of what it might cost we wouldn't be surprised if it's approaching the £100,000 mark. 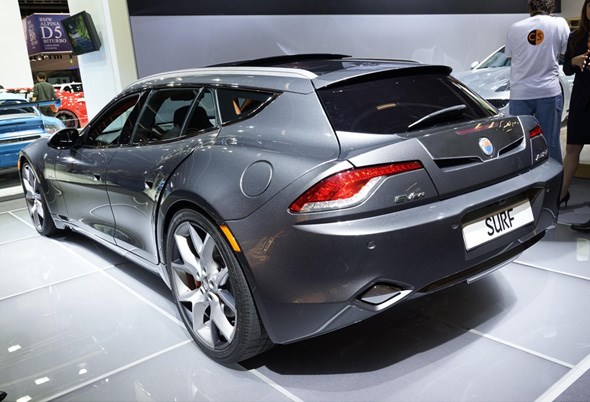