Hyundai has unveiled the latest version of its best-selling i30 model at the Frankfurt Motor Show.

The i30 was the first car to get the brand's now recognised 'i' moniker and quickly became Hyundai's best-selling model.

This latest version of the company's Ford Focus rival now comes with sharper styling reflecting the new design as seen on the recently launched i40, while the interior has been given an upgrade. There's also more room on the inside while boot space has also been improved by 10%.

There will be six engines on offer, three diesels and three petrols, with six-speed manuals or six-speed automatics. The Korean company claims its most popular diesel is likely to be the 1.6-litre turbo engine that produces 127bhp and will cover 0-62 in 10.9 seconds. Its top speed is just over 120mph. Hyundai forecasts that diesels will account for half of all sales.

There will also be an eco version badged Blue Drive that will come with stop/start technology and low rolling resistance tyres which, when combined with the 1.6-litre diesel engine, will reduce emissions to below 100g/km CO2. That makes it competitive against such rivals as the Ford Focus Econetic.

The new model will also come with an optional Flex Steer, a steering system that has three modes which alters the amount of feedback the driver gets to suit different conditions. The i30 will also come with a 7-inch touch screen to display such things as sat nav as per its bigger brother the i40.

The manufacturer has also used the event to show off the saloon version of its new i40 model.

We've already driven the Tourer model, and if the saloon can live up to its standards then it looks like it will be an excellent prospect for both private buyers and company car drivers.

Another car we've already seen is also on show at the Hyundai stage is the Veloster Coupe. There's no new info on the Coupe replacement, but it's another chance to see that interesting 1+2 door design though this time with a matt grey paint finish, carbon finish exterior trim and bar code decals though you still can't take one to the checkout yet. 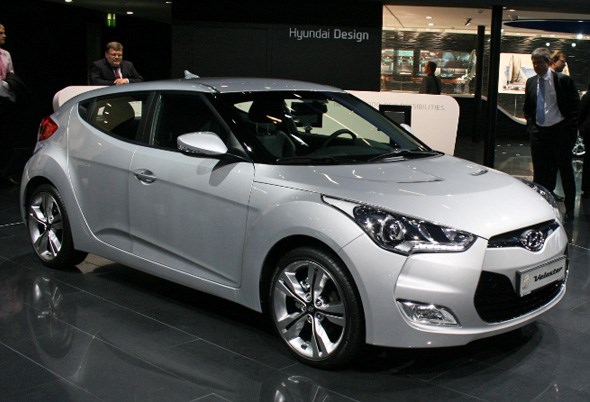