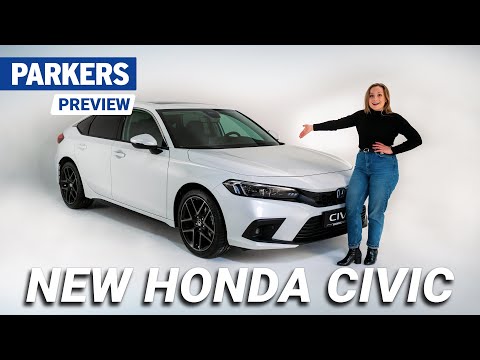 Honda recently pulled the sheets off the eleventh-generation Civic hatchback – and Parkers got the chance to drive the car ahead of its scheduled UK launch in autumn 2022. Early impressions suggest we’re onto a winner, with the Civic offering enough space, pace and grace to stand up to rivals such as the Ford Focus, Volkswagen Golf and Toyota Corolla.

This almost comes as a surprise. Honda took a big gamble with the latest Civic, changing its tried-and-tested formula for the first time in 50 years. Instead of a revvy petrol engine and a snappy manual gearbox, the new Civic features the brand’s e:HEV hybrid system. So, the question is, has the new electrified powertrain ruined the hatchback’s famously engaging driving experience?

Let’s start with the interior, though. It’s better than a Volkswagen Golf, SEAT Leon or Toyota Corolla for a start. Honda’s new 9.0-inch infotainment system has a fast processor, and everything you touch is trimmed in quality materials. Honda even bothered to wrap the Civic’s door pulls in padded leather, which is above and beyond almost everything else in the family hatchback class.

The driving position is well-designed, too. There’s loads of adjustment in the seat and the steering column, which means you can get comfortable even if you’re approaching seven feet tall. The seats also have a good lumbar setting, which keeps you supported on longer journeys.

Thankfully, Honda hasn’t fallen into the trap of burying the climate controls in a sub-menu on the infotainment system, either. They’re on a trio of rotary dials in the centre console, which means they’re far easier to use on the move.

You won’t be wanting for space, either – the Civic has that in spades. Rear-seat passengers will find the new model much more comfortable than the old one, as there’s an extra 35mm of legroom in the back thanks to a longer wheelbase. Headroom is good but, if you’ve got a tall family, we’d suggest sticking with the cheaper Sport model. The sunroof on the more expensive Advance trim robs valuable headroom from those in the rear.

The boot’s a good size, too. You get 410 litres in the Sport model, while the more expensive Advance variant offers 404-litres. However, both of those figures are bigger than pretty much anything else in the class, besting the likes of the Volkswagen Golf, Ford Focus, Toyota Corolla, Mazda 3, Kia Ceed and Hyundai i30. For the money, about the only thing that’s bigger is the Skoda Octavia.

From launch, the only engine you’ll be able to specify with the new Honda Civic is a 2.0-litre hybrid system, which works a bit like the unit fitted to the Toyota Corolla. But, because this is Honda, it’s a little bit more complicated than you’d expect.

Most of the time, the electric motor powers the front wheels, while the petrol engine quietly works away in the background as a generator to feed the motor. Because of this unusual setup, there also isn’t any need for a gearbox between the engine and the wheels.

When you put your foot down, there’s a clutch between the engine and the front wheels which automatically engages to send direct drive to the tarmac. Think of the engine’s contribution like riding a single-speed bicycle – it’s difficult to get up to speed from a standstill, but once you’re moving, it’s far easier to accelerate.

Honda’s done a fantastic job with the Civic’s powertrain. The system works almost seamlessly – and, during our drive, we found two main plus-points. First off, the cabin is incredibly quiet. The electric motors make almost no noise, and the petrol engine doesn’t need to work hard to generate the required amount of electricity to keep the electric motors turning.

It’s efficient, too. Honda says the Civic’s hybrid system achieved 60.1mpg on the WLTP combined cycle. When we stepped out of the car, the trip computer was showing figures well into the 50mpg range meaning, if you drive carefully, you should be able to match the official figures on the road.

Despite the electrification, Honda has also managed to make the latest Civic fun to drive. The hybrid system develops 184hp and 315Nm of torque, which is verging on hot hatchback territory. The 0–62mph sprint takes just 7.9 seconds, which is faster than the most popular 150hp-ish versions of the Volkswagen Golf and the Ford Focus.

The Civic is eager and responsive, especially with the powertrain locked in Sport mode. Honda has also stiffened the car’s chassis by more than 20% compared to the previous model, which makes it go around corners well. However, this isn’t at the expense of ride comfort – the dampers are still supple enough to tackle potholes and they iron out motorway imperfections well.

There are a couple of minor foibles, but neither are enough to ruin the car. The steering is a little dead around the centre, which takes some getting used to. Honda has also programmed simulated gearshifts for the electric motor, which artificially dip the torque and engine revs to make it feel like there’s a gearbox between powertrain and the wheels. It’s a bit of a gimmick.

We’re still waiting on full UK specs and prices, but there’s lots to talk about when it comes to equipment and tech. Because there’s a significant amount of kit available. In addition to its impressive 9.0-inch infotainment system, Sport models will come with a 10.2-inch digital gauge cluster, two-zone air conditioning, heated seats, a wireless smartphone charger and a rear-view parking camera. Honda’s Advance specifications adds a 12-speaker BOSE audio system, a heated steering wheel and electrically adjustable front seats.

All of the data gathered by the camera system is fed into the Civic’s Intelligent Adaptive Cruise Control system, which can manage the car’s throttle and brakes on the motorway. The system will also automatically keep the car in its lane and maintain a sensible distance from the vehicle in front. The driver still needs to supervise the system, though.

Honda hasn’t just relied on electrical systems to keep the occupants safe, though. There’s some good ol’ fashioned mechanical engineering in the latest Civic’s body and chassis should the worst happen.

Improvements over the previous model include a redesigned front crash structure that supposedly absorbs more energy in the event of an end-on collision to reduce the amount of damage inflicted on the passengers’ knees and legs. There are stronger door beams, too, which Honda says can better stand up to side swipes.

The cabin is equipped with 11 airbags. In addition to obvious locations like the dashboard and A-pillars, Honda has added side airbags for the rear seats, knee airbags for the front seats and a new central airbag which deploys between the front passengers to prevent them from clashing heads in the event of a side impact.

The price. Honda hasn’t given us a fixed figure yet, but a spokesperson for the brand has hinted that the Mk11 Civic will cost more than £30,000 when it goes on sale in the UK this autumn. To us, that seems reasonable when you weigh up the amount of standard equipment you get.

We can’t help but think that the average buyer will compare the Civic to its closest rival, the Toyota Corolla, and see a £4,000 difference in price between the two cars. You can get a similarly equipped Ford Focus ST-Line for around £25,000 – so why would you spend the extra cash on the Civic?

It’s still early days (and we’re still yet to drive the car on UK roads), but we reckon that the Civic seems like a good quality, if pricey, product.