Other Hyundai i30 models: 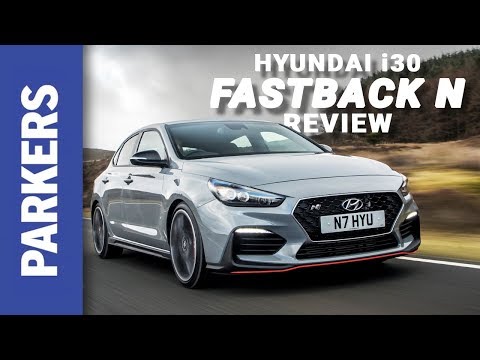 The Hyundai i30 Fastback N takes the foundations of the Korean company’s impressive i30 N high-performance hatchback, and dresses it in a more mature-looking five-door fastback body. Hyundai might bill it as a ‘hot five-door coupe’, but in reality, it’s slightly longer five-door hatch, designed for those who want a more conventionally sporting looking car than the standard i30 N.

The Fastback carries only a small premium over the i30 N hatchback when specified in comparable trim, but succeeds in appearing a more mature and expensive vehicle. Because it’s based on the same wheelbase as the hatchback, rear legroom is identical, with space for six-feet-tall adults sitting behind one another.

That’s not to say it’s any less sporting than its shorter and more youthful-looking sister car, though. However, it still has the same problem as the 130 N – it’s up against some very capable rivals. You might choose it as an alternative to the Renault Megane RS, Honda Civic Type R and VW Golf GTI hatchbacks, or less powerful versions of the Mercedes-Benz CLA.

Its bodywork is both 120mm longer and 21mm lower, however. The key practical gain is an increase in luggage volume from 395 to 450 litres. On the negative side, visibility is poorer through the aggressively raked rear screen and rear headroom is tighter, though neither compromise is likely to be a deal-breaker. You can read more detail about i30 Fastback practicality here.

The front of the cabin is much like the hatchback – the seats are attractive, comfortable and supportive, and come with ‘faux suede’ and leather upholstery as standard, plus there’s heating on both front seats, and electric adjustment and a memory function for the driver’s side.

The touchscreen infotainment system is intuitive to use, features sat-nav as standard, and all controls are easy to find while driving, including drive-mode buttons handily located on the tactile leather steering wheel that adjust steering weight, engine characteristics, suspension firmness and more. While the overall appearance impresses, a majority of plastics do feel hard and cheap on closer inspection.

Unlike the i30 N hatchback, the Fastback N comes only with the most powerful version of the 2.0-litre turbocharged engine. It delivers 275hp, can accelerate from 0-62mph in 6.1 seconds, and averages 34.0mpg and 178g/km CO2 on the combined cycle – respectable, but a good way short in terms of outright pace compared with the similarly potent Megane RS.

Complementing the higher power output are 19-inch alloys fitted with Pirelli P Zero tyres and an electronically-controlled limited-slip differential to increase grip and traction when exiting slippery corners. The i30 Fastback N sets a sporting tone even on a shopping trip – the exhaust has a purposefully gruff bark and power floods in eagerly from low revs.

The steering is weighty, full of feel and quickly responsive, which is right and proper in a performance car such as this. The suspension, however, sacrifices a little comfort for a firm, tied-down feel at high speed – again, in keeping with a well set-up hot hatch.

It’s all in keeping with the high-performance remit, but interestingly it feels more composed than the regular i30 N hatchback, and is a little more restful a long-distance companion. Yes, there’s a harder edge to this car than, say, a Golf GTI, but it feels more than capable of being a car to llve with day-in, day-out. We wouldn’t mark it down for that – far from it.

Buyers have no choice but to have a manual transmission and front-wheel drive – gear shifts are slick but the clutch action feels quite abrupt, and there is some wheel scrabble under heavier acceleration in lower gears. But over a challenging road, the Fastback really shines, with huge grip and composure, strong brakes, precise steering and generous performance.

A Civic Type R feels – and is – both significantly quicker and better transfers its extra power to the tarmac, but the Fastback is a fun, engaging car to drive enthusiastically, feeling every bit as energetic as the i30 N hatchback.

Read on for the verdict on this interesting, grown-up hot hatch

Other Hyundai i30 models: