The further back you go in the Kona, the less room there is. Even the tallest of drivers should be able to find a comfortable driving position with plenty of head and legroom on offer. There’s lots of seat adjustment and the mirrors give a good view of the road behind. Large rear pillars make the interior a little darker than it could be though, and limit over-the-shoulder visibility when changing lanes.

The rear seats, however, are notably tighter. Yes, you should be able to fit four six-footers in the Kona, but those in the rear seats probably won’t be too happy about it. Legroom is a little tight and headroom more so for taller passengers. Thankfully, the rear seats themselves are very comfortable, with good back support available. Like other Hyundais, the Kona has heated rear seats available on higher-spec models.

It may look like an SUV, but the Kona is still a pretty compact car, so you shouldn’t have too much trouble parking. The rear pillars, however, are large, making tight manoeuvring more difficult than it should be – especially in models that lack rear parking sensors and a reversing camera.

The raised driving position does provide a reasonable good view ahead, though, so gauging where the front of the car is should prove less challenging. 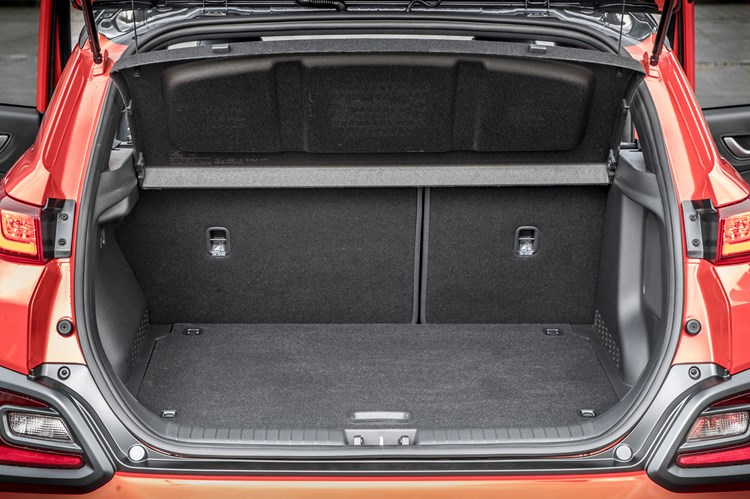 Boot volume is adequate, but the back of the Kona is notably smaller than alternatives such as the Renault Captur and SEAT Arona, which offer up to 536 and 400 litres compared with the Kona’s 334. There is an underfloor tray which adds a bit of practicality, but this is shallow and not particularly useful.

Hyundai’s decision not to fit autonomous emergency braking (AEB) as standard on any of the 1.0-litre petrol models is disappointing, but under the auspices of Euro NCAP when it crash-tested the Kona, this didn't stop it scoring a full five-star rating. Yes, you can pay £235 to get AEB, but we think that Hyundai has its priorities skewed somewhat, considering unnecessary toys like a heated steering wheel and ventilated seats come as standard on some models.

Six airbags, ABS, a Driver Attention Alert system and electronic stability control are all standard, as is a lane-keeping system. Additional equipment fitted to the 1.6-litre petrol include autonomous emergency braking with pedestrian recognition, rear cross-traffic alert and blindspot detection.

The basic equipment list includes equipment that is standard across all versions of the Hyundai Kona SUV.

The Hyundai Kona SUV was tested by Euro NCAP in 2017 and was awarded a 5 star overall rating. This overall rating is calculated from the following individual ratings: