Jag's biggest SUV is good to drive and smartly styled 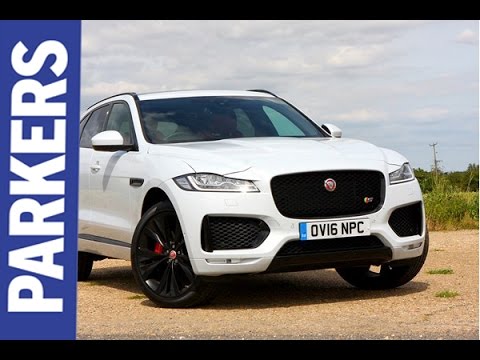 The Jaguar F-Pace is the British marque's first SUV, combining eye-catching, sporty looks and an equally car-like interior that just happened to be hidden behind an SUV size and shape. It's certainly done a lot as part of Jaguar's mission to reinvent itself along with the rest of the updated range.

It shares many mechanical components with the likes of the Range Rover Velar and even other Jaguar models like the XE and XF as it was conceived with a simple mission - to be the best SUV to drive. It's not alone, and it competes for sales with popular premium 4x4s like the Alfa Romeo Stelvio, Audi Q5, BMW X3 and Mercedes-Benz GLC.

To give it an edge over rivals, it makes extensive use of aluminium and other lightweight materials in its construction – and Jaguar says you feel this behind the wheel.

That XE and XF link certainly results in the F-Pace feeling lighter and more agile, with all models delivering decent performance. That lighter weight should mean it's fairly efficient for a big SUV. It's a good place to start, although the F-Pace isn't as light as it should be considering such extensive use of lightweight materials.

>> There's an update for the F-Pace on the way, including a new plug-in hybrid model - find out all the details on what's changed here

When it first arrived, the F-Pace's interior (largely lifted from the XE and XF) looked and felt decidedly sporty thanks to a relatively low driving position in the car, a high window line and high centre console between the seats. That lends itself to impressive comfort levels for some and the driving position is excellent, but those looking for a lofty SUV feel may want a Land Rover instead. That said, you still get an excellent view ahead that SUV buyers crave. Jaguar's managed to create a good blend of SUV and regular car in this regard.

It's starting to feel its age a little now, though, despite a few tweaks over time. A wider infotainment screen has been added and the digital dials are easy to read, but the heating controls look and feel a little old and cheap compared with those you'll find in a Porsche Macan or Audi Q5, for example. Still, it's all pleasingly simple to use, and plenty of soft leather is used across most models.

The boot itself is huge and there’s plenty of room in the cabin as well, with rear headroom only slightly impeded for taller passengers if you’ve got a panoramic roof installed. You can even have reclining rear seats installed as an optional extra for another touch of luxury, amking the F-Pace a better option for families than the Mercedes GLC or Alfa Romeo Stelvio.

We are impressed with the tech on offer, though. Jaguar’s InControl Touch Pro multimedia system is a significant leap over the firm’s earlier offerings and represents a big step forward in terms of its responsiveness and connectivity options. Is it at the cutting edge of what's on offer, though? No. Porsche certainly has the Jag beaten in this regard.

In-car wi-fi along with a number of apps are on hand to make best use of the car’s systems, while other clever features include an Activity Key – a waterproof, wearable car key for those into adventurous pursuits at the weekend – and a powered tailgate, which is standard on all models.

Should I buy a petrol or diesel Jaguar F-Pace?

Unsurprisingly, the F-Pace is strong in diesel form – it was engineered from the outset to make great use of the company's efficient engines. The line-up has changed during the car's life so far, but most buyers will want one of the 2.0-litre diesels for a good blend of performance and economy, although we'd certainly recommend the more powerful V6 diesel if the budget stretches to it. It's smooth, fast and surprisingly economical if you drive carefully.

There's a smaller selection of petrol engines available as well. While these are likely to appeal to some put off by diesel, the fuel economy is likely to be a way off the figures claimed for the diesels. Still, if you're doing lower annual mileage it could make a degree of sense, so do the sums before you commit. At the top of the range is the V8 SVR, which you can read more about further down the page.

As you'd expect, the engineers charged with perfecting the Jaguar F-Pace have done a great job with its dynamics. Unlike a Land Rover or Range Rover, which has to have great off-roading capability in its DNA, the F-Pace doesn't carry this baggage, and therefore should be treated as an off-roader in as much as it will tow a horse box up a muddy hill, and complete a little light green-laning, ably assisted by its intelligent all-wheel drive system.

On road is where it matters to the F-Pace (and where most SUV buyers spend their time anyway) and that's where it scores reasonably well. It’s blessed with good steering and a suspension set-up that's capable of delivering great cornering once you're used to the lofty driving position.

The ride quality is very wheel dependent. On 22-inch wheels, it struggles with bumps and ruts, while feeling fidgety on motorways. On 20-inch wheels, it's a much calmer affair, although never does it really settle down and feel as comfortable as its rivals such as the Mercedes-Benz GLC and BMW X3.

In March 2018, the long-awaited range-topping Jaguar F-Pace SVR was unveiled. It's powered by a 5.0-litre supercharged V8 that F-Type owners will be more than familiar with. It develops 550hp, and it will dash from 0-62mph in 4.3 seconds. Unlike its German rivals, its maximum speed isn't limited, either – so it tops out at 176mph.

It features uprated suspension, a new rear electronic differential to manage the power, torque vectoring, and a Quickshift automatic transmission. To make it look the part, the SVR has a revised and clean-looking front end, and a rear bumper that houses four exhaust tailpipes and a mini flip-up spoiler. Standard wheels are 21-inch alloys, but 22-inch wheels are an option.

Inside, you get slimline leather sports seats with ‘lozenge’ quilting and an embossed SVR logo. Up to four upholstery colour combos can be specced. It's available from £74,835.

Click through the next few pages to read everything you need to know about the Jaguar F-Pace including its practicality, how much it costs to run, what it's like to drive – and whether we recommend buying one.

Mercedes-Benz
GLC-Class
3.7 out of 5 3.7
Advertisement
How much is it to insure?

Side view of 2017 Jaguar F-Pace driving