It may be a hatchback but the Mazda6 has a usefully large boot. With the rear seats in place there is 510 litres of boot space - sizeable although marginally less than both the Vauxhall Insignia (520 litres) and the Ford Mondeo (528 litres).

When you fold the rear seats down, however, you realise the sheer load space of the Mazda6. On paper it has a 1,700-litre capacity. As I needed a new guest bed a trip to IKEA was in order. A quick check with a tape measure revealed it should fit in the car but I wasn't convinced. However I needn't have worried.

The rear seats fold flat easily with the pull of lever located in the boot - extremely handy. Just pull the handle and the seat backs drop while the bases move forward to create a flat load space.

Getting the main parts of the bed in was straightforward but what really impressed is that the double mattress fitted. Okay, it took a bit of pushing and shoving, but it shows the sheer size of the boot that one-person can load a double mattress in without too much hassle.

The only downside is that there is no cargo net to stop smaller items sliding about. 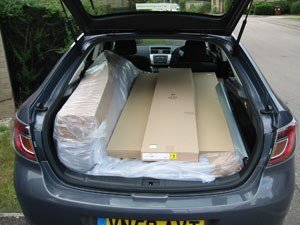