Should you buy a Mazda MX-5?

As a daily driver, the Mazda MX-5 doesn’t make a lot of sense for most users – it’s just too small and impractical thanks to a tiny boot and limited interior storage, but for a weekend away you’ll find the space on offer just about sufficient. It’s obviously never going to be a family car, either, but there is Isofix on the front passenger seat for a semblance of family usability.

However, if neither of those things bother you, you should buy an MX-5. It’s without a doubt the best way to get drop-top roadster fun on a small budget.

Nothing at this price point can touch the Mazda for sheer fun factor. It doesn’t have the performance of a similarly priced hot hatchback (nor the practicality), but there’s little to match the appeal of the MX-5’s simple folding roof, perky engines and fantastically driver-focused experience. As cars become increasingly complex with multiple drive modes to choose from, the MX-5 is refreshingly simple when you just want to get in and have an enjoyable drive.

Rivals such as the Audi TT and BMW Z4 are both larger and more powerful, but also more expensive. Those simply after a fun car and view the folding roof as low priority can look towards the Toyota GT86 or Subaru BRZ for similar levels of performance and simplicity

There are two engines available and which one to choose is a tough decision to make. The 2.0-litre is the one to go for as it's faster, more flexible and just as much fun to work as the 1.5-litre. But, the difference between the cheapest 1.5-litre engine and this larger engine is more than £4,500, so it's a pricey decision. Take a long, hard look at the spec list and running costs before making your decision, too, as there are some noticeable differences in price.

Either way, though, you won’t be disappointed. The MX-5 is a bona fide sports car no matter which spec you choose as they all contain the simple formula of being a fun-to-drive roadster that's also comfortable and affordable to run. We're just glad the 2.0-litre exists for keen drivers who will make good use of the differential and trick suspension for a more involving experience.

These top-spec models also offer plenty of kit, but the only absolute must-have function is the heated seats - and all models come with these as standard. They allow the MX-5 – with the addition of some warm gloves – to be a real all-weather convertible.

If you want an automatic gearbox, you'll have to look at the RF and its folding hard-top roof, but we wouldn’t recommend specifying it unless you really have to. Part of the MX-5’s charm is its incredible manual gearbox, which is snickety, precise and truly one of the best on the market. 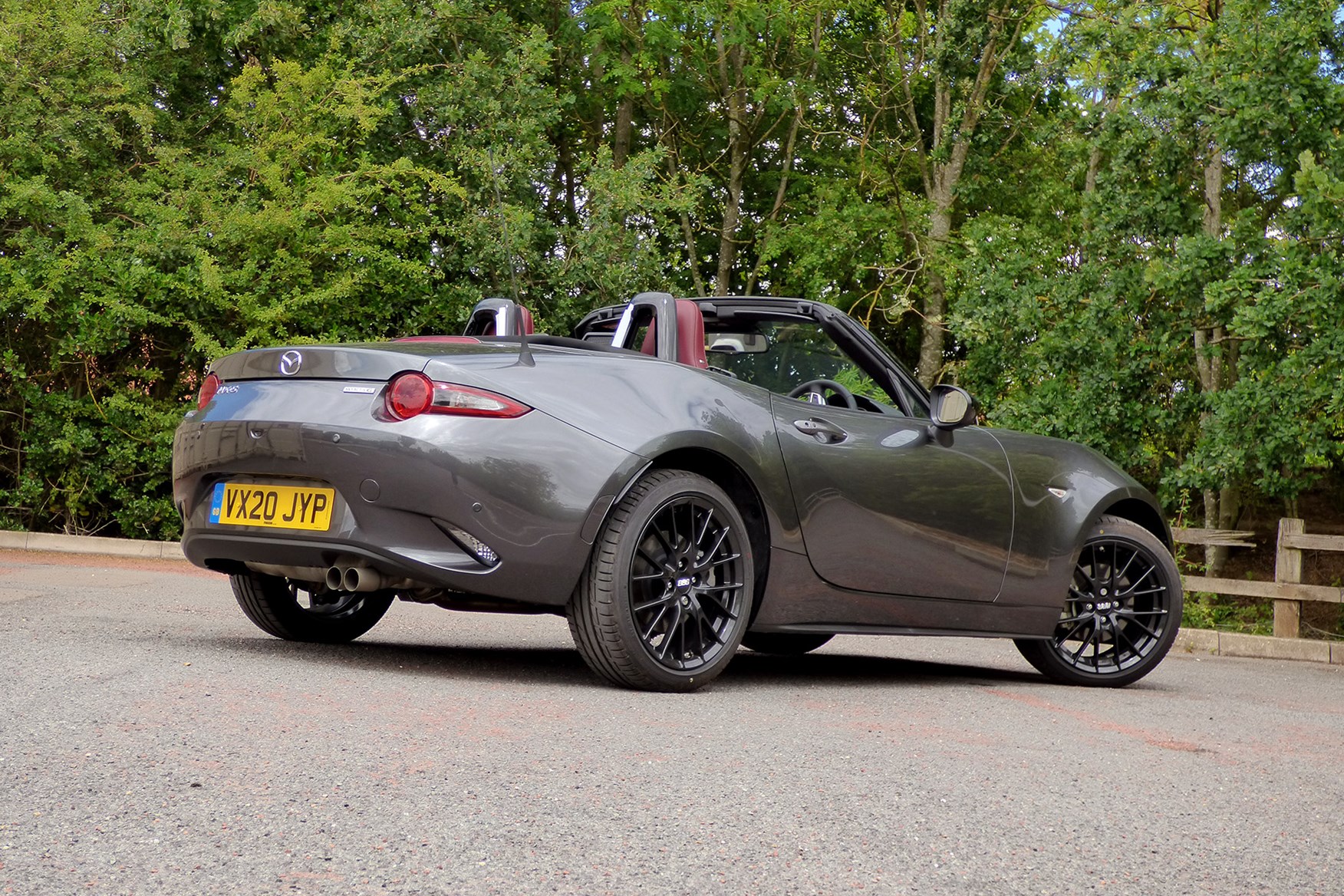 Should I get one of the special editions?

Since the Mazda MX-5 was launched in 2015, the range has never been shy of a special edition.

For us, the well-equipped Icon trim and lively nature of the smaller 1.5-litre engine suit the MX-5’s personality perfectly, though some might bemoan the lack of torque and more comfort-focused road manners.

The 2.0-litre model should address any such issues but at the expense of the smaller motor's ability to entertain so much at lower speeds, so we think the Icon is one of the best MX-5s to go for if you can find a used one out there, as they sold in limited numbers.

The Sport Recaro was the first of many special edition MX-5s, and is the ultimate in terms of kit and luxury.

We think the smaller 1.5-litre engine on 16-inch alloys is more enjoyable for keen drivers, though, which is where the Icon above comes into play.

The Sport Recaro is worth seeking out, as the 2.0-litre engine is a really flexible unit that’s good for every day driving and if you use your MX-5 on the motorway.

The Alcantara-trimmed Recaro seats exclusive to this model are particularly good though, offering huge levels of comfort, grip and support, so you can really enjoy the experience.

Aesthetic parts aside, the Sport Recaro drives just like other 2.0-litre models.

Those lucky enough to get their hands on a limited-edition Arctic won’t be disappointed with their choice of spec. It comes with all the kit most customers will ever need and considerably undercuts the more premium Sport Nav model sold alongside it at the time.

The 1.5-litre engine is only available on this model.

While the Arctic had subtle styling cues to differentiate it from the rest of the range, the Z-Sport came with its own bespoke look and is limited to 300 models

Based on the 2.0-litre Sport Nav, all the extra cost of this model goes on cosmetics, with BBS wheels, grey paint and a burgundy roof. Inside, you get a sand leather interior.

Performance is also the same: with 160hp and 200Nm of torque, but oddly, this didn’t feel as urgent as previous examples we’ve tested – chiefly the Sport Recaro from 2016 – which, not only felt more eager to accelerate, but also made a louder, rorty noise in the cabin

The driving position also seems to have been raised a touch by this point – which may compromise comfort for those who are taller.

This special edition launched in 2019 celebrates the launch of the original MX-5. Finished in Racing Orange paint, this uses the 2.0-litre 184hp engine, front Brembo brakes and forged aluminium Rays wheels. Bar some orange colour coding, the MX-5 is mechanically the same. Inside, you got Recaro seats and Alcantara on the dash and doors.

You won’t find such pure, unadulterated fun as the Mazda MX-5 at this price anywhere else on the market – and that’s really its biggest selling point. It’s simple and great fun, like a roadster should be.

Return to Introduction
Advertisement
How much is it to insure?