Buying used brings almost unlimited choices if you're looking to buy one of many Mercedes-Benz GLE cars for sale. You can click the links below to search through a wide range of cars for sale across the UK. As well as that, you can use our search tools to tailor your results based on price, location, engine and trim – depending on your own personal preferences. With Parkers, you'll be able to find the right used car at the right price for you.

Want all the benefits of a new car but at a significant cost saving in cash terms? Buying a nearly-new car generally brings you the remainder of the manufacturer's warranty, full main dealer support, and a used car with low miles on it. To search for nearly new Mercedes-Benz GLE cars for sale on Parkers, click on the links below. You will find the best cars for sale near you, and by using our search tools, you can narrow your choice, and find the perfect Mercedes-Benz GLE at the right price.

Impressively tech-laden and available as a diesel PHEV

What is the Mercedes-Benz GLE?

The Mercedes GLE is a large SUV – equivalent to the E-Class Saloon and Estate cars in the Mercedes-Benz range.

This second-generation model (W167) launched in 2019, and is absolutely crammed with high-tech equipment; although not all of it comes fitted as standard, the initial UK range is limited to AMG Line trim only, which is pretty fancy.

At a glance 2019 Mercedes-Benz GLE specs

Which versions of the Mercedes-Benz GLE are available?

The Mk2 GLE is only available in the one large SUV body style at present; though an updated coupe may follow, currently the old version (C292) is soldiering on.

Still, the second-gen GLE is available with seven seats when the first-gen model was limited to five – in fact, only the entry-level GLE 300 d engine gets a five-seater variant. 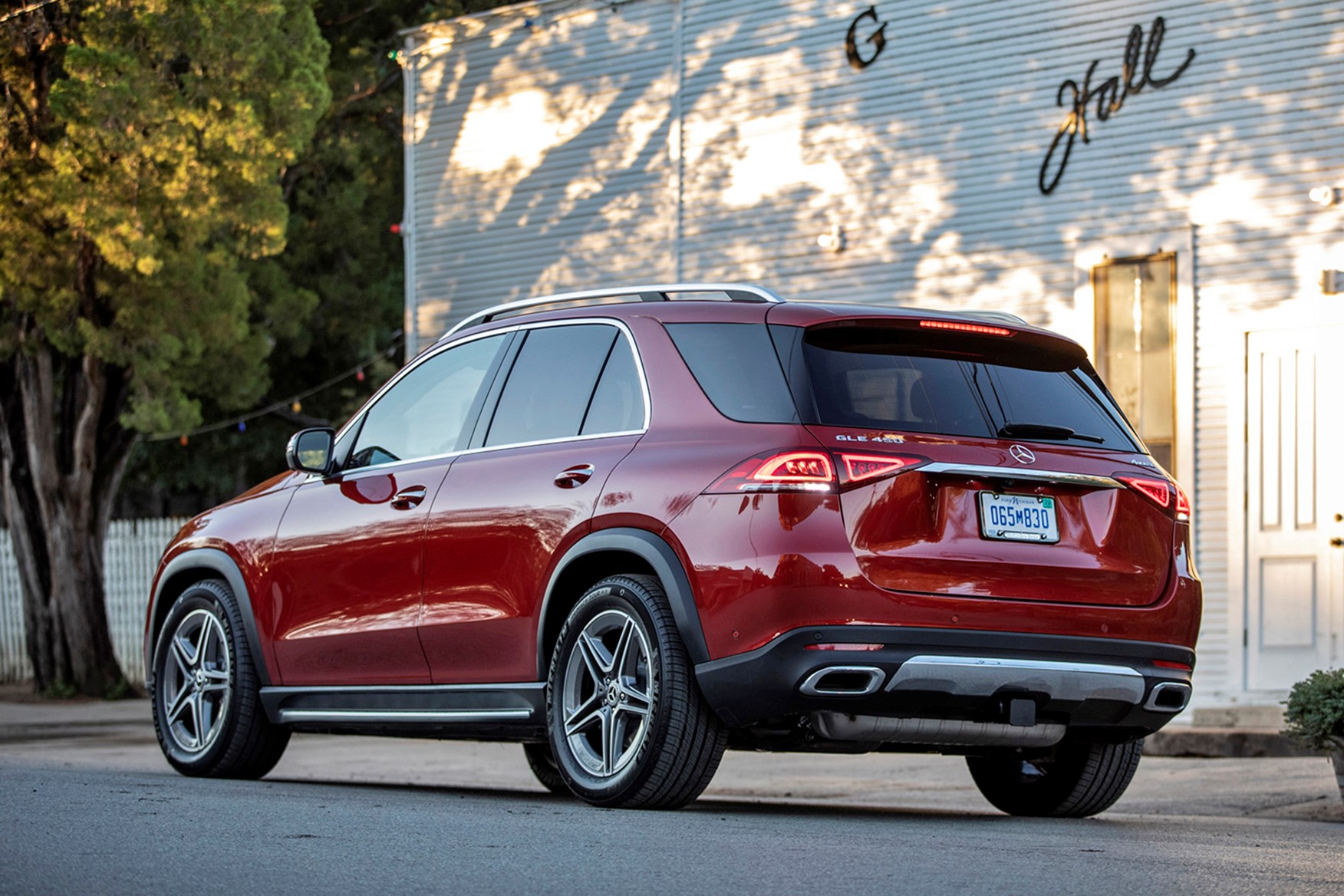 You can also buy a GLE 450; this is a 3.0-litre straight-six turbo petrol with EQ Boost hybrid system – which in performance term means you get a nominal 367hp plus another 22hp from the electric motor, primarily focused enhancing low-speed response.

All UK models are AMG Line at launch, with the option to enhance this with a Premium pack and a Premium Plus pack if you want to easily upgrade the amount of standard equipment.

Naturally, there is an extensive options list as well, and Mercedes-AMG high-performance variants will become available in due course.

The previous Mercedes GLE was an evolution of the old M-Class, and had become rather ungainly. This second-generation model is a clean sheet design, and very sleek and modern as a result.

In fact, in many ways it epitomises modern Mercedes-Benz, as in addition to the svelte exterior there is an interior that’s dominated (on AMG Line, at least) by twin 12.3-inch digital screens – one for the instrument cluster and one of the MBUX infotainment system.

These are positioned in parallel so they look like one giant display. It makes a sensational impression. The ‘Hey Mercedes’ voice control system is also a nice feature, though it and the gesture control options both feel like they need a little further refinement.

Unsurprisingly, this is also a very spacious car, though access to the rear-most seating row is tight, ensuring it’s best-suited to nimble children.

Is the Mercedes-Benz GLE good to drive?

There are some surprisingly sporty cars in the GLE’s list of potential rivals – the BMW X5 and Porsche Cayenne in particular.

But Mercedes has elected to largely dodge that bullet by pointing its large SUV in the more sensible direction of comfort – something that it does very well.

This is especially the case where the Airmatic air suspension is fitted; sadly Airmatic isn’t available on the 300 d, which is likely to be the biggest seller.

Speaking of the 300 d, despite being one of Mercedes’ most modern diesel engines, it still sounds a little gruff; the bigger, six-cylinder motors are smoother and quieter, and worth the additional outlay if you can afford them.

The standard-fit nine-speed automatic gearbox works well, and every GLE gets 4Matic four-wheel drive, which can be enhanced by an Off-Road package if you’re really keen on ruining that expensive bodywork.

How much does the Mercedes-Benz GLE cost?

Mercedes-Benz is a premium brand that commands premium prices, and the GLE is typical in that it’s usually just that bit more expensive than an equivalent Audi Q7 or BMW X5.

Finance pricing is also on the high side – although it is a very new vehicle at the time of writing, so this to be expected. PCP and PCH bargain hunters are better off looking at the Q7, though.

Want to find out what other buyers think? Read our comprehensive Mercedes-Benz GLE owner’s reviews.

Mercedes-Benz GLE models for sale
Back to top
Sign up to receive the PARKERS newsletters and receive: