Buying used brings almost unlimited choices if you're looking to buy one of many Mercedes-Benz SLK cars for sale. You can click the links below to search through a wide range of cars for sale across the UK. As well as that, you can use our search tools to tailor your results based on price, location, engine and trim – depending on your own personal preferences. With Parkers, you'll be able to find the right used car at the right price for you.

What is the Mercedes-Benz SLK?

For two decades and three generations of model, the Mercedes-Benz SLK name was synonymous with upmarket-but-dinky roadsters.

Launched in the UK back in 1996 as the Mercedes-Benz SLK-Class, it was the first small, more affordable two-seater convertible from the German carmaker since 1955's 190 SL. 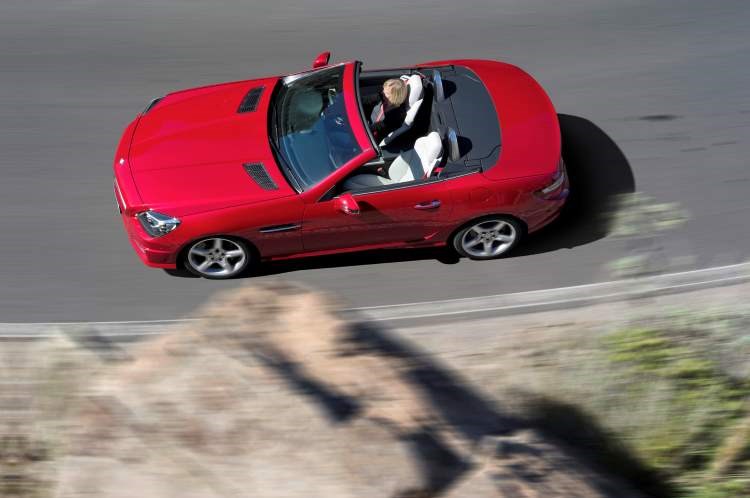 It was an innovative product for the company as it reintroduced - and significantly improved upon earlier iterations of - the concept of the folding hardtop in an era when this technology was still very much in its infancy. This basic layout has been retained for all subsequent SLKs.

Although you can no longer buy a new car badged SLK, the final third-generation version, often known by its R172 development code, was facelifted in 2016 and renamed Mercedes-Benz SLC.

On paper, the SLK's a direct rival for the likes of the Audi TT Roadster, BMW Z4 Roadster and even the mid-engined Porsche Boxster, although in reality it was a different proposition alogether.

Which versions of the Mercedes-Benz SLK were available?

Although there were relatively few third-generaton Mercedes-Benz SLK Roadster permutations compared with the brand's other ranges, there was potential confusion as the numerical aspect of the model name rarely coincided with the engine capacity.

Take the petrol-powered SLK 200 and and SLK 250, both of which featured a four-cylinder 1.8-litre supercharged motors in two different states of tune. 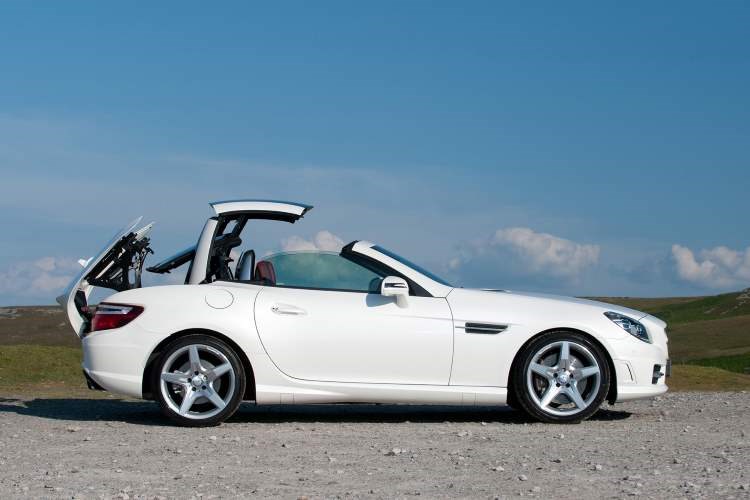 All SLKs barring the V6 were available with a six-speed manual gearbox, although the vast majority are equipped with the more desirable seven-speed 7G-Tronic automatic, complete with a steering column-mounted gear selector.

Trim levels are similarly simple: you've either got an entry-level standard level of specification or the gussied-up AMG Sport, the latter being the only one available with the SLK 350.

What is the Mercedes-Benz SLK AMG?

For each generation generation of SLK, the fastest has been fettled by Mercedes-Benz's AMG division. Performance was suitably beefed-up, with the final incarnation of SLK 55 AMG being capable of thrusting from 0-60mph in 4.5 seconds. 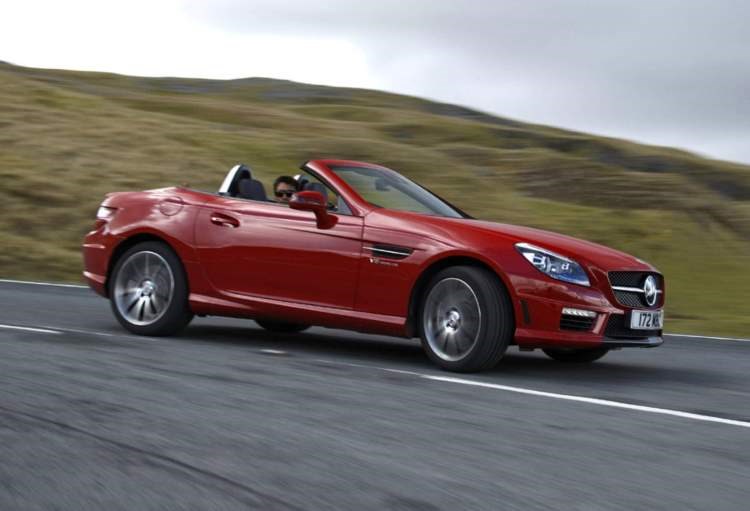 Despite its petite dimensions, AMG shoehorned a 5.5-litre V8 engine under the SLK's bonnet, producing a rudely healthy 421hp and a sonorous exhaust burble.

Although the SLK's much more than simply the street theatre of its folding roof's contortioning performance, it's not an out-and-out sports car like many two-seater roadsters. This final generation shared many design and engineering elements with the larger Mercedes-Benz SL Roadster, itself long-since evolved from the lightweight sportscar the original was.

Consequently it's heavier and broader than many of its rivals in order to emphasise the car's comfort and everyday usability. After all, roof-up, the SLK's essentially an accomplished two-door coupe, albeit without the convenience of a tailgate. 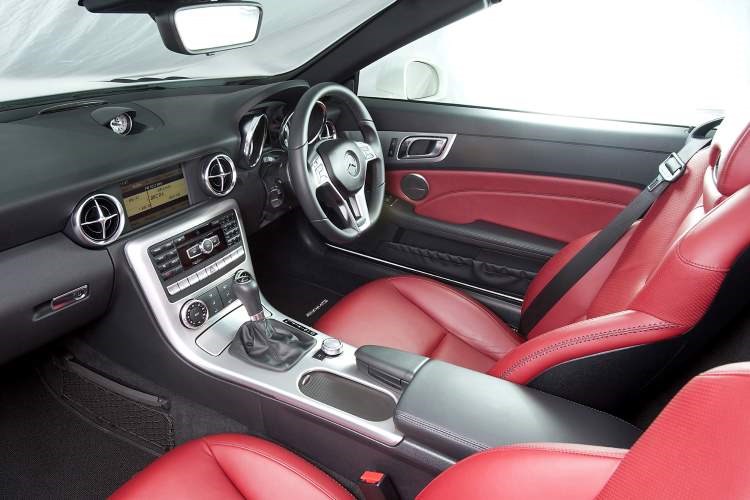 Overall, the platform engineering is sophisticated but traditional: all SLKs have their engines mounted up-front, with the transmissions directing power to the rear wheels.

Was the Mercedes-Benz SLK good to drive?

Don't be fooled by the roadster marketing, the SLK was a comfortable cruiser with a roomy cabin, comfortable seats and on the whole, relaxed steering and supple suspension. Although the third-generation was notably sharper than the two before it, other contemporary sports cars trumped it in the handling stakes.

That's not to say that the SLK wasn't enjoyable - the AMG-badged versions in particular were very lively - but ultimately Porsche's Boxster was the roadster of choice for enthusiasts who wanted to be truly sated.

Not that such a notion held the SLK back as it sold well - there's an undoubted gravitas to having a car with a three-pointed star being parked on your driveway.

How much does the the Mercedes-Benz SLK cost?

On list price alone, the SLK was competitive, but options soon pushed that cost skywards. Popularity with fleets, the age of the car and the relative competitiveness around the roadster market have ensured some impressive incentives were available, and at times the leasing figures for an SLK dipped below £250 per month.

Running costs are very dependent on model. Go for an SLK 350 or SLK 55 AMG and you'll find servicing and consumable prices match the performance: they're high. Regular four-cylinder versions are cheaper to run and as the cars get older Mercedes has a policy of keeping consumables and mechanical spares affordable.

Find out what this generation of roadster is like to live with in our Mercedes-Benz SLK owners' reviews. 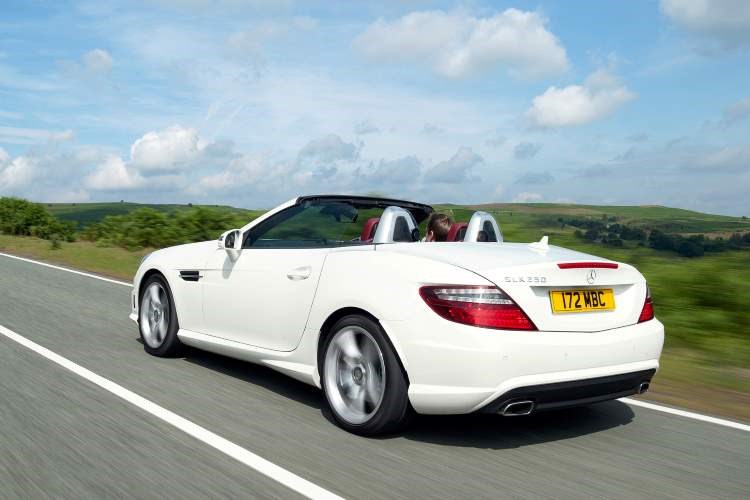 Mercedes-Benz SLK models for sale
Back to top
Sign up to receive the PARKERS newsletters and receive: