Striking looks remain, but second generation Juke is so much better than before 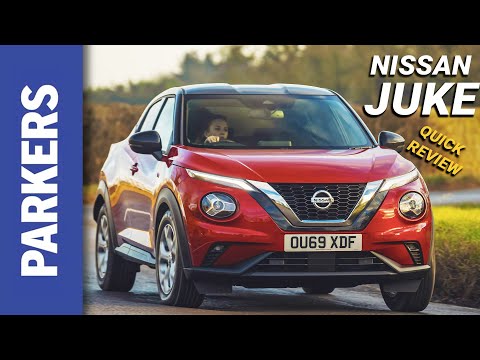 Nissan credits the Juke with creating the current craze for supermini-sized SUVs. And though it’s not quite the granddaddy of the segment, there’s no denying it came along and kickstarted the market, helping to reinvigorate Nissan's range. Since launch in 2010, more than a million Jukes have been sold worldwide – with all European models built at Nissan’s factory in Sunderland.

The original Juke was the wacky, youthful foil to the sensible Qashqai family-sized SUV, which it sits beneath in Nissan’s range. It gained notoriety due to its eye-catching looks, but the relatively compact dimensions meant it also found favour at both ends of the marketplace – with young buyers appreciating the style, and older motorists enjoying the high driving position and light controls.

Now in its second generation, the Juke still trades on its looks, which are still distinctive and divisive but rather refined compared with the original. Design cues from the first car, such as the hidden rear door handles, upside-down headlight configuration and wheel-at-each-corner stance have been carried over and sharpened, and one could even say the new Juke looks quite smart. It’s certainly going to attract fewer disgusted stares than the rather blobby Mk1.

At the beginning, the Juke had just a few competitors, but now the market’s changed considerably – Nissan reckons it has 24 cars to compete against, including Parkers favourites such as the Volkswagen T-Cross, Skoda Kamiq and Citroen C3 Aircross, as well as quirky alternatives like the Hyundai Kona, the all-round Renault Captur and stylish Peugeot 2008.

Refined looks inside and out

Sitting more comfortably in the Nissan range than it did before, the Juke melds design cues from the Qashqai SUV and Micra supermini with its own indomitable style book to create a body that looks like nothing else on the road. Full LED lights come as standard, and the round headlights feature an integrated three-pointed star that’s rather akin to a certain German manufacturer’s badge.

A sloping roofline, sharply rising window line and hidden rear door handles – plus the addition of a ‘floating’ C-pillar and optional contrasting roof colours lend a much more convincing coupe effect to the car’s rear profile than before. Meanwhile, wheels of up to 19-inches in size give the car a good stance on the road, and look smart, too.

Inside, there’s clear influence from the Micra, with a strip of faux-leather or fabric across the dash, doors and centre console. But a new multimedia screen sits high and proud, bringing the car well up-to-date with the latest smartphone connectivity.

‘The most connected Nissan ever’

Connectivity is a clear focus with the Juke. Nissan’s pushed the boat out, fitting top-level cars with the usual sat-nav and smartphone connectivity in the form of Apple CarPlay and Android Auto, but also a host of app-controlled features to keep you constantly informed of your Juke’s status.

App control lets you remotely lock and unlock the car as well as pre-load destinations and settings into the sat-nav, while also remotely monitoring consumables such as tyre pressures and fuel level. For the real technophiles, this tech can also be accessed through a Google Home smart speaker, allowing you to ‘talk’ to your car through your home.

Choosing a Juke from its range of trim levels and options can be tricky, but luckily the choice of powertrain is an easy one. There’s just one for now – a 1.0-litre turbocharged petrol engine available with either a manual or an automatic gearbox.

Performance isn’t exactly sporty but the responsive and quiet engine proves a respectable companion around town, although the automatic transmission can be jerky. Combined with a chassis that’s nicely balanced between handling and comfort, there’s plenty to recommend this Juke as a city runabout – but only if you avoid top-spec models with the large alloy wheels.

They may look great but they make the Juke quite fidgety on the road. The lack of a hybrid or fully electric powertrain does sting as well, especially when the Renault Captur (with which the Juke shares many of its underlying components) is available with a plug-in hybrid option.

Click through the next few pages to read everything you need to know about the Nissan Juke including its practicality, how much it costs to run, what it's like to drive – and whether we recommend buying one.