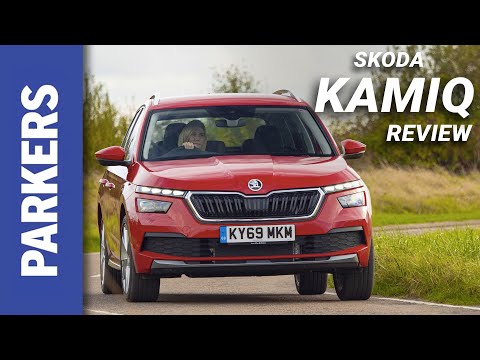 We won’t beat around the bush – we think the Skoda Kamiq is one of the very best compact SUVs on sale today. When we pitted it against its main rivals, including the Parkers award-winning Ford Puma, it came in a very close second. That’s high praise.

The Kamiq is the smallest SUV in Skoda’s three-strong lineup, sitting under the excellent Karoq and Kodiaq. As befits a Volkswagen Group SUV, it shares many of its oily bits with the SEAT Arona and Volkswagen T-Cross.

In styling terms, it puts clear water between itself and its sister cars – and surprisingly looks different to its bigger siblings, too, with its eyebrow-style daytime running lights and prominent grille. Look at the boot lid, and you’ll find the Skoda name spelled out across the tailgate like the smaller Scala hatchback. If that impresses you, get a load of this: it’s also the first Skoda to have both front and rear dynamic indicators.

Small SUVs are a massively popular – and growing – market sector in the UK. As such, the Kamiq has a lot of opposition. The aforementioned Ford Puma is the driver’s choice, but there’s also the stylish Nissan Juke and Peugeot 2008, pragmatic Kia Stonic and Hyundai Bayon, and even posh options such as the Audi Q2 or Mercedes-Benz GLA.

It's very much a Skoda in terms of design and switchgear, with the dashboard largely lifted from the Scala hatchback, but the touchscreen infotainment system follows the fashionable form of being positioned high up and floating free. So it looks like an iPad-on-the-dash and comes in one of three sizes depending on the model. You also get a fully digital instrument panel, which is rapidly becoming a common feature of cars in this market sector.

The Kamiq gets a longer wheelbase than the SEAT Arona, which Skoda says affords it more space in the front and rear than the cars it’s competing for sales with. Luggage room is also competitive, with a seats-up capacity of 400 litres, which expands to 1,395 litres with the rear down.

What engines and transmissions are there?

It's based on Volkswagen Group's MQB AO architecture, shared with most smaller SEATs, Skodas, Audis and VWs, which means it has all-independent suspension on pricier versions. But if you want four-wheel drive, you're going to have to look elsewhere – it's front-wheel drive only.

Our experience of Skoda SUVs are that they generally ride more softly than their SEAT and Volkswagen cousins, and it’s very much the case here, although it still feels nicely balanced and corners almost as well as a SEAT Arona. This would explain why the Kamiq is optionally available with Sport Chassis Control, which gets adjustable dampers and a lower ride height, while remaining impressively comfortable at other times.

The engine range doesn’t offer up too many surprises – a pair of 1.0-litre TSI petrols (95 and 110hp) as well as the 1.5-litre TSI Evo developing 150hp. If you want diesel, a 1.6-litre TDI in 115hp form was offered. There’s a choice of six-speed manual and seven-speed DSG gearboxes available depending on the engine configuration.

The Kamiq is available in S, SE and SE L trim levels, with a Monte Carlo range-topper if you want a more aggressive look and a few sportier touches inside and out. Don't expect any additional performance, though.

All models come with LED lights, alloy wheels, air-con, touchscreen infotainment and DAB radio. You'll want to move up to SE for automatic control of the headlights and wipers and a bigger media screen with Apple CarPlay and Android Auto connectivity.

Our leasing partner, ZenAuto is offering Skoda Kamiqs from £240 per month. The usual terms and conditions apply.

Click through these pages to read everything you need to know about the Skoda Kamiq including its practicality, how much it costs to run - and whether we'd recommend buying one.