I hate to admit it but like many modern motorists I've become more and more dependant on satellite navigation. It's not that I can't read a map - but having a system that calculates the quickest route and then gives you instructions at every junction and roundabout is so much easier!

There have of course been plenty of stories of sat navs going wrong. Mostly involving huge articulated lorries getting stuck in narrow villages or under low bridges. Thankfully there's not quite the same worries in the vRS but that still can't disguise the fact that the navigation system fitted to the Octavia is hopelessly out of date.

Amazingly, despite the fact the system costs £1,350 it still runs on a CD, where most rivals use a DVD. But perhaps more astonishing is the fact that the same sat nav is the mainstay across most of the Volkswagen, Skoda and SEAT ranges. Compared to portable systems from the likes of TomTom and Garmin it looks dated - the maps and symbols aren't as slick or easy to read.

But worse is the time it takes to work out a route. That's not too bad when you're sat outside your house, but if you decide to plan a route while on the move - or attempt to avoid some traffic it seems to take an age. It's certainly not ideal when you've got less than a mile to decide which motorway junction to take.

On a recent trip to Luton airport I thought I'd test it out, but it decided to have a strange turn on the way. Against my better judgement I thought I'd give it the benefit of the doubt and follow it anyway. Which was a mistake as instead of arriving at the car park at the airport I ended up in a residential street nearby. From now on I'll be keeping a UK road map on the back seat. Just in case. 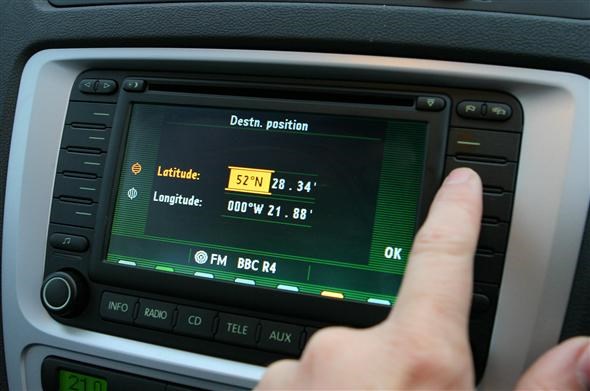