It's snow joke (sorry) for Skoda

As the snow continued to fall and the fun of throwing snowballs and building a snow bunny (don't ask) started to wear off the realisation that we would have to somehow head back to Peterborough, to see family, dawned on us.

Gatwick and Heathrow had closed down, the London transport system had ground to a halt and the Yeti now sat in six inches of snow. Surely this wouldn't matter; the Yeti should be used to this weather, shouldn't it?

After doing my best to clear the most of the white stuff off of the roof - apparently not clearing this could mean an on-the-spot penalty of three points and £60 if you're caught by the police - we jumped in to get on our way. While we hardly live in the middle of nowhere, our street in North London is pretty quiet meaning little traffic and no gritters. Plus, having seen a number of cars struggling on the roads, it was going to be a decent test for the Skoda.

The worst bit was going to be negotiating the smaller roads, with cars parked either side of them, and other cars attempting to still get around. Fortunately I had just the thing to deal with this, the Yeti's four-wheel drive and the off-road button.

This comes as standard on our Elegance model, along with some useful features that came in handy on the ice and snow covered roads. The car already has uphill assist which helps the car pull away on slippery surfaces but the off-road button also engages ASR (Anti-Slip Regulation) which improves acceleration on slippery surfaces. It also uses an EDL (Electronic Differential Lock) system which was perfect for the icy conditions as it helps the car maintain permanent traction by braking the slipping wheels and cutting power.

We may not have been tackling the Tundra but the conditions were an excellent test for the Yeti's regular four-wheel-drive as well as the off-road mode. So, as my colleagues questioned which car they wanted to take for the bleak winter weather, I'm safe in the knowledge my car can take on a battle with Jack Frost and come out on top. 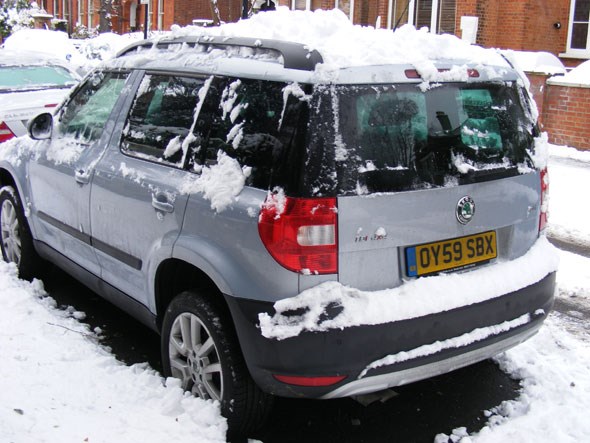