Over the past few weeks the trip computer in the Auris started to reveal that the average fuel economy was improving. Usually it'd hover around the indicated 47mpg mark but, over a few tanks of fuel, it had crept up to just over 50mpg. Working it out on paper showed that the actual economy had risen from 44mpg to 47mpg.

Because my driving style and the usage of the car had remained the same, I could only assume that the increase in economy was due to the milder weather that we've been experiencing. A cold engine uses more fuel until it warms up and this makes even more of an impact in the Auris as the engine is constantly cycling off and on, meaning it can take some considerable time to reach proper operating temperature.

I've also had the opportunity to use the Auris for several long trips, which has led to another hybrid compromise becoming apparent. As the battery in the Auris is mounted in the rear, reducing the available boot space, Toyota has also had to shrink the size of the fuel tank. A normal petrol 1.6-litre Auris has a fuel tank of 55 litres (12.1 gallons) - which means that if you match the quoted 39mpg average you'll be able to cover just over 470 miles. Drive a 1.4-litre diesel version and you could average 59mpg and cover almost 720 miles

The hybrid version, however, has a fuel tank that holds 45 litres (9.9 gallons) - almost 20% less. Now, if you could average the quoted 70mpg you'd go a meaningful 700-odd miles, like the diesel - but if, like me, you average more around the 45mpg mark then you'll potentially cover just 445 miles.

Interestingly, despite this, I only seem to average 350 miles to a tank from brim to near empty at the moment, meaning that either the Auris holds a couple of gallons in reserve, just in case, or that the fuel gauge and range remaining indicator is overly pessimistic. This might not seem like much of an issue but it means that, unlike the conventional diesel or petrol version, I have to stop for fuel at least twice a week.

I don't intend to find out how far it'll go with a supposedly empty tank, though - the one-mile range on battery alone doesn't instill me with enough confidence to test my luck...

Milder weather is helping the engine warm up faster. 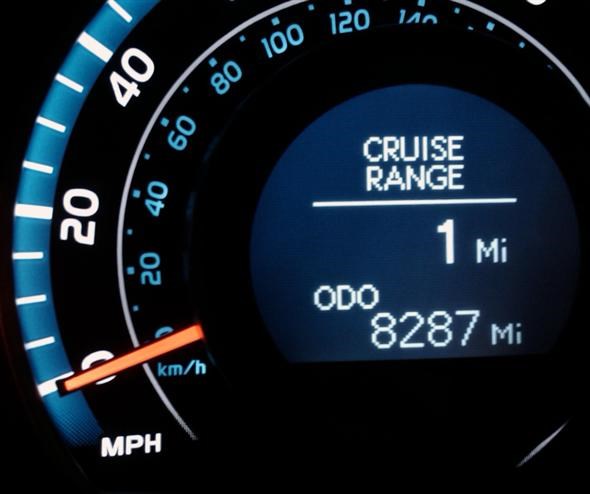