It was coming up to 11 o'clock as we set off on a late-night 210 mile round trip to Brighton. This gave me an opportunity to reflect on some of the pros and cons of Toyota's hybrid Auris.

Firstly was the lack of sat-nav. You can specify it but it's a £1,226 option on top of the purchase price of £21,675. This seems unreasonable when you consider that on a Ford Focus it costs an additional £550, or £855 on a Vauxhall Astra - both of which are cheaper to buy and in some instances better equipped.

Passing London, some of the green benefits crossed my mind. The Auris is exempt from road tax and congestion charging, thanks to its sub 100g/km of CO2 emissions. This means that if you commuted into the congestion charge zone, on a daily basis, you'd save around £2,520 a year in fees alone.

Later, while finding somewhere to park, a major benefit of the Auris made itself apparent - its reversing camera, standard on T Spirit models. When you select reverse a portion of the rear view mirror becomes a small screen, showing the view behind you and an outline of the car, allowing you to fit it into gaps with ease. I found that it even works well at night, as enough light is cast by the reversing lamps to allow for a clear view.

This feature, combined with light controls, a tight turning circle and electric drive, makes the Auris easy to drive around town while being economical and quiet.

On the motorway, however, the operation of the CVT gearbox is noisy and tiring, especially when overtaking or travelling uphill. You also don't get any real benefit from the hybrid system as you are going too fast - effectively turning the Auris into an automatic 1.8-litre petrol engined car - which is hauling around 140kg worth of dead weight in the form of batteries and electronics.

Subsequently, as we weaved our way home at five in the morning, stopping for fuel revealed an average mileage of 33.6mpg from one tank, a long way off the claimed 70.6mpg. This wasn't helped by several short trips and the majority of our fast motorway journey - but a 2.0-litre diesel, which would be more relaxing and engaging to drive, would have probably averaged around 50mpg with ease.

Back on the road, as the windscreen wipers smeared their way across a grime-covered windscreen, I had another realisation. For £21,675 they could have at least fitted a low washer fluid warning light......

Sat-nav is an expensive extra - we used our own. 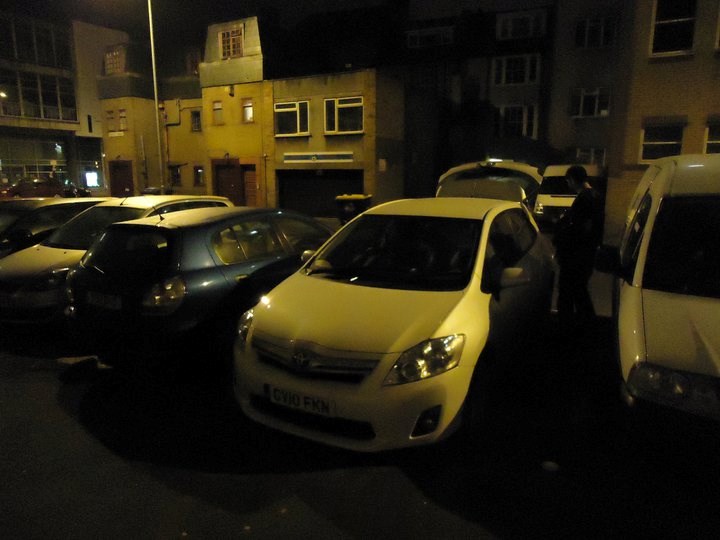 ...even in extremely dark conditions.