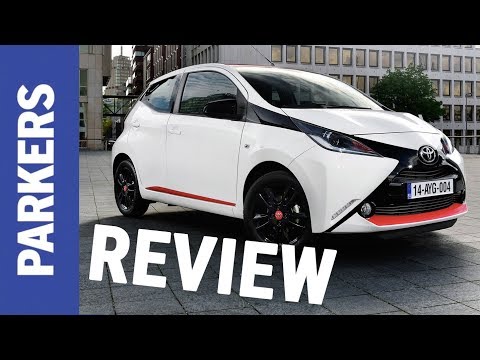 Written by Lawrence Cheung on 12 October 2020

The Toyota Aygo is the smallest car in the Japanese manufacturer's range, sitting below the Yaris supermini. It shares its mechanical underpinnings with the Citroen C1 and Peugeot 108, but comes with a far more distinctive look on the outside, with dramatic X-themed design and plenty of colour options.

The Aygo city car comes in a choice of three- or five-door body styles, but has some stiff competition in the form of the Volkswagen Up, both the Kia Picanto and Hyundai i10 from South Korea, and the now-obsolete Vauxhall Viva, Fiat 500, SEAT Mii, Skoda Citigo and Ford Ka+. The Aygo appeals with its bold exterior styling and suprisingly roomy interior (for such a small car), as well as a nippy drive and scope for personalisation. Read on to see if it's one of the best city cars on sale.

Bold styling and lots of personalisation

Dominating the look of the Toyota Aygo is the contrasting coloured ‘X’ across the nose of the car, leading up towards the side windows. This is part of Toyota’s aim to make the Aygo appeal to a younger clientele as the ‘X’ and various other elements of the car’s exterior and interior design can be customised. Three- and five-door versions of the Aygo are available, and while the full glass tailgate continues, it provides access to a deeper boot than before.

The interior design is shared with the Aygo’s sister cars and represents a significant leap over the older models’ back-to-basics approach, especially when fitted with the 7.0-inch colour ‘X-Touch’ infotainment screen. All the plastics are firm and resilient, but they feel well-assembled and are interestingly-styled.

That X-theme continues with the four Aygo specification grades available: X-Play, X-Trend, JBL Edition and X-Clusiv. This is far simpler than is used to be, when you had a choice of seven trim levels. Standard equipment includes LED daytime running lights, electric front windows, USB and aux-in connections, air-con, Bluetooth and a height-adjustable driver’s seat.

Under the Toyota Aygo’s bonnet is an improved version of the 1.0-litre, three-cylinder petrol motor that the old model was powered by. Producing 72hp and 93Nm of torque, performance is adequate, and fine for city use. Beware, though, that it’ll quickly feel out of depth on motorways – especially when heavily loaded. Yes, it’s not designed for high-speed cruising, but rivals – such as the Volkswagen Up – are more capable.

Combined with the light sub-one tonne body, Toyota claims it will average between 53.2-56.4mpg with the manual gearbox, emitting 114g/km of CO2 in the process. An automatic gearbox, known as X-Shift, is also available.

Updates to the range over its life

Despite only going on sale in 2014, Toyota brought new technology and trim levels to the Aygo barely a year later. Firstly, it offered the X-Wave canvas roof as an option on the five-door X-Pression trim, and then added the X-Pure and updated X-Cite special editions. Finally, the Toyota Safety Sense suite of crash prevention technology seen on other models was added to the Aygo and also the Yaris as an optional extra.

Then, in 2018, a facelift brought a stronger design to the ‘X’ on the front bumper, which featured new integrated daytime running lights. New LED taillights were complemented by a new range of colours and alloy wheel designs for a more modern look. Toyota says performance, handling and comfort were also improved, and we’ve detailed those in the separate review sections.

Tweaks were also made to the three-cylinder engine – making it more frugal – and a restructured trim structure, starting with base X-spec and topping out at the premium X-Clusiv version. So, despite being around for some time now, the Toyota Aygo still looks and feels fresh.

In 2020, the range was reduced to a choice of four models, with X-Play becoming the entry-level model and the introduction of the JBL Edition. The fuel economy and CO2 output figures were also amended to be in line with WLTP.

Click through the next few pages to read everything you need to know about the Toyota Aygo including its practicality, how much it costs to run, what it's like to drive – and whether we recommend buying one.

Volkswagen
Up
4.4 out of 5 4.4
Advertisement
How much is it to insure?