Want to know how much you can fit in the back of a Ford Transit van? Then you’ve come to the right place, as here we have full load area dimensions, capacity and payload details.

Looking for info on the driving experience, interior, engines or trim levels? Then check out our main Ford Transit review page instead.

This generation of Ford Transit – which is not to be confused with the smaller Transit Custom – comes in three body lengths, two roof heights and two wheelbase lengths.

This is not as much variety as some rivals – many of which can also accommodate greater payload, and offer far higher maximum gross vehicle weights. The payload issue was addressed during the 2019 facelift, however, and has now been improved by as much as 80kg.

Regardless, the Transit remains good value, and there are drivetrain options to suit all uses.

Front-wheel drive (FWD), rear-wheel drive (RWD) and all-wheel drive (AWD) are available on all but the largest Ford Transit version (which is RWD only), plus there’s the option of a six-speed automatic gearbox on FWD models following the adoption of the new 2.0-litre EcoBlue engines in 2017. 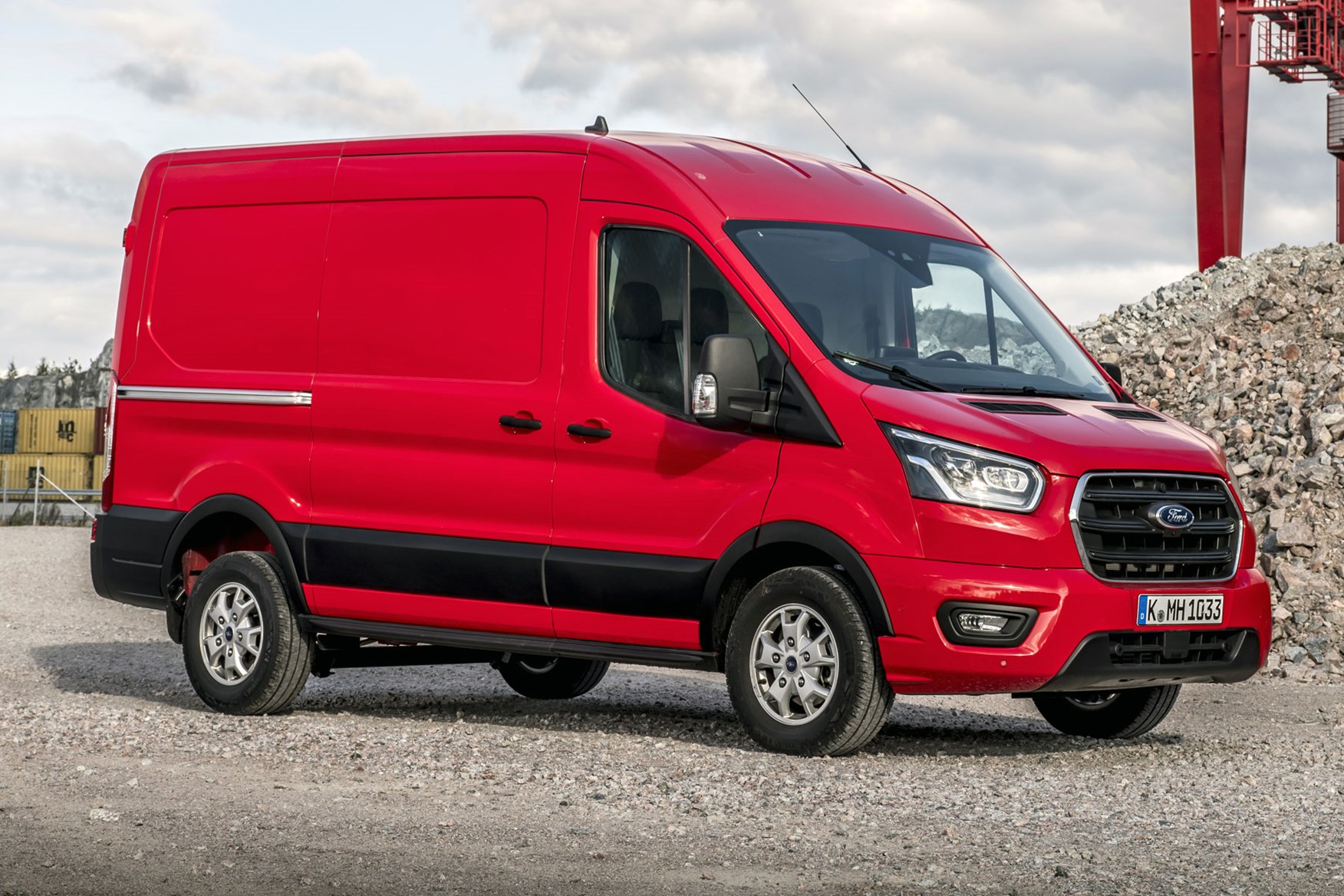 In addition to the basic panel van (above), the Transit also comes as a Double-Cab-in-Van (DCiV), with a second row of seats and space for up to seven people on-board (below). 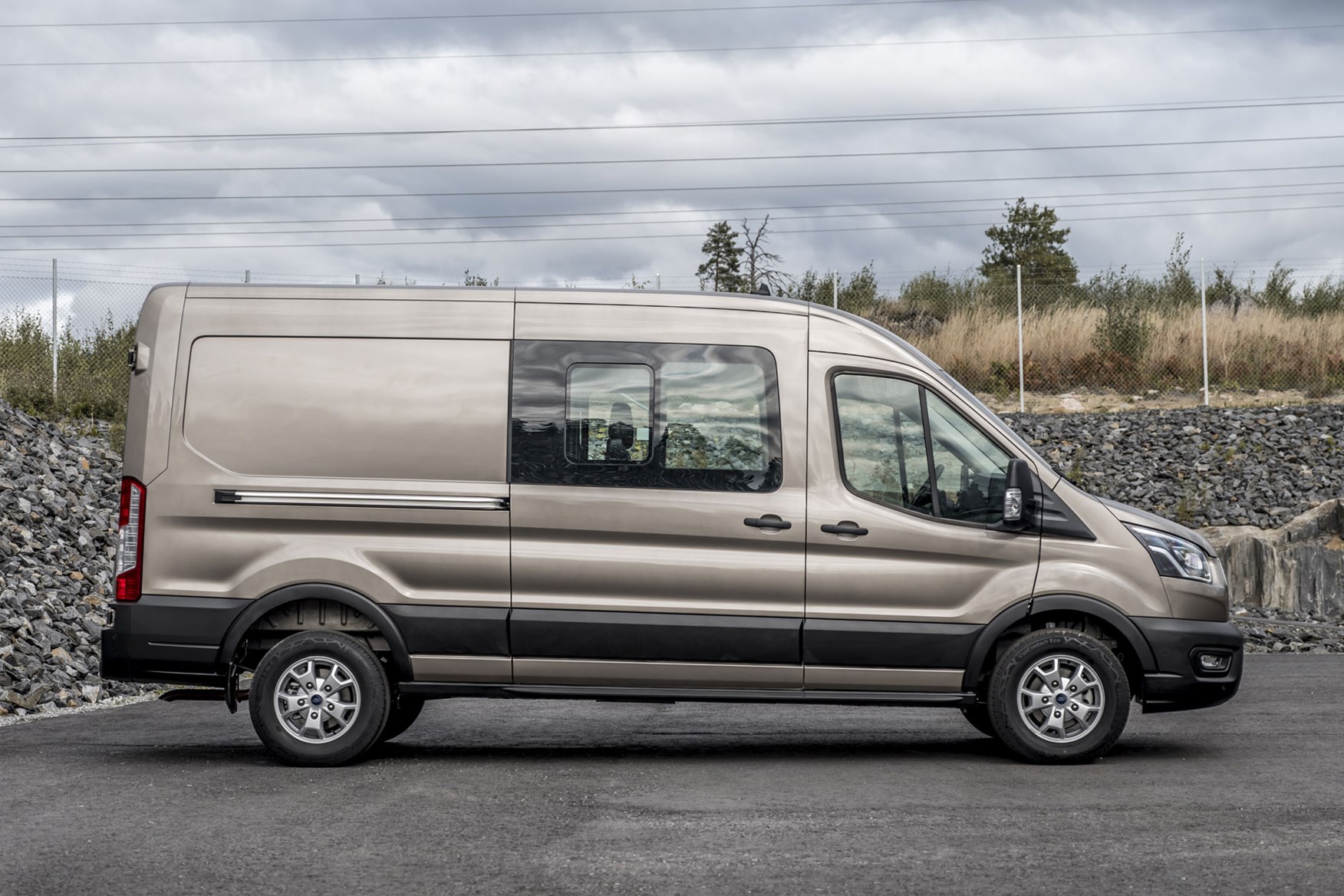 All models – including the DCiV – feature a full bulkhead for safety and security. From the 2019 facelift onwards, this is was made from composite material instead of steel in order to save weight and increase payload.

We're concentrating on the dimensions and load capacity of the standard vans here, but the Transit is also available as a chassis cab.

As such there are numerous conversion options if you need something more specific – we have a review of a Luton body Transit on the main review page – and in July 2018 Ford added a so-called skeletal chassis cab variant as well (below). 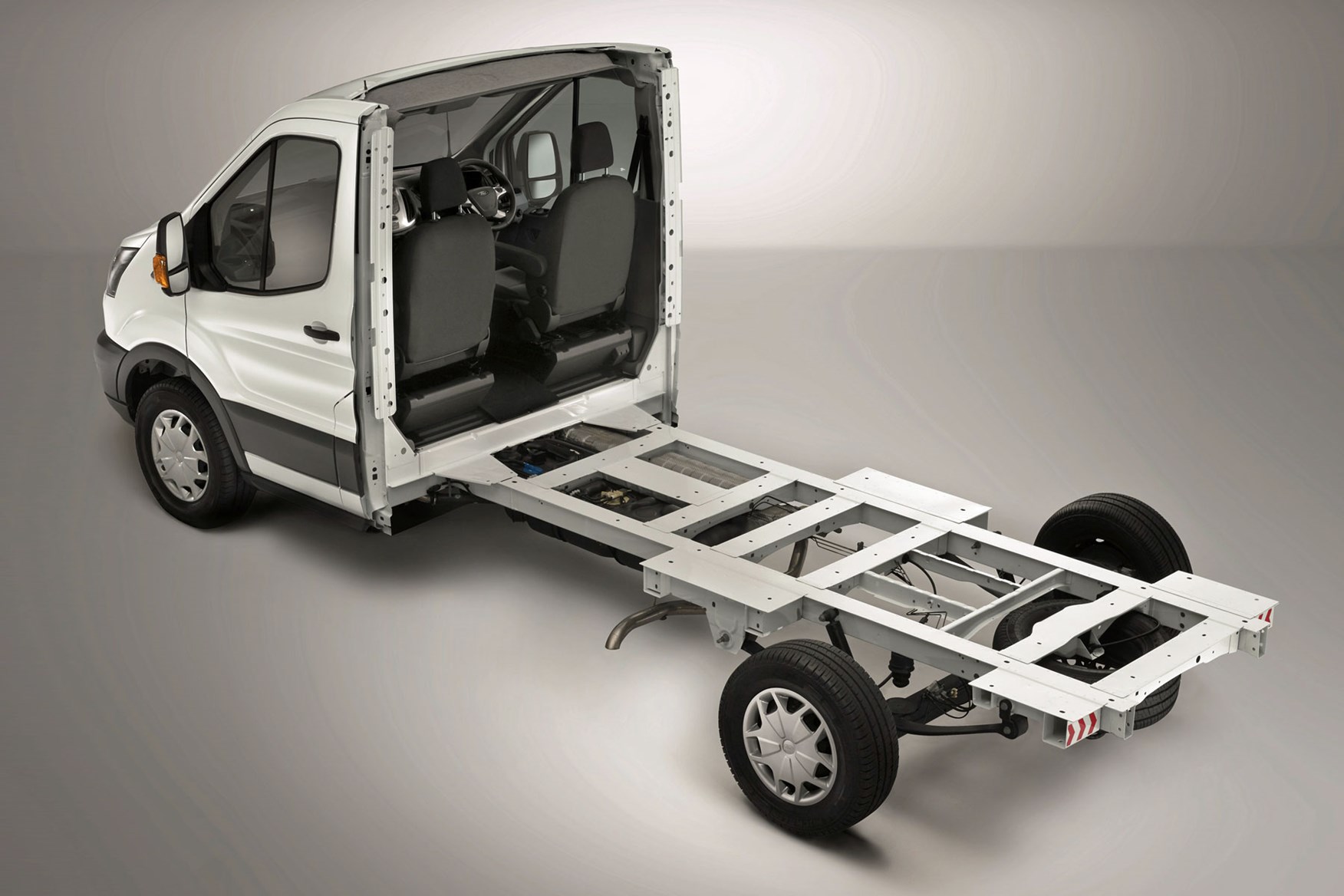 This uses a more minimalist rear structure with an open-backed cab area and comes on the FWD platform only, delivering a 200kg weight saving over the conventional chassis cab and a load floor height that is up to 100mm lower.

Higher-specification Trend variants and above come with an ‘easy clean’ load floor and half-height boarding, but all versions get load lashing points as standard and there is a vast array of official Ford optional extras for added practicality.

These include internal and external roof racks, roof base carriers (supporting up to 150kg), roof access ladders, and a variety of interior load restraint systems including load space dividers, cargo nets and retention packs with side lashing rails.

Both the conventional Ford Transit panel van and the Ford Transit DCiV are available in every body size, though obviously the former has more load space as it has fewer seats.

As is typical for vans these days, Ford has given the bodylengths L numbers and the bodyheights H numbers – though neither of them start at one (which is also pretty standard with large vans, if unkind to those who appreciate neatness and order). 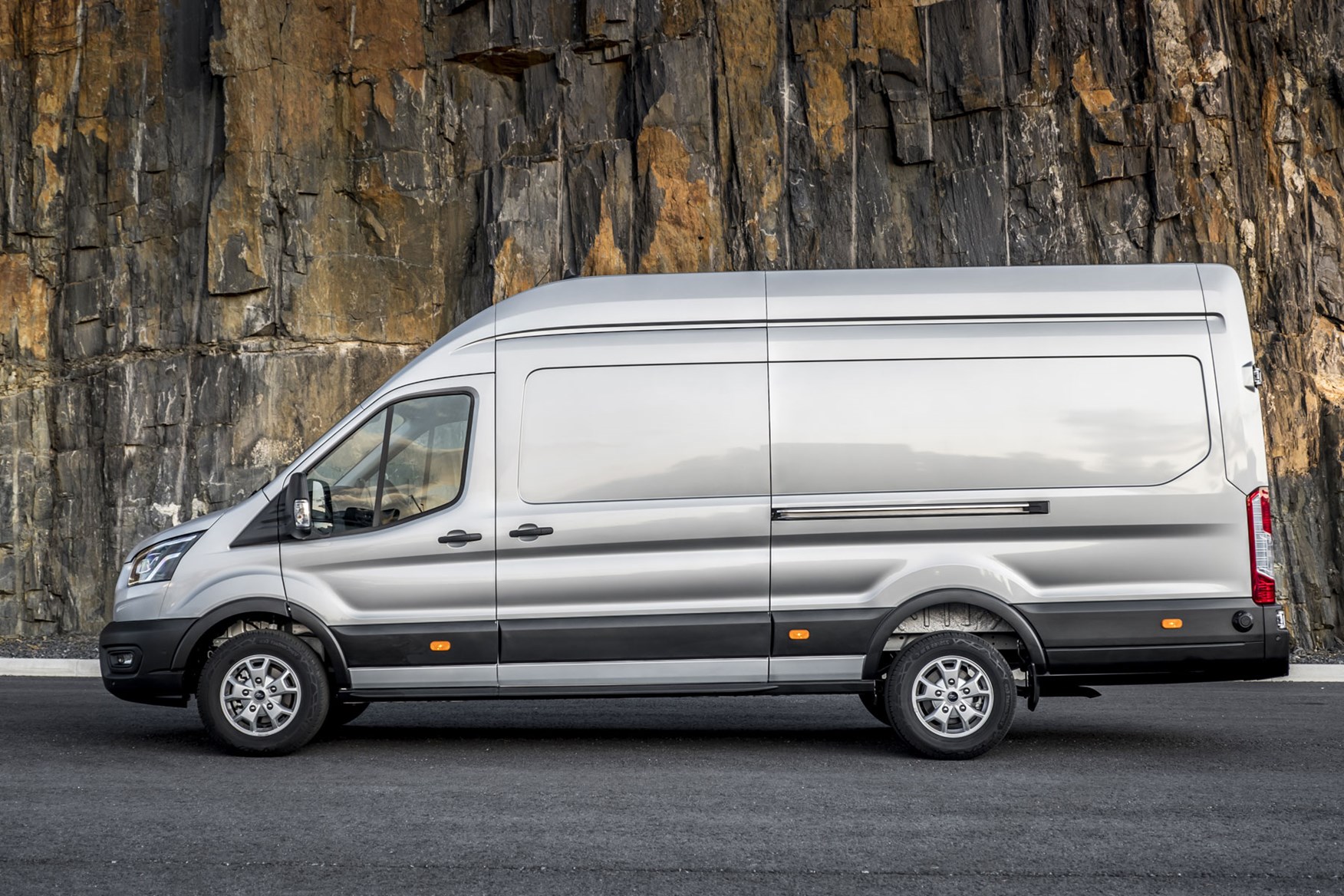 As such, the shortest Transits are L2 models, with a short-wheelbase (the distance between the front and rear axles) to match; the middle length L3 Transits and the longest L4 variants – also known as the EL (for Extra Large) L4 or even Jumbo if you’re old school – share a long-wheelbase.

Ford Transit height options are H2 and H3 – though the amount of load height inside also varies with drivetrain. With no need to make room for a rear differential, FWD models have lower loading floors and therefore greater ultimate capacity..

These are the same for panel van and DCiV models – with the notable exception that the sliding side-door opening on DCiV models is 1,200mm rather than the 1,300mm you get with a panel van.

People are generally smaller than pallets, so that shouldn’t be a significant issue.

Here are the outside dimension for every panel van version of the Ford Transit (updated June 2020):

The height of all Transit van models varies with specific equipment.

With a maximum load capacity of 15.1 cubic metres (cu m) in its biggest L4H3 guise, the Ford Transit falls somewhat short of the largest rivals now.

Check the dimensions for the panel van below to see if it suits your needs: 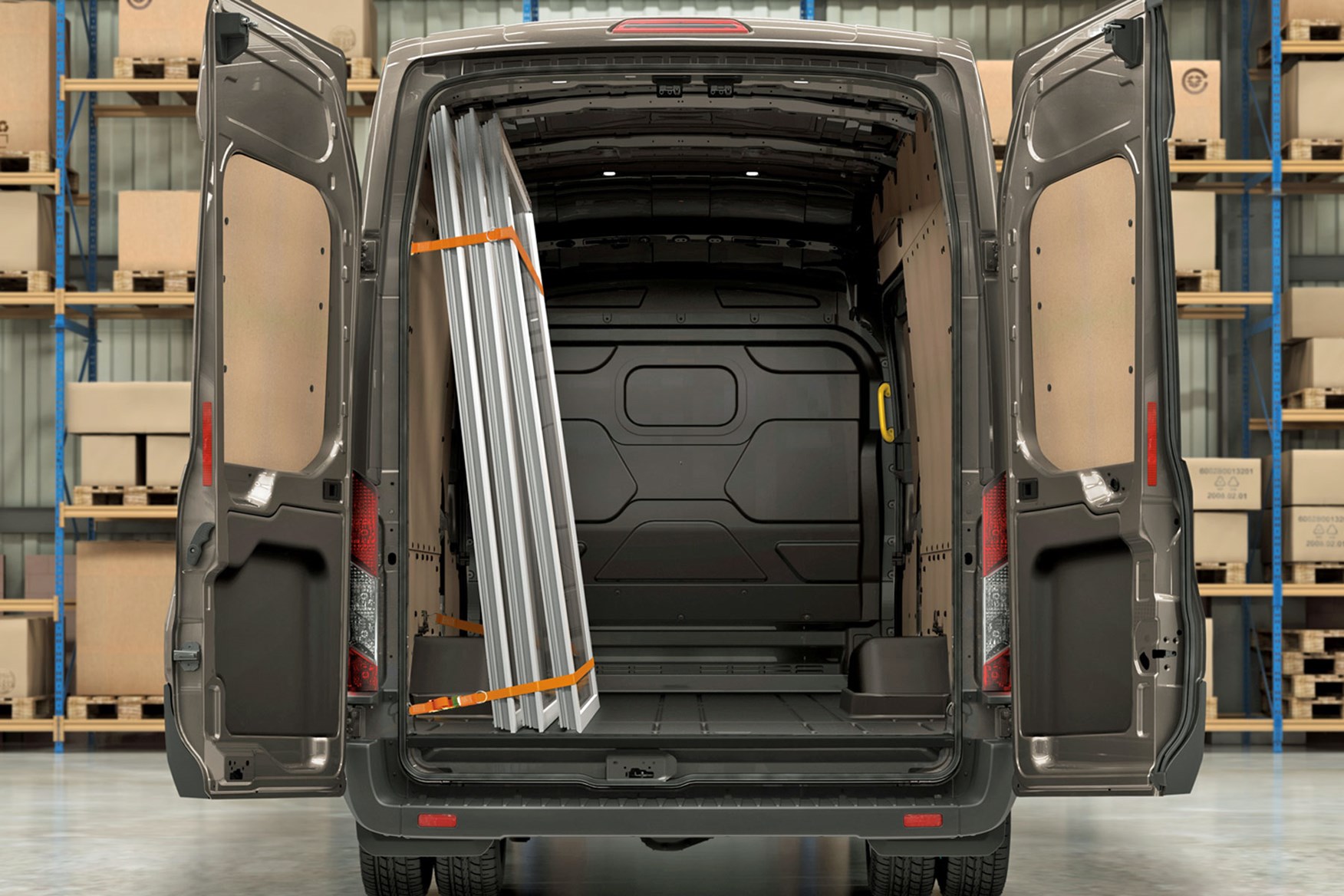 Like the main panel van, the DCiV has a fixed bulkhead for passenger safety. The load dimensions for these are as follows:

This is caused by the increased height of the load floor made necessary by the oily bits needed to deliver power to the rear wheels.

You'll also have to lift items higher to get them in the back for the same reason.

However, the facelifted model has redressed this somewhat with a number of weight saving measures - including an aluminium bonnet, re-designed rear axle and specially manufacturing technique for the wheels - and has seen payload ratings rise by up to 80kg on rear-wheel drive models and 48kg on front-wheel drive models.

GVW options across the 2.0-litre EcoBlue Transit range are:

You cannot legally drive anything above 3.5t GVW on a standard UK car driving licence. 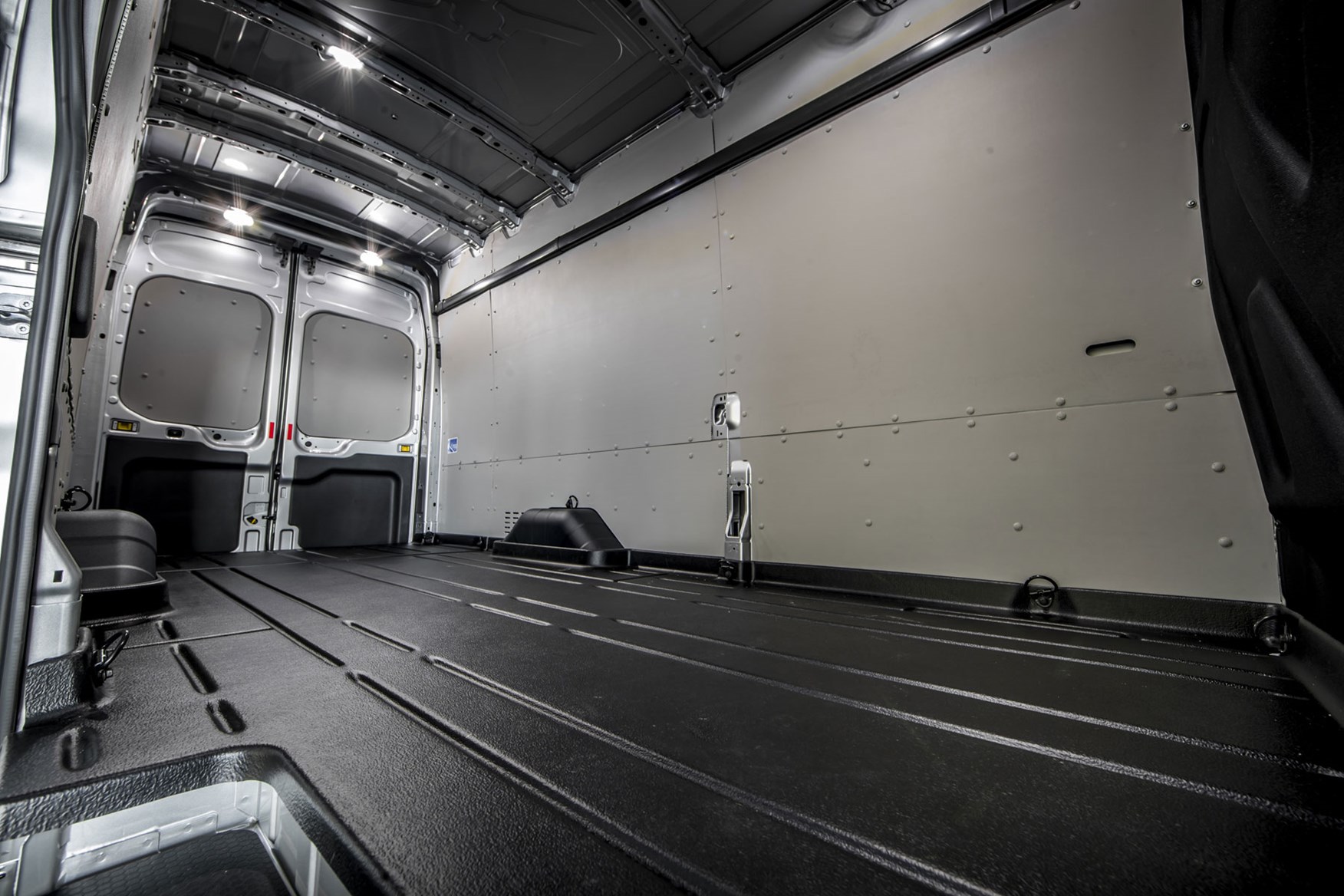 The maximum payload ratings at 3.5 tonnes for each Ford Transit body size are as follows

You can see that Ford has made impressive increases in the payload rating during the 2019 update.

All versions will tow the standard 750kg unbraked, but braked towing ranges from 1,650kg to 3,500kg, so check the weight plate carefully on whatever Transit you’re driving to make sure you stay on the right side of the law.

Ford Transit (2014-on) being loaded by forklift

Ford Transit (2014-on) side view side door open

Ford Transit (2014-on) rear view both doors folded back