The VW Crafter has been in production since 2006 when it replaced the venerable Volkswagen LT.

It’s the product of a joint venture between Volkswagen and Daimler-Chrysler, and is built using many of the same parts as the Mercedes-Benz Sprinter. That said, it is a fair bit cheaper, and the diesel engines and gearboxes are VW’s own. 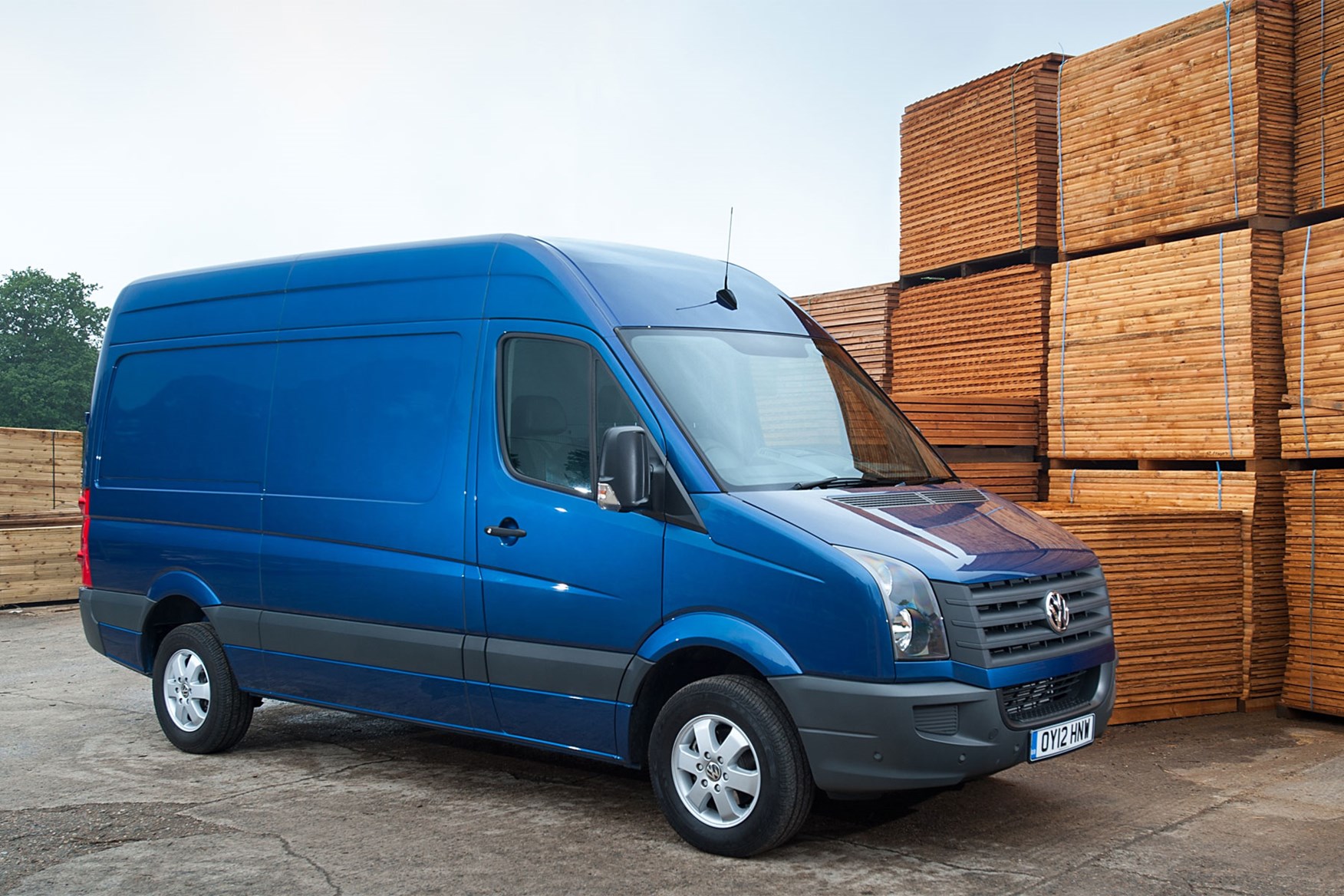 Thanks to a downsize to 2.0-litres for most of the range there’s a refined feel to this updated model, which was sold from 2011 until well into 2017, when it was replaced by an all-new Crafter exclusively designed and built by Volkswagen.

This Crafter also looks more like a VW than its predecessor thanks to a revised face, while interior materials were improved in an effort to boost refinement.

The Crafter, however, offers poor payload due to the heavy chassis.

Similarly, while the option of BlueMotion technology brings improved efficiency, which has allowed VW to make some impressive claims regarding CO2 and fuel economy, this model still falls behind many other large vans.

Does it have what it takes to steal some of the Sprinter’s thunder? Read on to find out…

This generation of Crafter came with two engine sizes.

The backbone of the range is a 2.0-litre diesel engine available in 108bhp, 134hp, 141hp and 161hp derivatives. The first three use one turbocharger, while a pair of turbochargers help the most powerful engine make 400Nm of pulling power, 40Nm up on the most powerful version of older Crafters. 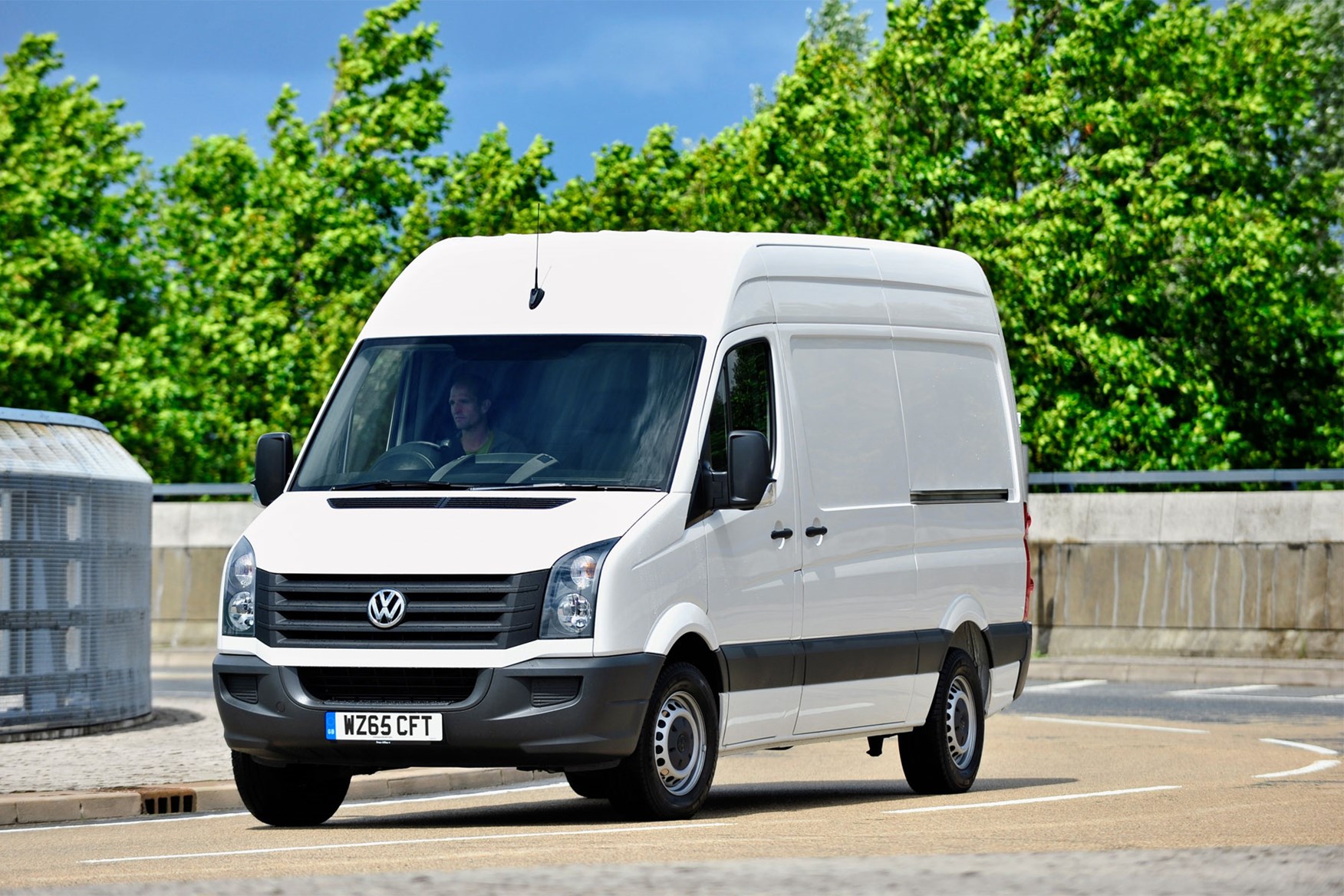 These engines all pass Euro-5 emissions regulations and are lighter than the Crafter’s previous engine, while the firm claims fuel efficiency has gone up by 33% too. They all mate to a rugged six-speed manual gearbox.

The old 2.5-litre engine is still available if you want an automatic Crafter, coupling 134hp with a six-speed ‘Shiftmatic’ transmission.

Handling-wise the Crafter is an accomplished machine. Minimal body-roll and sharp steering mean it feels planted through corners, while a small turning circle (a 30/35 delivery SWB with normal roof turns in 12.3m) helps when manoeuvring through town.

Based on the Mercedes-Benz Sprinter, there is a lot of space in the cabin – arguably slightly more than the Merc. The driving position is comfortable with excellent visibility thanks to the large windscreen. 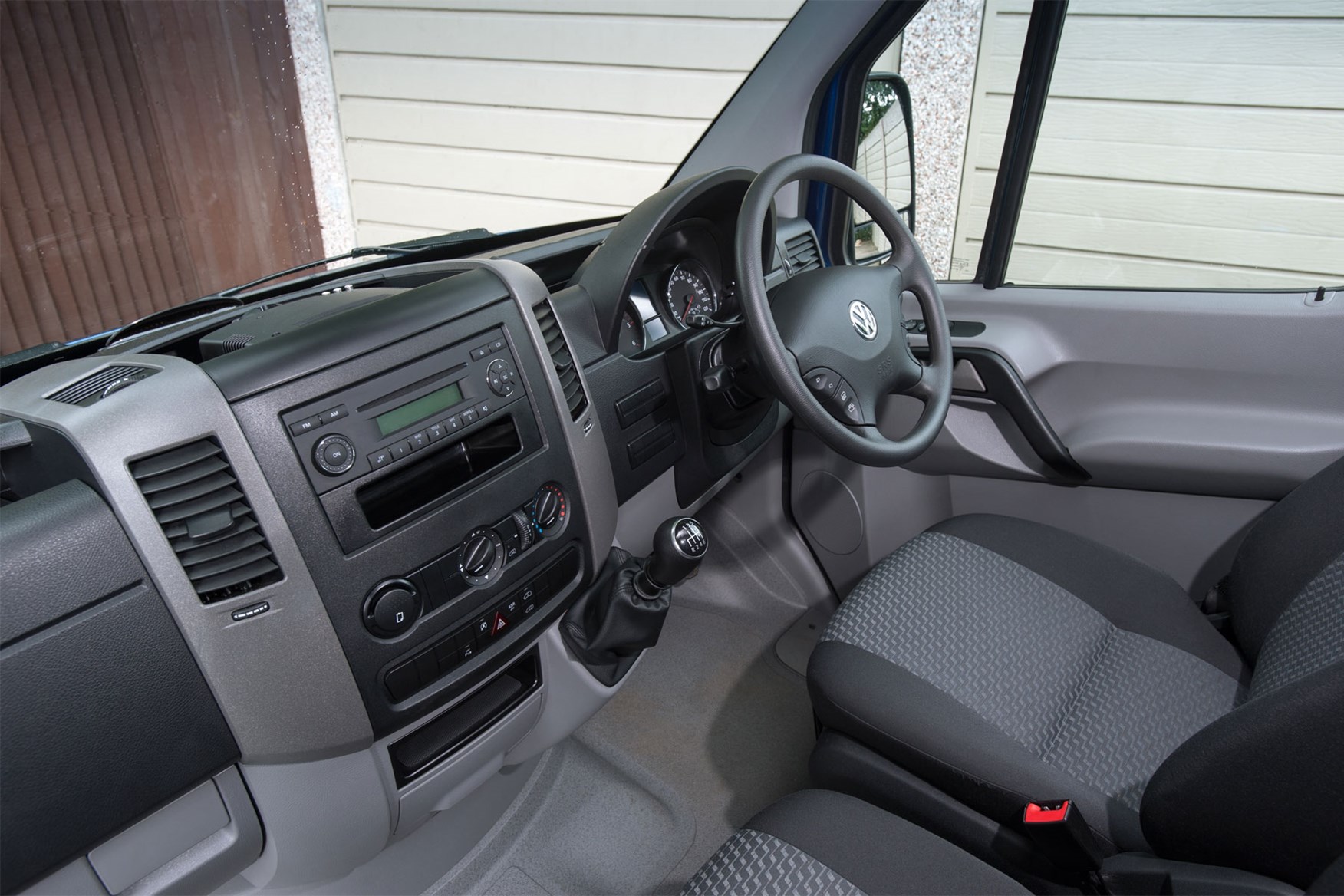 For this 2006 update, the Crafter’s interior was given a makeover, with a new dashboard design and rugged-feeling yet smart materials. There’s a range of optional colours and materials available for the seats, which now get three-stage heating instead of two.

A new white instrument cluster includes the standard ‘gear change recommendation’ display, while there’s also a height-adjustable driver’s seat (and passenger seat in Kombi), storage bins above the windscreen and in the centre of the dashboard, and a standard fixed bulkhead on normal van versions. Electric windows come as standard.

You can specify five levels of entertainment system depending on what you’re after. The entry level system has a CD/MP3 player and as you move on up the hierarchy you can add features such as Bluetooth, sat nav and even a 40GB hard drive to store your music on. 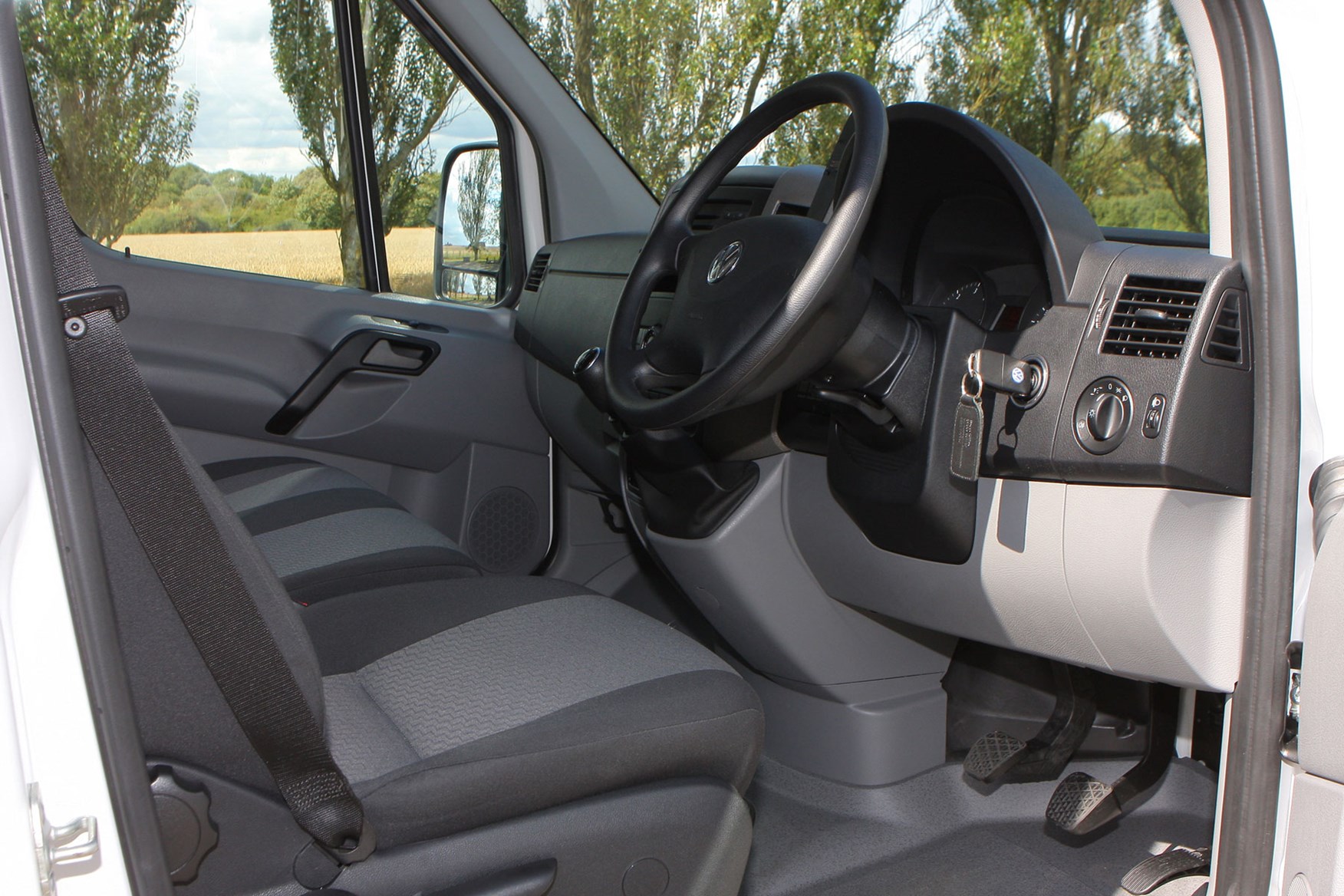 The van version can be specified with a selection of bulkhead options, with either fixed or press-on windows, or a sliding door.

The new diesel engines have improved efficiency, and VW claims this Crafter emits 33% less CO2 than the older model.

Fuel and maintenance costs are nearly 25% lower, while maximum payload has seen a 10% hike.

All of these statistics mean the Crafter costs less to run. You also get a warranty extended into the third year of ownership (or up to 250,000 miles), meaning operators can plan with greater assurance.

VW runs its own large network of van centres where you can go and get servicing carried out by technicians qualified to work specifically on VW products. 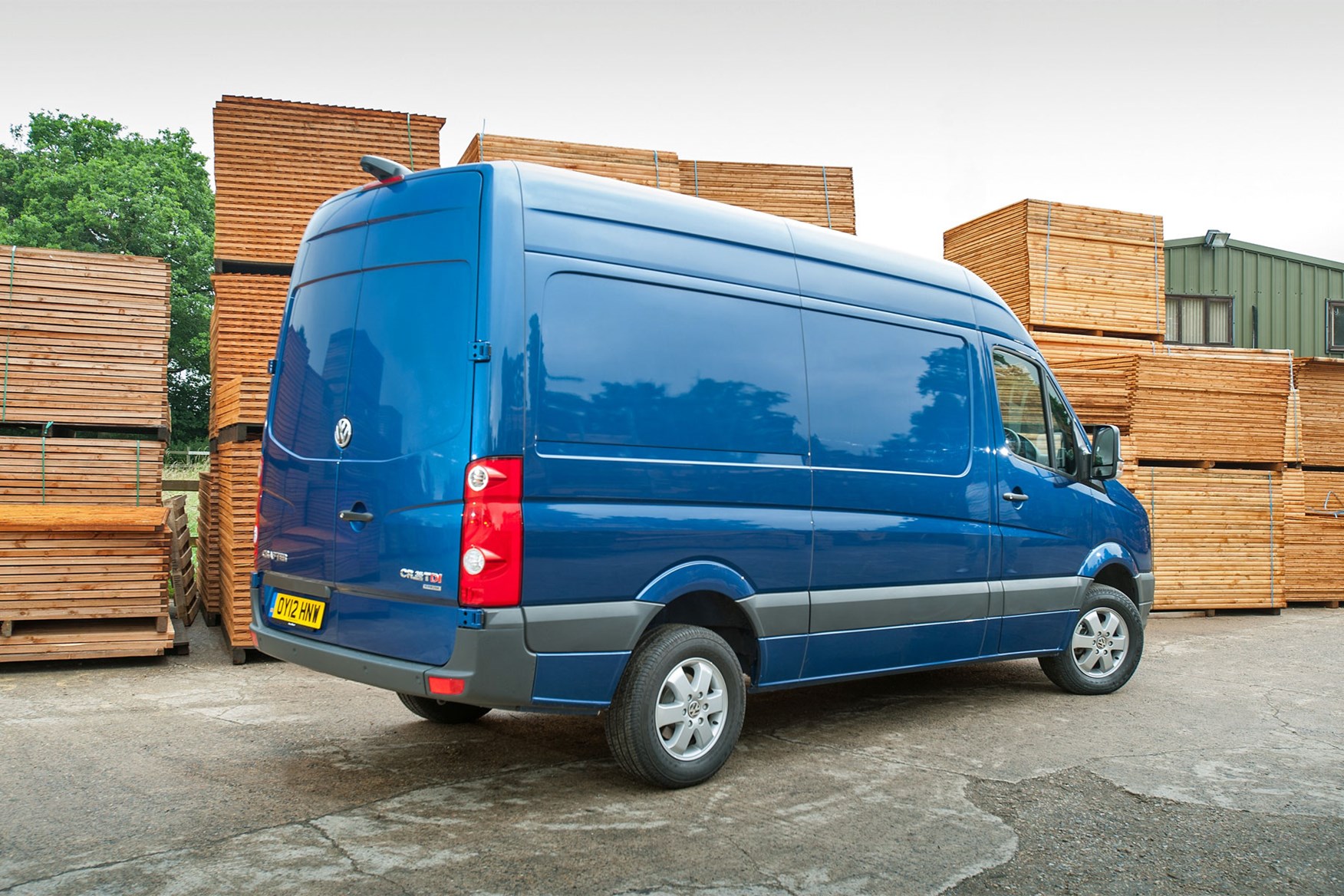 Crucially for those wishing to keep costs down, this Crafter was available with optional BlueMotion technology. This helps the van achieve better fuel economy and lower CO2 emissions, and consists of stop/start, a long final drive ratio axle, cruise control, a visual gear change recommendation system and battery regeneration.

As an example, it’s possible to have the 161hp engine and BlueMotion technology, equating to CO2 emissions of 197g/km. It’ll also return 38mpg on the combined cycle.

The VW brand has been synonymous with reliability for years. Even the LT, which the previous Crafter replaced, was known as a reliable workhorse. There haven’t been any significant recalls over recent years.

Offering further peace of mind, in May 2018 VW introduced an MOT insurance scheme for vans up to 10 years' old.

You get anti-lock brakes and an electronic stability programme as standard, along with ASR (anti-slip regulation), EDS (electronic differential lock system) and ‘braking assistant’.

You also get a driver’s side airbag, a warning tone for an unfastened driver’s seat belt, and lamp failure monitoring thrown in.