Is the Volkswagen Golf Plus any good?

Fitting in between the standard Golf and the Touran, the Volkswagen Golf Plus was an ideal choice for small families who need extra space and practicality, but in a car no longer than an ordinary hatchback. Like the Golf, it was well built, good to drive and available with some impressively economical engines. Strictly speaking, this was a facelift of the first-generation Golf Plus, which you can read about at the bottom of the page.

Styling was revised to look like the Golf Mk6 (2009-2013) and give a sharper appearance. Inside there was increased space and a more sophisticated cabin. There were a few exterior changes – the 2009 Golf Plus had as lower profile, fully colour-coded and redesigned bumpers and revised rear lights with LED technology.

The Plus doesn't command as high resale values as the standard hatchback, which is good from a value-for-money sense as you get more car for your money – but still those same qualities that people appreciate in the Golf.

You get a raised driving position, a good view out and excellent quality switches and controls. Features such as the steering wheel and air conditioning controls mirrored that of the equivalent Golf hatchback. The materials used were high quality, as is the finish. There was also plenty of adjustment in the steering column and driver's seats, so finding the ideal driving position is simple.

Thanks to its tall body, the Volkwagen Golf Plus comfort levels were good. It offered impressive room for passengers, especially those in the back. Plenty of leg and headroom and the rear seats are raised up, making access easier - especially useful when fitting child seats. To help further, the angle of the backrests can also be adjusted in multiple settings.

It can be a bit of a squeeze with three in the back though as there's only limited foot space for the middle seat occupant. On the plus side there's little wind or tyre noise, even at motorway speeds and all the engines are quiet on the move. The refined ride is ideal for motorways and the Golf Plus makes a good long distance family car, helped by comfortable seats. 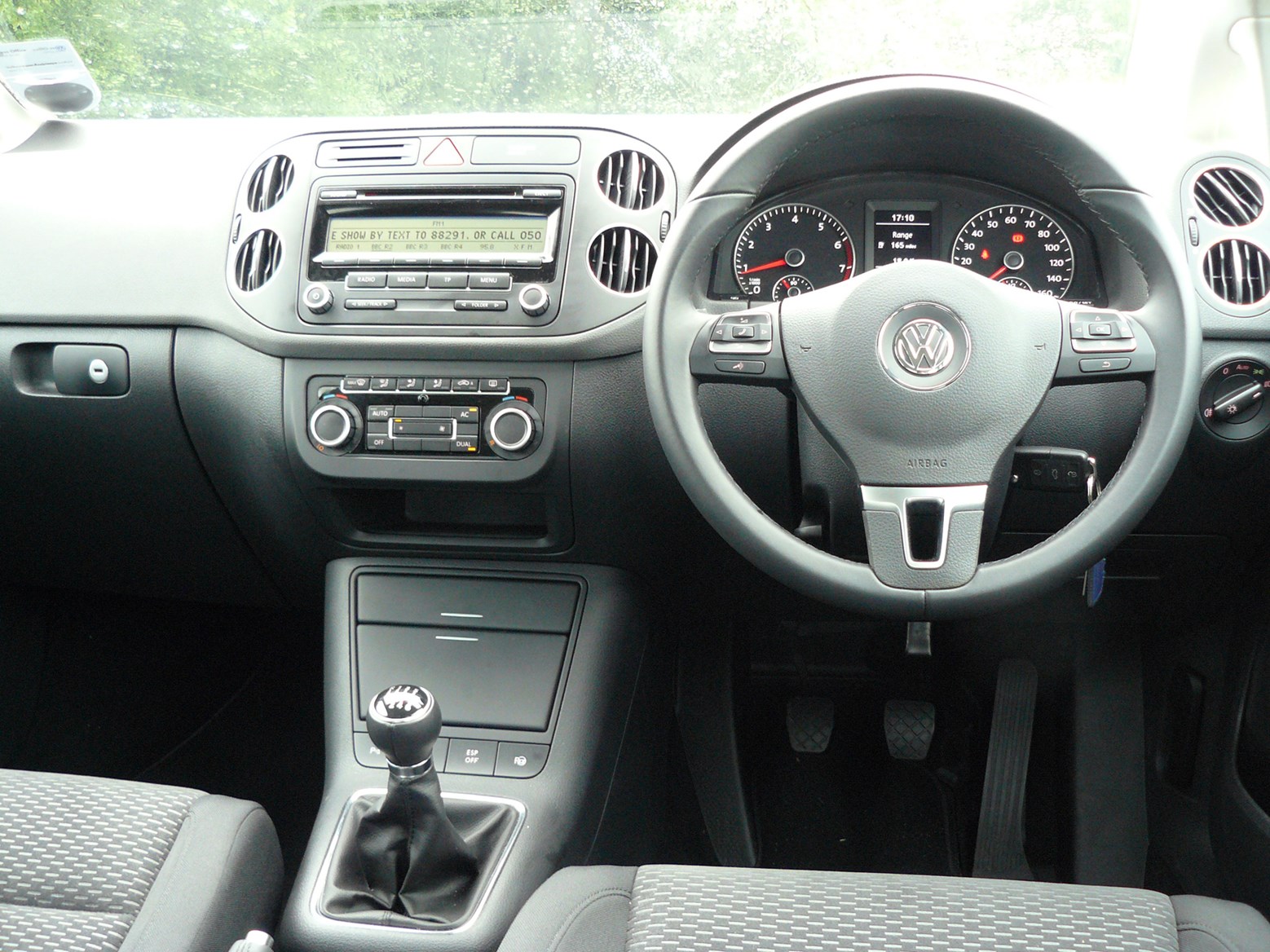 Although it's barely any longer than a Golf hatchback, the Plus boasts a significantly larger boot with almost 400 litres of luggage room compared to 350 litres. SE models also come with a variable boot floor that has two different heights. The lower position provides an extra 120 litres of carrying capacity while the higher position creates a level load area, helped by rear seats which fold down flat.

The rear seats individually slide forward and back to vary the amount of passenger or boot space. The higher-specification model also comes with Park Assist - the first time it's been standard on any Volkswagen. This clever system uses sensors to plot the ideal manoeuvring path into a parallel space. The driver only has to use the accelerator and brake while the car steers itself. The Golf Plus was available with two petrol and four diesel engines. The entry level model was the 1.4-litre petrol, which develops a modest 80hp and as a result can struggle for pace, especially with a full load. It's adequate around town though and averages 43mpg.

There's a second 1.4-litre engine which is a TSI and uses a turbocharger to boost power to 125hp. It's an impressively quick and eager engine that accelerates well from low revs and feels very nippy, 0-62mph taking just 10.2 seconds. It's economical too, averaging 44mpg.

Three TDI engines  mean plenty of choice on this score, and most examples on sales are diesels. The 1.6 TDI comes with either 90hp or 105bhp. The lower power version offers decent pace, but it's the economy which is most impressive, with an average of 60mpg achievable. The 105hp version feels noticeably quicker and the 0-62mph sprint comes come from 13.5 seconds to 12.5 seconds. It also has more low down pulling power, which makes for easier overtaking. 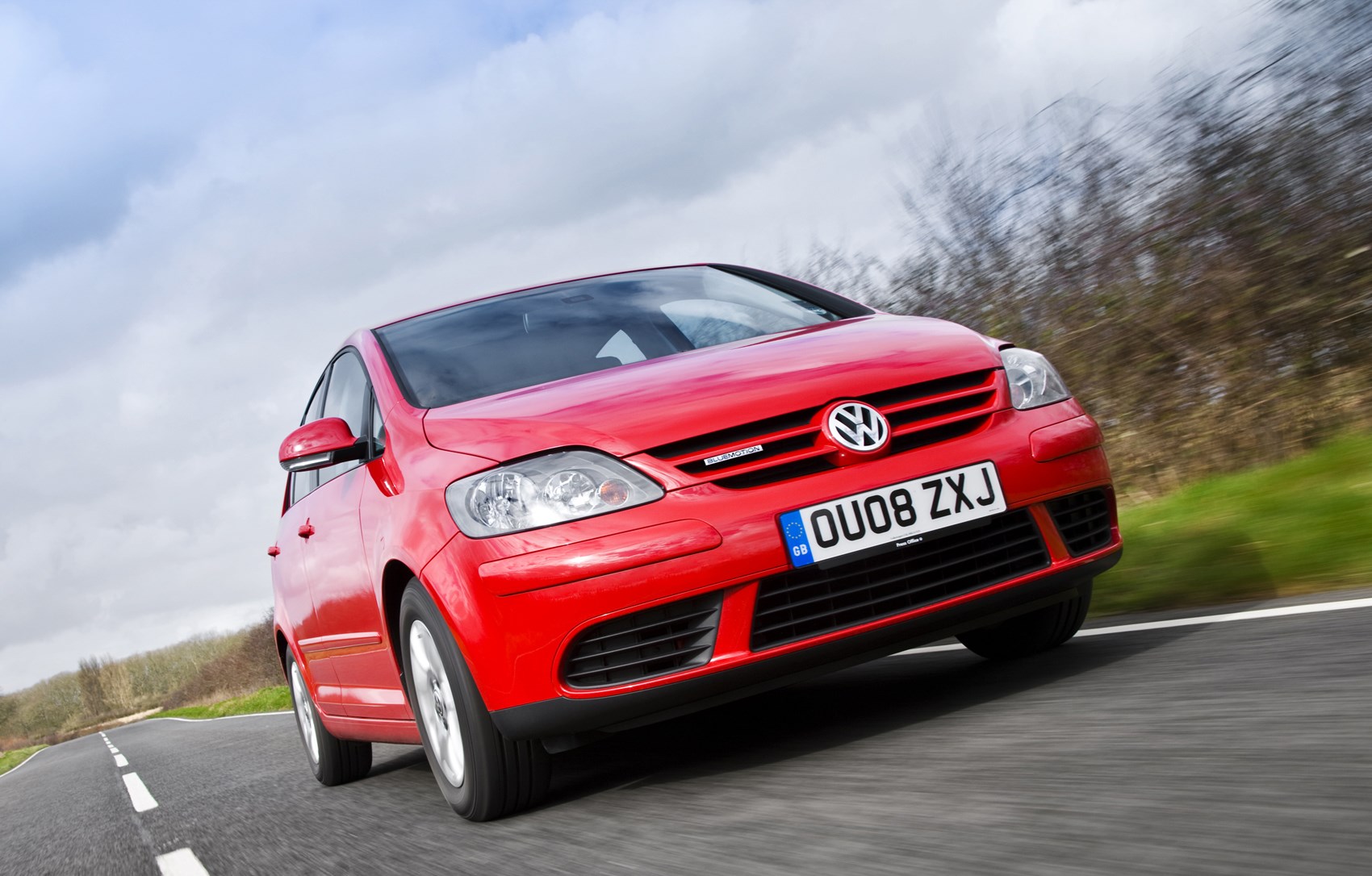 Volkswagen Golf Plus performance is unlikely to be at the top of buyers' priorities but the top engine is the 2.0 TDI with 140hp which is punchy yet smooth and will accelerate from 0-62mph in 9.8 seconds. It pulls very strongly from low revs and is ideal if you regularly have to carry a full complement of passengers and luggage. It's economical too with an average of 55mpg.

In October 2009 a BlueMotion version was introduced which uses the 1.6-litre TDI engine with 105bhp. Thanks to revised gear ratios, low rolling resistance tyres and an engine start/stop function, this frugal unit averages an impressive 66mpg while CO2 emissions of 114g/km make it cheap to tax.

Volkswagen Golf Plus safety levels are high right across the range and all models come with twin front airbags, side airbags and a curtain airbag system for all occupants.

There are also active head restraints to protect against whiplash injuries along with Isofix child seat mounting points in the two outer rear seats. 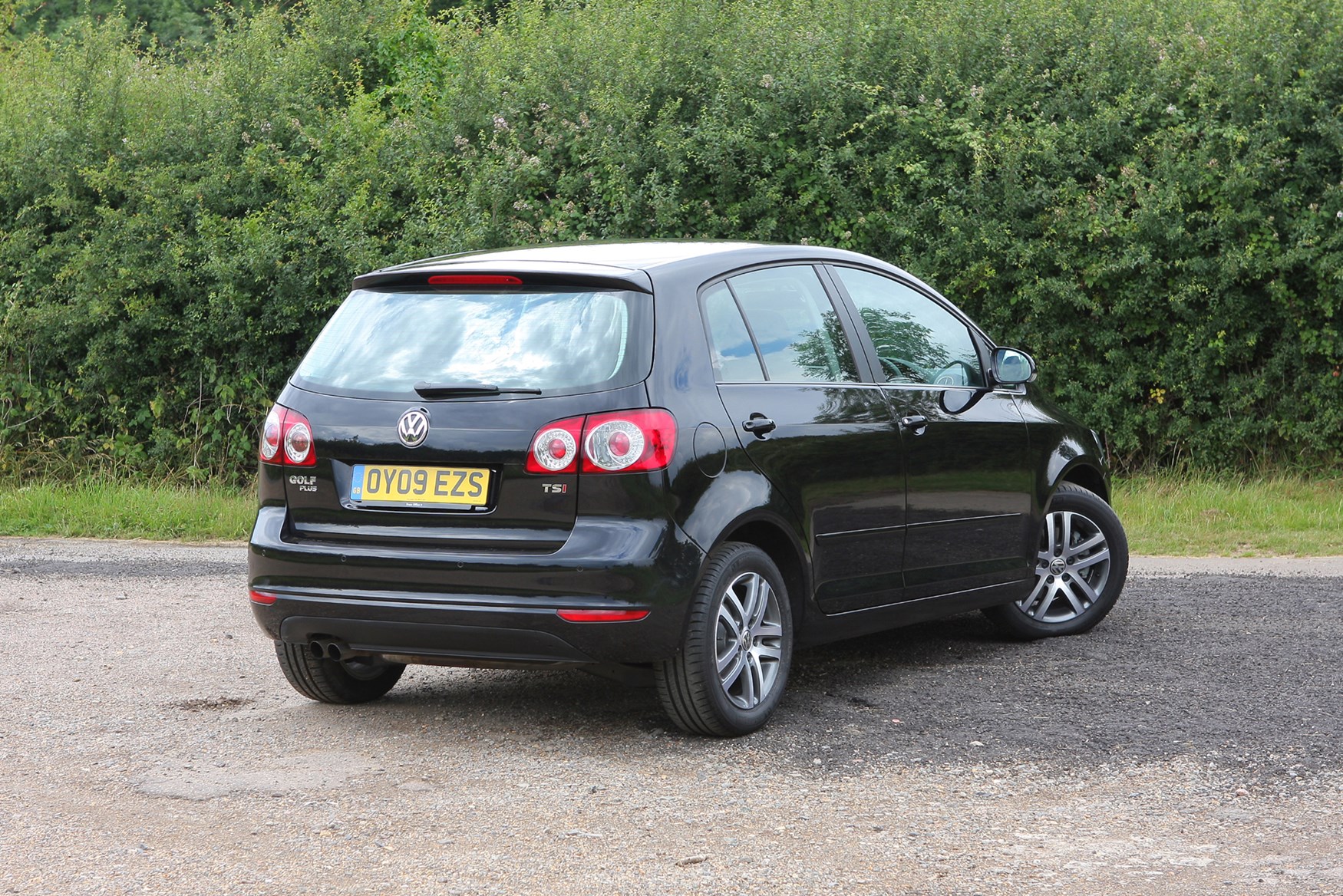 Volkswagen Golf Plus models were all powered by efficient engines and all were capable of more than 40mpg - the best choice for running costs is the 1.6 TDI BlueMotion which averages 60mpg+ when driven gently. Servicing and parts aren't particularly cheap at Volkswagen dealers but there's a wide range of specialists who will be able to help.

All the engines in the range are frugal and as a result CO2 emissions are pretty low. The 1.6 TDI models emit 125g/km of CO2 and can return 60mpg while even the more powerful 2.0 TDI 140 only emits 135g/km of CO2 and averages 55mpg. The Bluemotion models are the best though with economy of 66mpg and emissions of just 114g/km of CO2.

Clearly, this should be attractive to buyers who don’t need the seven-seater Touran, but need that little bit of extra storage space, not available in the standard Golf. There’s more stowage areas and loadspace, more leg room for all occupants and because the rears seats can be shifted lengthways by 160mm and folded via a new system Golf Plus owners get much more flexibility. 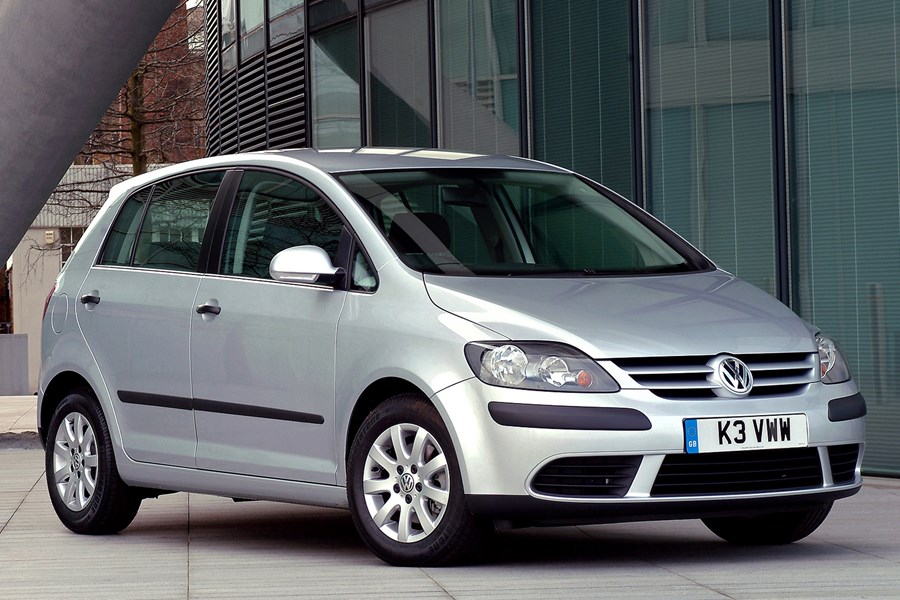 The original Golf Plus sat between the standard Golf hatchback and the Touran MPV in the Volkswagen range, making it ideal for those who wanted a more useful alternative to a standard hatchback.

It never proved as popular as the normal Golf, but this is good news when buying used as prices tend to be lower across the board. It's as good to drive and has plenty of boot space while long distance comfort is impressive. There's a decent choice of engines too, including some frugal diesels along with a low-emissions Bluemotion version.

The Golf Plus was similar to any other Golf Mk5 when sat behind the wheel, with the exception of a slightly better view for occupants and different airvents. The instruments were clear and laid out logically, while thanks to a wide range of seat and steering adjustment, most drivers should have no trouble getting comfortable. The build quality is excellent, as is the finish, but it's not the most interestingly styled interior.

The Golf Plus will seat four adults more comfortably than five, but should be fine for carrying a small family. Much of the extra height over the standard Golf has been taken up by raising the seats, allowing more comfortable access to the car, while rear leg room is also better. The Golf Plus rides comfortably and smoothly over most road surfaces, although there can be wind noise at motorway speeds, however engine noise is minimal thanks to good sound insulation. 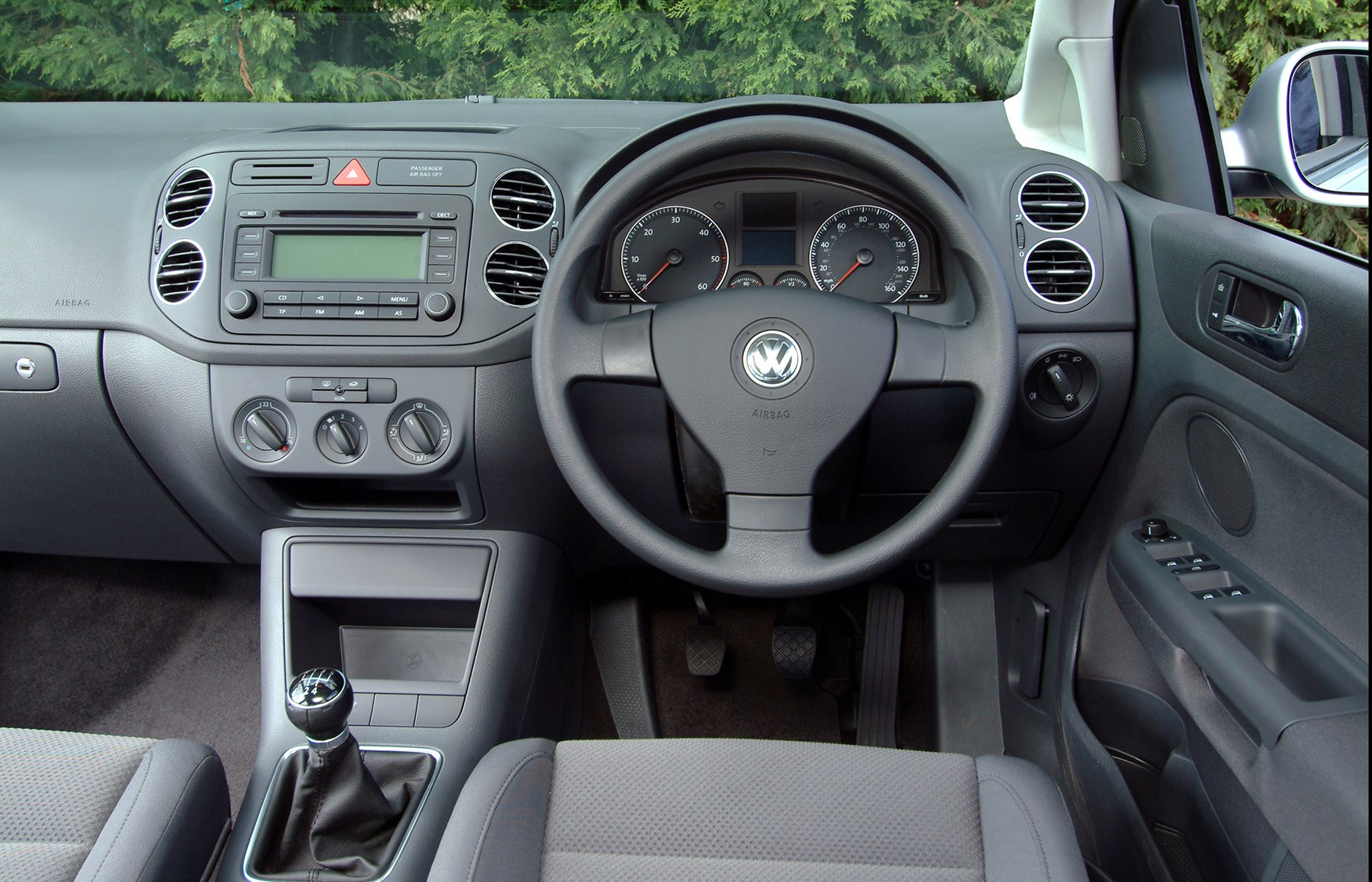 Most models (with the exception of the S) have a variable boot floor which adds an extra 120 litres to 395 litres of luggage space with the rear seats in place. This 515-litre total is very impressive compared to a standard Golf and means the Golf Plus offers more load space than a Ford Focus estate. The rear bench seat is split 60/40 and both parts can slide forwards and back to vary the amount of passenger room or luggage capacity.

And depending on which version you opt for, there are 43 cabin storage spaces including a large central box between the front seats and large door pockets too. With just 75hp, the entry-level 1.4-litre works hard and although it was upgraded in mid-2006 to 80bhp, 0-62mph still takes a leisurely 14.9 seconds. The 1.4 FSI with 90hp is better but you really need to go for the 1.6 FSI with 115hp for adequate motorway performance. The top petrol engine is the 2.0-litre FSI with 150hp, which offers good pace but isn't very frugal, averaging just 33mpg.

The diesels are more popular in the range with the entry-level choice the well-proven 1.9-litre TDI. It pulls very well considering its modest power figures of either 90hp or 105hp and is very economical too, returning more than 50mpg. In 2008 the Bluemotion was launched that also uses this engine, but thanks to longer gear ratios and engine tweaks it averages 58mpg. The other diesel is a 2.0-litre TDI with 140hp that offers strong low down pulling power and returns 48mpg. At the end of 2007 the 1.6-litre FSI option was replaced by a 1.4-litre TSI unit which uses a turbocharger to produce 122bhp and a 0-62mph time of 10.2 seconds. It's a very enjoyable and responsive engine to drive giving the Golf Plus a sporty feel.

The Golf Plus shares the same safe handling of the standard Golf and feels similar to drive as you might expect. The steering is nicely weighted and offers decent feel, while body roll is well controlled in corners. The ride is smooth too and it means the Golf Plus is a good long distance car - especially the diesel models. Sport and GT models have lower suspension which mean they are noticeably firmer over bumps and rough road surfaces.

The Golf Plus is no more expensive to run than a standard Golf. All the engines offer reasonable costs although we'd steer clear of the 2.0-litre FSI and go for a 1.9-litre TDI if you want to maximise fuel economy.  Volkswagen servicing isn't the cheapest around though, so stick to specialists if you're on a budget.

The Bluemotion version is the one to go for if you want to get the best MPG. It's powered by the 1.9-litre TDI diesel with 105hp but tweaks to the engine along with longer gear ratios and weight saving measures mean it emits 127g/km of CO2 and returns 58mpg.