Buying used brings almost unlimited choices if you're looking to buy one of many Volvo S90 cars for sale. You can click the links below to search through a wide range of cars for sale across the UK. As well as that, you can use our search tools to tailor your results based on price, location, engine and trim – depending on your own personal preferences. With Parkers, you'll be able to find the right used car at the right price for you.

Want all the benefits of a new car but at a significant cost saving in cash terms? Buying a nearly-new car generally brings you the remainder of the manufacturer's warranty, full main dealer support, and a used car with low miles on it. To search for nearly new Volvo S90 cars for sale on Parkers, click on the links below. You will find the best cars for sale near you, and by using our search tools, you can narrow your choice, and find the perfect Volvo S90 at the right price.

Stylish saloon is packed with advanced safety kit and technology

Read review
Leasing
If owning the vehicle isn’t too important to you, you might want to consider leasing as an alternative to purchasing a car outright. You can search over 32 Volvo S90 lease deals available from just £616 per month at Parkers with national delivery available.
View Volvo S90 LEASE deals
More

Sitting near the top of Volvo's line-up is the S90, the Swedish brand's largest saloon. Not only does it do battle with a selection of competitive German executive saloons, there's also a more practical estate version available called the V90.

Available with petrol, diesel and plug-in hybrid power, as with all Volvos the S90 puts a great deal of emphasis on safety and favours a comfortable, relaxing driving experience over sporty performance. These factors are effective in making the Volvo feel genuinely different to rivals such as the Audi A6, BMW's 5 Series, the Lexus ES, Jaguar's XF and the Mercedes-Benz E-Class.

The Volvo S90 is sold only as a classic four-door saloon car – though the V90 is essentially the same vehicle in the form of an estate, and the XC90 is the equivalent SUV.

There’s a choice of three trim levels, all of which are well-equipped and cover a broad range of needs and tastes. Entry point is Momentum Plus, which has everything a typical company car driver is likely to need, while R-Design Plus is the sporty one (at least in terms of styling), with big wheels, more aggressive bodywork and sculpted seats. Meanwhile, Inscription Pluspiles on the luxury, with additional chrome, lots of leather and comfort seats.

Engine choice is similarly sparse but effective. Petrol options are the 190hp T4 and the 250hp T5, mirrored by the 190hp D4 and 235hp D5 diesel options – the latter fitted with all-wheel drive.

All are mere 2.0-litre four-cylinder units, combined as standard with an eight-speed automatic gearbox. 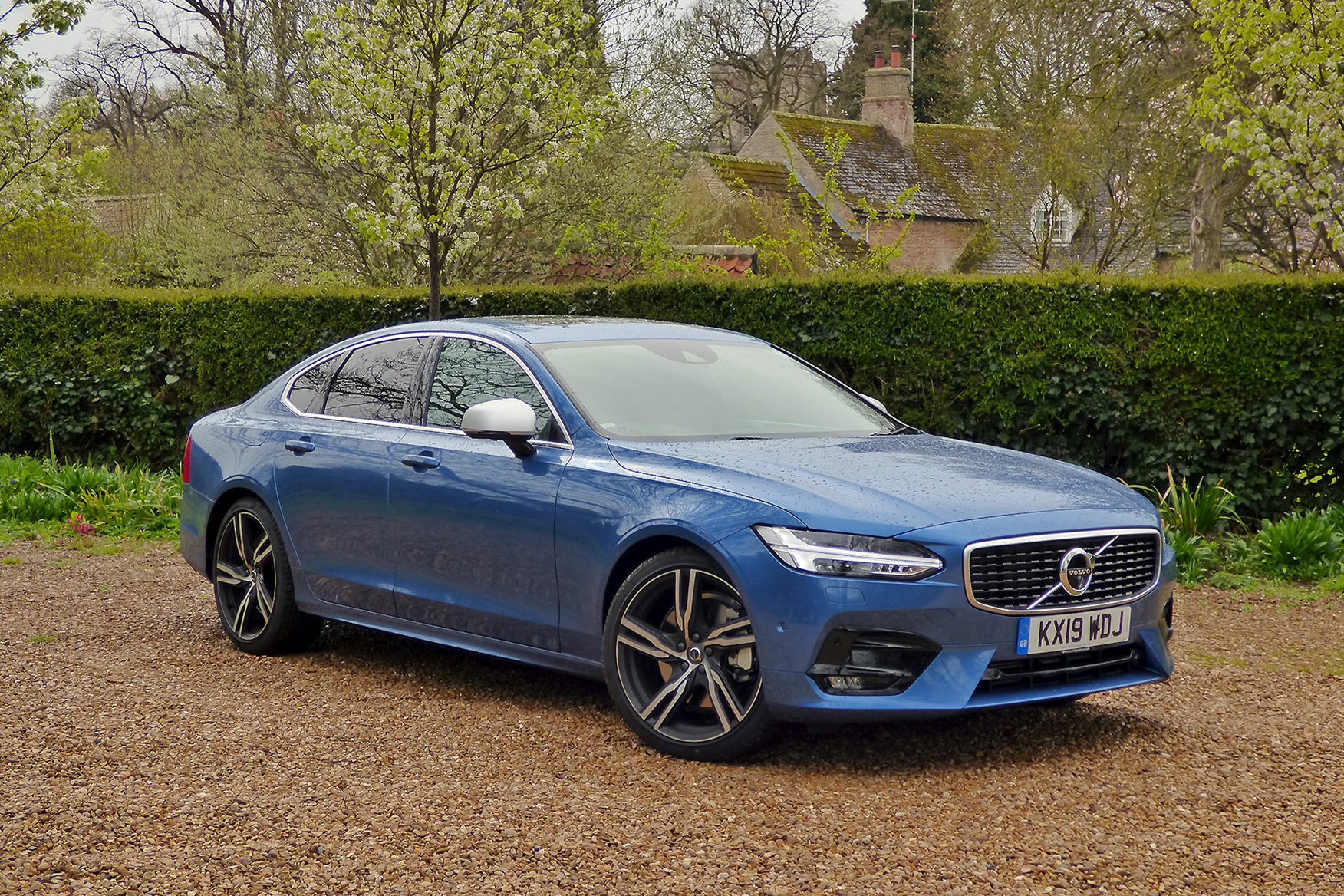 At the top of the range sits the S90 T8 Twin Engine hybrid – which you can read more about below.

The T8 Twin Engine, to give its full title, is a plug-in hybrid electric vehicle sitting at the top of the line-up.

It’s called the Twin Engine because a) it sounds fancy, and b) this Volvo gets a 2.0-litre petrol engine driving the front wheels and an electric motor powering the rears.

This results in a stonking 407hp combined, which is enough for the absurd contrast of 0-62mph in 5.1 seconds and claimed maximum fuel economy as high as 117.7mpg.

While the performance is entirely convincing, to achieve anywhere near that efficiency figure you’ll have to make maximum use of the electric-only driving range, which is officially in the region of 29 miles (it varies with exact spec).

This will mean plugging in the T8 to charge whenever the opportunity is available, which may be too much of a faff for some buyers. In reality, it's most effective just driving around town for short journeys.

Since the introduction of the XC90, Volvo has swiftly developed a distinctive Scandinavian design philosophy that has a sophisticated and individual appeal.

We particularly like the ‘Thor’s hammer’ LED daytime running lights.

On the inside this translates into a minimalist but high quality experience, dominated by some interesting detailing and a large central touchscreen powered by the Volvo Sensus infotainment system. If you don’t like touchscreen air-conditioning controls, this won’t be for you. But Volvo has been making sensible evolutions of this over time, and each one makes it easier to use.

The S90 is also very comfortable, with excellent seats and a vast amount of safety equipment.

Contrary to its German rivals, the S90 is all about comfort – so if you were wanting a sporty executive saloon, you’re best to look elsewhere.

We, however, thoroughly respect Volvo’s decision here, and appreciate that it gives buyers an alternative option.

And besides, you shouldn’t mistake this for meaning the S90 is a barge – body control in the corners is still good, and it covers ground perfectly quickly.

It simply doesn’t feel as precise or engaging as, say, a BMW 5 Series, but the majority of drivers will revel in its supreme comfort and relaxed feel.

To clarify, this means it is usually significantly cheaper to finance one of these than any of the German rivals.

Want to find out what other buyers think? Read our comprehensive Volvo S90 owner’s reviews. 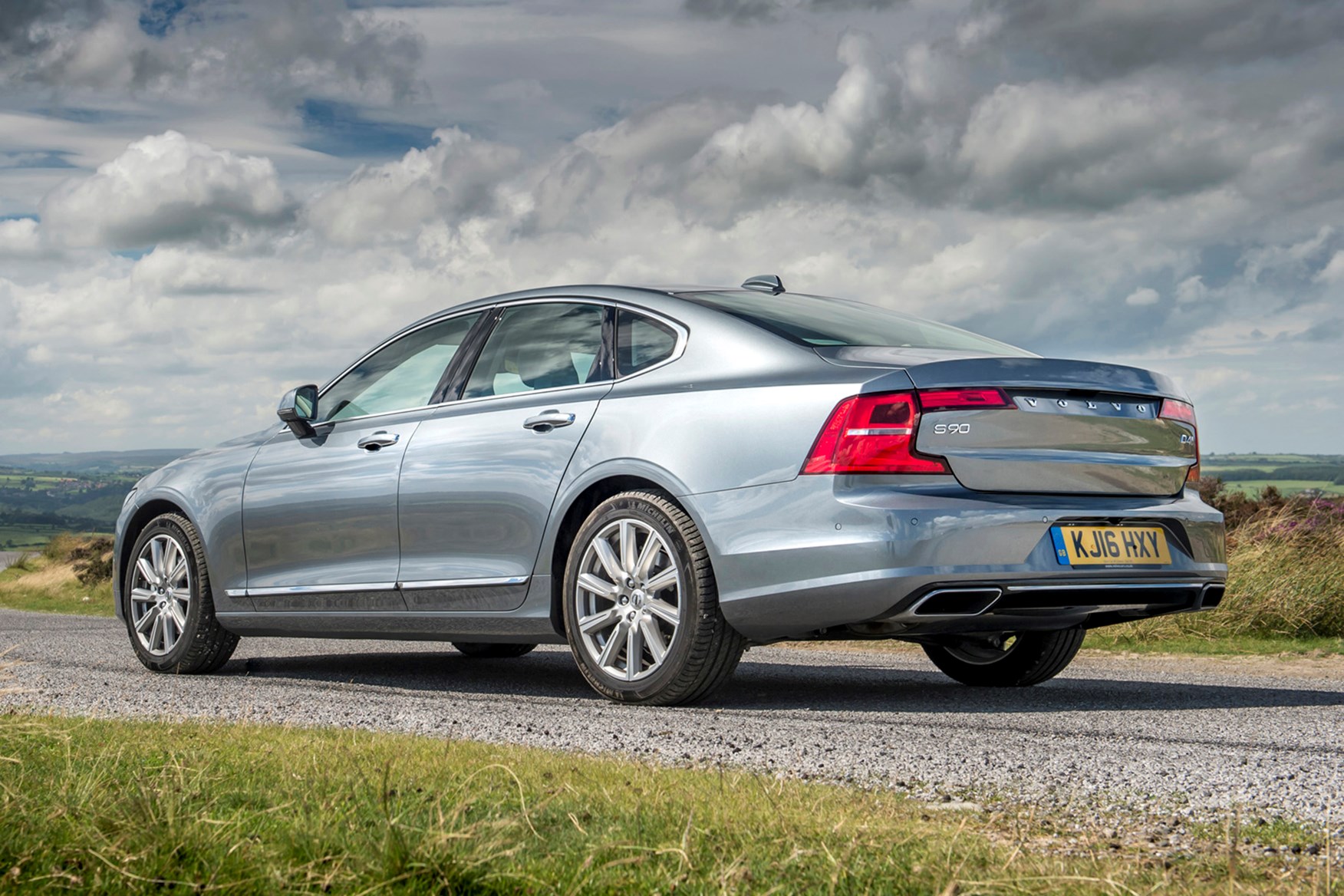 Volvo S90 models for sale
Back to top
Sign up to receive the PARKERS newsletters and receive: