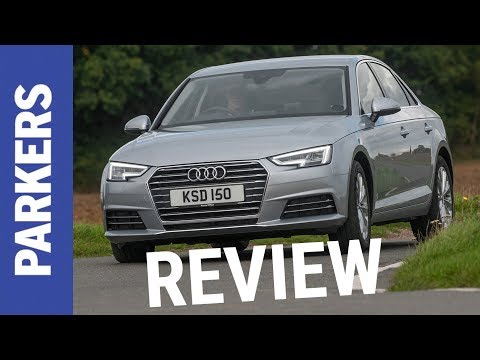 On sale in this form since 2015, the Audi A4 Saloon is the German brand's biggest-selling model, so its mid-life update in 2019 has a vital brief: to keep it fresh and competitive against its key rivals, namely the four-door versions of the BMW 3 Series and Mercedes-Benz C-Class.

Those 2019 tweaks included a sharper-looking front end, neatened styling at the back and introduced some small changes inside to the trims and standard kit list – including standard-fit Virtual Cockpit digital dials and a wider screen, touch-based multimedia display.

There’s no shortage of choice, with a range of petrol and diesel engines, alongside the option of six-speed manual or seven- and eight-speed automatic gearboxes – the former a dual-clutch system that Audi calls S Tronic.

Perennial favourites include 2.0-litre diesel motors – of which there are two new versions as of 2019 with a choice of 136hp or 163hp outputs – replacing the 150hp that was available previously. If you need more grunt there’s a 190hp version that’s been around since this car debuted in 2015. Following Audi's revised naming strategy introduction in 2018, these are badged 30 TDI, 35 TDI and 40 TDI, respectively.

At the top of the range sits the S4 TDI. Before the car was facelifted this featured a powerful petrol engine, but has since been replaced with a 347hp 3.0-litre V6 diesel engine with a whopping 700Nm of torque.

Well-equipped at all trim levels

There are several equipment lines available, progressing from Technik through Sport, S Line, Black Edition and Vorsprung, with the S4 sitting as the range's flagship.

Regardless of which you choose, each A4 is well-equipped, and even the entry-level cars come with 17-inch alloy wheels, LED headlights, an updated (but less easy to use) 10.1-inch MMI Navigation Plus infotainment system, reversing camera and sensors, three-zone climate control and cruise control.

As you move up the range the changes become more cosmetic than anything else, with a sportier, more aggressive appearance as you climb up the hierarchy.

There’s a subtle aggression about the S4 with its unique bumpers and grilles, a discreet rear diffuser and exterior accents picked out in various shades of matt silver. Nevertheless, it may be too subtle for those who like to leave others in no doubt about their performance.

Of course, the options list is vast, and your pockets will need to be deep should you wish to personalise your A4 Saloon. Choices include several colour options, various alloy wheel designs and diameters, a choice of suspensions (standard and adaptively damped), differing headlight technologies, seat upholsteries and interior trims. By and large, we would recommend you stick to the bundled Technology Pack, plus the Comfort and Sound Pack - they're better value.

There’s no change here for Audi, with cabin quality that betters all of its competitors’ and sets the new benchmark for materials, fit, finish and restrained design. Elements of the firm’s other cars are evident, from the full-width air vent strip borrowed from the Q7 .

There are other elements to delight, with the inductive toggle-style switches used to control the climate settings, the driver-angled centre console and the tablet-style screen atop of it – which looks far slicker with a high-quality magnesium surround – than some rival systems.

Certainly for ambiance, the A4's interior will trump that of the Jaguar XE and Volvo S60, but the Lexus IS at least matches it for build quality.

Is the Audi A4 Saloon still a contender in the premium four-door market, especially as it also has the likes of five-door coupe rivals such as the cheaper Kia Stinger and Peugeot 508 Fastback to tempt buyers away? Read our full review to find out.