This car has been superseded by a newer model, click here to go to the latest Mercedes-Benz C-Class Saloon review. 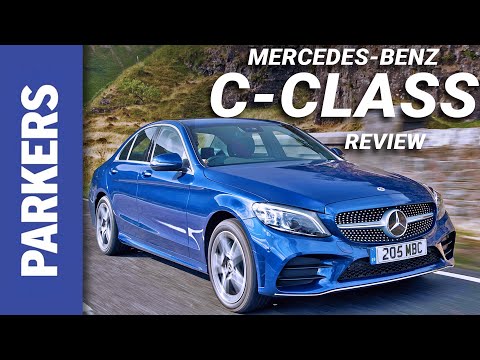 That means the C-Class is highly competitive, despite the length of time it’s been on sale. A common sight on UK roads, and a regular visitor into the UK Top 10 bestsellers list, it is popular with new and used with the UK’s drivers – it looks good, has excellent safety kit, a luxurious interior and the draw of the three-pointed star prominent on the grille. Does that mean it’s worth your attention?

It’s safe and fully equipped with some of the technology you’ll find on the company flagship, the impressive Mercedes-Benz S-Class. Although it’s been on sale for several years, the engines are cutting edge, with mild-hybrid tech in the C 200 and a refined 2.0-litre diesel. And it’s unique in its class by being offered in two plug-in hybrid forms – with a petrol or diesel engine married with a 13.5kWh battery pack.

The Mercedes-Benz C-Class is competing in a very tough market sector. It’s a rival to the popular BMW 3 Series and Audi A4 – as well as the less obviously default choices, such as the recently-revised Jaguar XE and Alfa Romeo Giulia. The C-Class is a comfortable and appealing alternative to its competitors, even if its interior quality lags behind the Audi’s despite its posh look. It’s not lacking in tech, though, with an optional 12.3-inch digital display for the driver now added, which complements the centrally-mounted 10.0-inch infotainment screen.

The C-Class does have its faults, though. The poor manual gearbox is best avoided, and steering that’s lacking in feel keeps it from offering a truly sporty driving experience even in the more powerful models. If you want comfort in your compact saloon, come here – if it’s driver involvement you crave, head in Jaguar, Alfa Romeo or BMW’s direction.

The C-Class’ attributes include a huge wealth of equipment for both safety and luxury, a more transparent ownership proposition and a suite of optional extras that make this car feel every inch the baby S-Class. Two extras we’d urge any C-Class buyer to try before committing include the air suspension (which dramatically improves comfort levels), and the head-up display which shows sat-nav and speed limit information on the windscreen.

If you prefer diesel there’s one engine – but in three states of tune, including one hybrid version. The 2.0-litre twin-turbo four-cylinder offers 194, 245 or 306hp (combined) and ample torque. All except the C 180 come with a nine-speed automatic transmission – the six-speed manual is not a high-point of C-Class ownership.

It doesn’t feel as solid as the Audi A4 inside. As well as featuring some of the advanced technologies available in the S-Class, the C-Class comes complete with the firm’s latest infotainment systems and driver assistance tech, with the usual scroll wheel and touchpad for controlling the majority of the car’s functions.

Our leasing partner, ZenAuto is offering the Mercedes C-Class for per month. The usual terms and conditions apply.*

Click through the next few pages to read everything you need to know about the Mercedes-Benz C-Class including its practicality, how much it costs to run, what it’s like to drive – and whether we recommend buying one.