Other Audi A7 models: 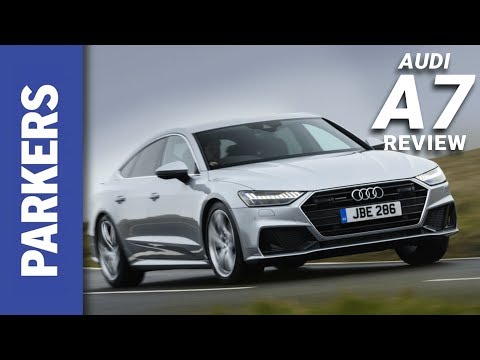 Written by Murray Scullion on 21 August 2020

Sleek, sporty, and maybe even sexy. These are the kind of words Audi wants customers to associate with its A7.

It's the German marque's coupe version of the A6 saloon and in the pecking order of Audi the A7 sits below the uber-luxurious A8, but above the less opulent A6.

The raison d'etre of the A7 is that it offers the practicalities of a five-door (including a hatchback boot) with the stylish lines of the a coupe.

Its biggest competition comes from the same country (Germany), in the shapes of the Mercedes-Benz CLS and BMW 6 Series, both of which are five-door saloons. The Maserati Ghibli is also worthy of mention.

Tech borrowed from luxurious Audi A8

Car companies are well known for sharing technology between cars, and the A7 is no different. It's a go-between for the A6 and A8 and shares much with both.

The A7's technology - its safety systems, infotainment, and fancy lighting is up there with the best in class.

All of this modern technology is wrapped up in an equally luxurious and contemporary-feeling interior. Like the larger A8, the A7’s dashboard uses a blend of brushed metals, leather, piano black trim and a trio of screens controlling all of the car’s major functions.

On first inspection it could feel daunting working out which screen controls particular functions, but a bit of time spent behind the wheel helps to get familiar with the set-up. Ahead of the driver is Audi’s familiar Virtual Cockpit digital dial pack, while the main 10.1-inch touchscreen controls the media, sat-nav, vehicle settings and phone. The lower 8.6-inch screen serves in place of a traditional set of heating and ventilation controls.

The screens use haptic and acoustic feedback, meaning you can swipe and tap like you would on a smartphone, but you can click the screen to select particular ‘buttons’, with vibration feedback to boost the user-friendliness.

There isn’t a huge amount of scope for personalisation when it comes to the interior look – seat options are Alcantara or full leather in either black or slightly less black, but the chairs are excellent and the driving position is good. It feels thoroughly modern inside.

The A7 Sportback has a choice of five different engines – one petrol, two diesel, one plug-in hybrid and the performance-orientated S7. All are 3.0 litres in capacity and use Quattro all-wheel drive. The diesels are badged as 40 and 50 TDI, while the petrol is called the 55 TFSI.

They all use mild hybrid technology which, without getting too technical, allows the A7's engine stop/start technology to come on much quicker after it’s stopped in traffic, as well as recuperate energy recovered from braking and coasting. It also reduces turbo lag (the delay between pressing the throttle and the engine responding).

Four-cylinder petrols and diesels will join the range at a later date, bringing in more economical and efficient options, which will likely appeal to company car drivers in particular.

The newest addition to the engine range is the plug-in hybrid. Formally called the 55 TFSI e, it follows the familiar formula of mating a 2.0-litre petrol engine to a battery, in order to reduce emissions and improve MPG.

Headline figures are 25-miles of all-electric range, an official 134mpg, and a combined power output of 362bhp and 500Nm of torque. It comes with Audi's fabled four-wheel drive system, called Quattro, and can crack the industry standard 0-62mph time in 5.7seconds.

It's a competent, if flawed, car. Want to find out what it's like on the move? Head to the handling section.

Click through these pages to read everything you need to know about the Audi A7 including its practicality, how much it costs to run - and whether we'd recommend buying one.

Other Audi A7 models:

Audi A7 silver side

Audi A7 silver rear side

Audi A7 silver rear side