A Q7 for those who don’t need seven seats 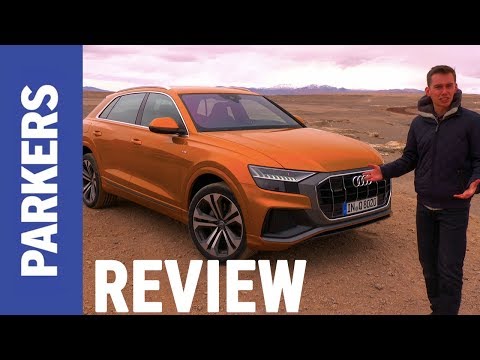 Written by Murray Scullion on 16 December 2019

Designed as the flagship model in the Audi SUV range, the Q8 employs coupe styling traits and an all-round sportier image to the Audi Q7 on which it is based. Wind back fifteen years and such a bodystyle would be largely unheard of, but BMW's X6, and latterly, the Mercedes-Benz GLE Coupe and Porsche Cayenne Coupe opened up a now popular niche to mainstream car buyers.

Along with other rivals, including the Range Rover Sport and Maserati Levante, coupe-SUV crossovers have been tempting buyers out of equivalent coupes and saloons for years and Audi knows this. Hence why it’s thrown everything it has at the Q8, even giving it the brand-new cabin design of the A6, A7 and A8 – something which is yet to debut on the Q7.

Is Audi’s new kid on the block a worthy contender? Read our full review to find out.

Designed to combine SUV practicality and presence with the sporty lines of a coupe, the Q8 features a shorter, more aggressive front end than its Q7 sibling, also displaying a chamfered-off rear roofline to give a more sweeping profile.

Other notable design elements include the frameless doors, octagonal design radiator grille (the new face of Audi Q models) and – in a nod to the original Audi Quattro sports car – blisters over the rear wheel arches.

Showcasing Audi’s updated interior design – also seen in the A6, A7 and A8 – the cabin is dominated by two central control touchscreens and the now commonplace Virtual Cockpit dashboard. Of the two primary screens, the upper display measures up at 10.1-inches and allows control of the car’s media, sat-nav and Audi Connect systems as well as other general settings.

The lower, 8.6-inch monitor, houses menus for the climate control, heated seats and other driver-assistance features include the optional trailer assist (where the car automatically reverses into a space with a trailer attached) and parking sensors/cameras.

Overall, it’s a beautifully appointed cabin packed with expensive feeling, well screwed together materials and comfortable, supportive leather seats. The view out is akin to a slightly lower Q7 (or a slightly higher A8 – whichever way you look at it), yet you still get the commanding SUV driving position popular with many buyers.

Customers can choose petrol or diesel. First up, is a 286hp 3.0-litre TDI, badged as the 55 TDI, producing a hefty 600Nm of torque and capable of accelerating from 0-62mph in 6.3 seconds. It’s a punchy powerplant more than capable of hauling the Q8’s sizeable 2.1-tonne kerbweight around.

The other engine on offer is a 340hp petrol (named the 55 TFSI). We can confirm it’s even more refined than the diesel, yet can’t quite match it for effortless mid-range acceleration. A 435hp SQ8, and 600hp RS Q8 are also available.

Also, a hybrid version – similar to the Q7 E-tron – is thought to be in development, but there’s been no confirmation yet of when it will be launched.

Right from the off, it’s clear that the Q8 is a sportier variant of the Q7. It shares its ability to cover major distances with ease, and thanks to standard-fit air suspension deals with all but the worst road surfaces. The fact that it does so while displaying noticeably more agility in the corners is an impressive feat.

Featuring sharper, more direct steering, the Q8 feels keen to change directions and use its standard-fit Quattro all-wheel drive to power out of corners. It’s an effective machine, even if it’s still far from the last word in driver enjoyment.

Available in base S Line and top-end Vorsprung specs, the Q8 comes with a strong selection of standard equipment no matter which variant you go for. Indeed, all models benefit from air-suspension, cruise control, Virtual Cockpit, leather upholstery and mild-hybrid technology (helping to reduce fuel consumption and emissions).

Upgrade to Vorsprung trim, however, and the toy box expands with goodies such as a head-up display, automatic parking, adaptive cruise control and a Bang & Olufsen premium sound system all included in the price.

Offered either as an option or as standard on the Q8 are a hi-tech selection of 39 driver assist systems. From Audi’s Pre sense with autonomous emergency braking to the front camera enabling traffic sign recognition, the Q8’s gadgets are designed to provide a safer, more relaxing all-round drive for its occupants.

Said occupants are limited to five ­– unlike in the seven-seat Q7 – but practicality is still competitive with the Q8’s rivals. Those in the back will find reasonable headroom (although those over six foot may feel the pinch) and excellent legroom, plus four-zone climate control and the option of heated outer rear seats.

Bootspace, meanwhile, is 605 litres with the rear seats in place and 1,755 with them folded down. Again, this is less than what’s available in the Q7, but comparable to rivals from BMW, Audi and Range Rover.

If the regular Q8 doesn't harbour enough power for you, Audi has two solutions. One diesel, one petrol.

Traditionally you would view those two figures as contradictory - the SQ8 is barely a second slower than the faster petrol model from 0-62mph and yet promises fuel economy in the 30s.

A clever active anti-roll system helps keep body movements in check and all-wheel steering (although not standard) effectively shrinks the car's wheelbase at low speeds, and boosts stability when pressing on.

The RS model offers a different way of going quickly. Breadth is the byword for the RS Q8. Off-roader? Coupe? Track car? Audi reckons it can do all of it. This is in part, down to the technical abilities of the car, but also down to its spec sheet.

Read on for the full Audi Q8 review

Mercedes-Benz
GLE Coupe
4 out of 5 4.0
Advertisement
How much is it to insure?

Audi Q8's rear three-quarter is sleeker than its Q7 sibling

The Q8's interior is based on the Audi A7 and A8's

Audi Q8 will only come in five-seater form

Q8's luggage capacity lags behind the Q7 in five-seat mode