New boy on the scene hopes to make waves 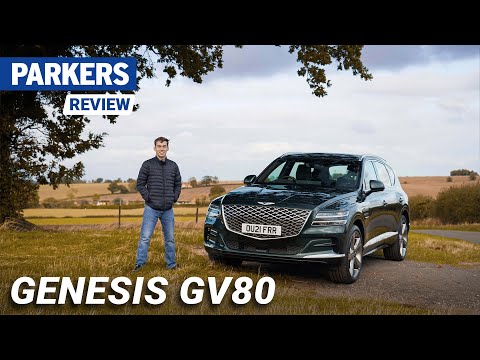 You probably haven’t heard of Genesis. The Korean company is the luxury offshoot of a much more familiar name, Hyundai, and it’s now launched in the UK with a range of two SUVs and two saloon cars. This is the GV80, its largest and most luxurious offering. As with most brand flagships these days, it’s an SUV – along the same ‘big and glitzy’ template as many other large SUVs. It certainly looks very premium.

Genesis is hoping to carve itself a niche in Europe (well the UK, Germany, and Switzerland initially) by offering premium levels of customer service and transparency. All models will come with one price, a five-year care plan, and buying/leasing/subscription options available online. That’s right, no traditional car dealers and no haggling.

We’ve heard this before, but the market has changed – and buyer habits are changing too.

Is the Genesis GV80 any good?

The GV80 is a curious car to pidgeonhole. For example, it’s a flagship for new brand in Europe – a modern brand, with modern values. Yet the only two engines on offer are both standard turbocharged internal combustion engines – there’s no electric or even hybrid systems available.

It’s not Bentley Bentayga big, but at 4,945mm long and 1,975mm wide, it is roughly Volvo XC90 shaped. Like the Volvo, it’s available with seven seats. It’s apparently been designed to blend the aesthetic of two opposing characteristics – in this case athleticism and elegance.

Athleticism is taken care of by the sheer size of it. It’s built like a Rugby prop. While the elegance is carefully taken car of though architecturally-designed elements – like the quad lamp lights up front – there’s also a huge grille, as is de rigueur for luxury cars. The side profile is intersected by a severe diagonal line, which helps the car look less bulky than it actually is.

It’s up against some established premium SUVs with a back-catalogue of brand values to help consumers understand what they’re buying into. The Lexus RX comes to mind immediately, as it’s also from a luxury sub-brand. The bold lines remind us of the Volvo XC90, too. British SUVs, such as the Land Rover Discovery and Range Rover Sport also count as the competition. And of course there are the big German hitters in this market, the BMW X5, Audi Q7, and Mercedes-Benz GLE.

It certainly compares well with its European opposition on the inside. There are no question marks here regarding the quality of the build or the choice of materials – everything feels dense, expensive and beautifully screwed together. Nowhere does that feel more apparent than in the controls you touch most often. The infotainment, for example, can be operated via a solid metal scrollwheel that makes BMW’s iDrive dial feel like a McDonald’s toy.

The 14.5-inch infotainment screen jumps out as a neatly designed aid for the interior. And if that wasn’t enough, below that you’ll find separate controls for the heating/cooling as well as the aforementioned touchpad.

It’s as spacious inside as you could hope for such a big car – the width makes it feel especially palatial. Front passengers have tons of elbow room and there’s space for three across the rear bench. The optional third row of seats, meanwhile, offers about as much space as an Audi Q7 but isn’t as accommodating as a Land Rover Discovery.

The Genesis GV80 can be had with two engines – one petrol and one diesel. No hybrid trickery here, which feels rather outdated in 2021 – they’re purely combustion engines. The petrol is the cheaper of the two, and it’s a 2.5-litre four-cylinder model. It produces 304bhp and gets from 0-62mph in 7.7 seconds. Not bad figures, then, but we feel as though a car this big ought to have something rather more muscular under the bonnet.

The four-cylinder unit feels strained under acceleration and doesn’t make a very nice noise – Genesis dubs this over with an electronic engine note by default, but this spoils the car’s refinement. It’s also not very efficient, returning about 26mpg over many miles of mixed roads. We don’t feel the GV80 petrol has enough performance to justify such poor economy.

As such, the diesel seems a better bet. Though it’s less powerful, with 278bhp, it’s a 3.0-litre six-cylinder unit that feels far more muscular and better-suited to the GV80’s sheer bulk. It’s also significantly more efficient. Both engines are paired to the same eight-speed automatic gearbox, which is smooth and quick to respond.

Handling isn’t the GV80’s focus, but it doesn’t do terribly in this regard. It’s less roly-poly than some of its taller rivals, like the Land Rover Discovery, though its light steering means it’s not as satisfying to drive as a BMW X5 or X7.

As for ride comfort, it’s sadly a mixed bag – at high speeds, the GV80 is very smooth, aided by its camera-controlled suspension and adaptive dampers. But at low speeds it’s jigglier than we’d like.

Customers can choose from two trim levels, called Premium Line and Luxury Line. Both trims are available with either engine and with five or seven seats. Prices start at £56,715.

Premium Line cars get everything you’d expect – all-round LED lights, electrically adjustable seats (the front seats are heated and cooled), adaptive cruise control, that 14.5-inch infotainment screen and a whole swathe of safety features. You need Luxury Line to get real wood trim or real leather seats, though those are the only real upgrades. Luxury Line cars also get access to a wider colour pallette both inside and out as well as some rather gaudy chromed alloy wheels.

The brand is new to Europe and will offer sales initially online or from three retail studios – only one of which is in the UK. We’ll save you Googling. It’s obviously in London. Online will be the esiest way to buy for most people, then.

To help this process Genesis is creating an online configurator and e-commerce platform. Genesis reckons there’s zero wriggle room for haggling, whether you buy online or in a studio.

Read on to find out what we think about the Genesis GV80.