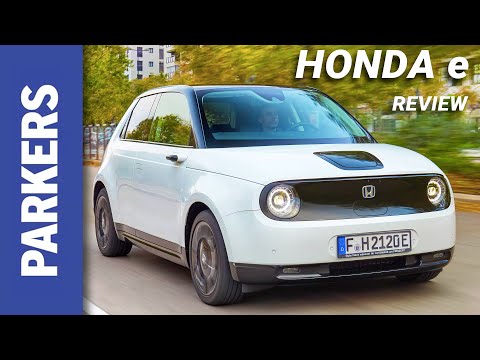 The Honda e is a difficult car to pigeonhole. It’s the Japanese brand’s first real push into the world of all-electric motoring, yet it’s not really a rival to other electric city cars such as the Volkswagen e-Up or Renault Zoe.

It's probably best to consider the e as a rival to the MINI Electric – it’s a fashion-led small runabout that scores big on personality and quality at the expense of some slightly more pragmatic concerns such as running range and interior space. Unlike the MINI, though, it comes from a brand that doesn't typically rank highly for desirability.

At first glance, it’s easy to be disappointed that Honda wasn’t able to more convincingly copy the styling of its Urban EV concept of 2017 – the reaction to which inspired the brand to put an EV into full production. Yet we’re happy to report that in the flesh the e is charming, endearing, and incredibly easy to fall in love with. So easy, in fact, that you might forget about those practical concerns…

But few people can afford to splash more than £25,000 on an expensive toy, so we’ve wiped the dew out of our eyes to take a more objective look at this anime-styled supermini. Is it a case of style over substance?

Production cars rarely resemble the concept cars that preview them a few years prior, but Honda has managed to retain the basics of the EV Prototype’s looks, meaning the Honda e looks every inch the functioning concept car, finally bringing futuristic looks to the masses. But they’ve also managed to throw in some retro appeal too.

Honda’s been building cars long enough now to have curated a back catalogue of distinctive models, and it’s one of these – the Honda N – which has inspired the e’s looks. The key word here is ‘inspired’, because the Honda e is unashamedly modern, not a retro-pastiche in the manner of the Fiat 500.

Although the production version’s stance isn’t quite as dramatic – given that it’s a tad curvier, taller and with smaller wheels (16 and 17 inches available), it does have broadly the same silhouette that was so well received on the original concept.

Honda's only made two changes to the e from the e Prototype as well. They are the removal of the illuminated grille badge - sadly, such items are illegal in the UK - and the side skirts, which no longer bear the legend of 'Honda Design'. Not much then – it looks distinctive and like nothing else on the road, and it’s all the better for it.

Interior is tech-heavy, but user-friendly

The interior of the Honda e is unlike any other car. It really moves the game on for Honda, and we’re pleased that its influence is already being felt in more mainstream models such as the new Jazz.

The dashboard totally subverts any expectations, being hugely screen-heavy (with a driver display, two 12.3-inch touchscreens, all bookended by two displays for the feeds from the rear-facing cameras that replace wing mirrors) yet warm, comforting and welcoming. It’s all about the little touches – there’s fake wood that manages to not feel naff, fabric seats with a sofa-like look and feel, even items such as brown seatbelts that don’t sound like they should work on paper yet really, really do.

Other items just make total sense – why shouldn’t those high-res displays be used for more than a sat-nav? You can use them for screensavers or, if you’re bored while charging up, plug a games console into the standard three-pin socket and HDMI input and keep you and your passengers entertained.

The Honda e promises a WLTP range of up to 137 miles if you go for the standard model. The 35.5kWh Panasonic battery pack stowed under the floor can be topped up to 80% capacity in 30 minutes using a rapid charger, compared with more than 18 hours when connected via three-pin plug at home.

Placing the charging port in the bonnet (instead of on the side) also means that the e doesn’t have to be manufactured differently depending on left- and right-hand drive markets. It’s bang in the centre underneath a large flap that flips open at the press of a button on the key.

As well as the standard 136hp Honda e, there’s also a 154hp version reserved for the Honda e Advance. Not only is it nippier, but it also packs more equipment into its distinctive interior, but range suffers as a result, falling to just under 130 miles on a full charge. The entry-level car uses a 100kW electric motor, while the Advance model uses a 113kW for that nippier response.

How much does the Honda e cost?

The Honda e starts at £26,160, while the Advance model is bumped up to £28,660 due to its higher-output motor and longer kit list, including a Centre Mirror System and Side Camera Mirror System, Honda parking pilot and a premium stereo upgrade. The list prices include the £3,500 plug-in car grant.

The Honda e Advance was available to order as of September 2019, while the regular model was made available in early 2020. .

Click here to see what we think of the Honda e's practicality, interior, running costs and driving experience - or skip straight to the Parkers verdict by clicking here.

Volkswagen
e-Up Hatchback
4.5 out of 5 4.5
Advertisement
How much is it to insure?