Buying used brings almost unlimited choices if you're looking to buy one of many Mercedes-Benz A-Class cars for sale. You can click the links below to search through a wide range of cars for sale across the UK. As well as that, you can use our search tools to tailor your results based on price, location, engine and trim – depending on your own personal preferences. With Parkers, you'll be able to find the right used car at the right price for you.

Do you have your heart set on a new car? Here, you can choose from a good supply of new Mercedes-Benz A-Class cars for sale by clicking the Cars for Sale classified links below. In addition to that, you can also use our search tools narrow your choice of models, engines and trims even further to find the perfect car for you near to where you live.

Want all the benefits of a new car but at a significant cost saving in cash terms? Buying a nearly-new car generally brings you the remainder of the manufacturer's warranty, full main dealer support, and a used car with low miles on it. To search for nearly new Mercedes-Benz A-Class cars for sale on Parkers, click on the links below. You will find the best cars for sale near you, and by using our search tools, you can narrow your choice, and find the perfect Mercedes-Benz A-Class at the right price.

Read review
Leasing
If owning the vehicle isn’t too important to you, you might want to consider leasing as an alternative to purchasing a car outright. You can search over 1,872 Mercedes-Benz A-Class lease deals available from just £264 per month at Parkers with national delivery available.
View Mercedes-Benz A-Class LEASE deals
More

What is the Mercedes-Benz A-Class?

After toying with the idea of a smaller, less expensive range of cars since the mid-1980s, Mercedes-Benz finally took the plunge with the A-Class, which first reached UK shores in 1998.

We’re now into the fourth-generation of models sold under the A-Class banner, with numerous offshoots sold under different names. Those core models are direct rivals to other posher compact family cars such as the Audi A3, BMW 1 Series, Volvo V40 and higher-spec versions of more mainstream offerings such as the Ford Focus and Volkswagen Golf.

Which versions of the Mercedes-Benz A-Class are available?

Appearing to be a svelte styling evolution of its predecessor, the Mk4 A-Class made its debut in 2018.

As before, there will be a number of other models released based on the A-Class including Mk2 iterations of the CLA Coupe and Shooting Brake, the third-generation B-Class, a replacement for the GLA and a further new line in the shape of the longer GLB crossover.

There’ll be two tiers of high-performance Mercedes-AMG A-Classes in time, but so far we’ve in Mk4 guise we’ve only seen the less powerful A 35, although it still packs over 300hp of performance from its 2.0-litre engine.

Before the end of 2019 the replacement for the A 45 will also be available – while details are as yet unconfirmed, we expect a development of the A 35’s engine, but cranked-up to produce over 400hp and a sub-4.0-second 0-62mph time.

Underneath the A-Class’s bodywork is a platform known by Mercedes as MFA2 (Modular Front Architecture 2), with two types of rear suspension, with more expensive models using a costlier multi-link arrangement.

Smaller engines are sourced from Renault – and consequently also appear in various Dacia and Nissan models – but the larger 2.0-litre units are Mercedes’ own design. 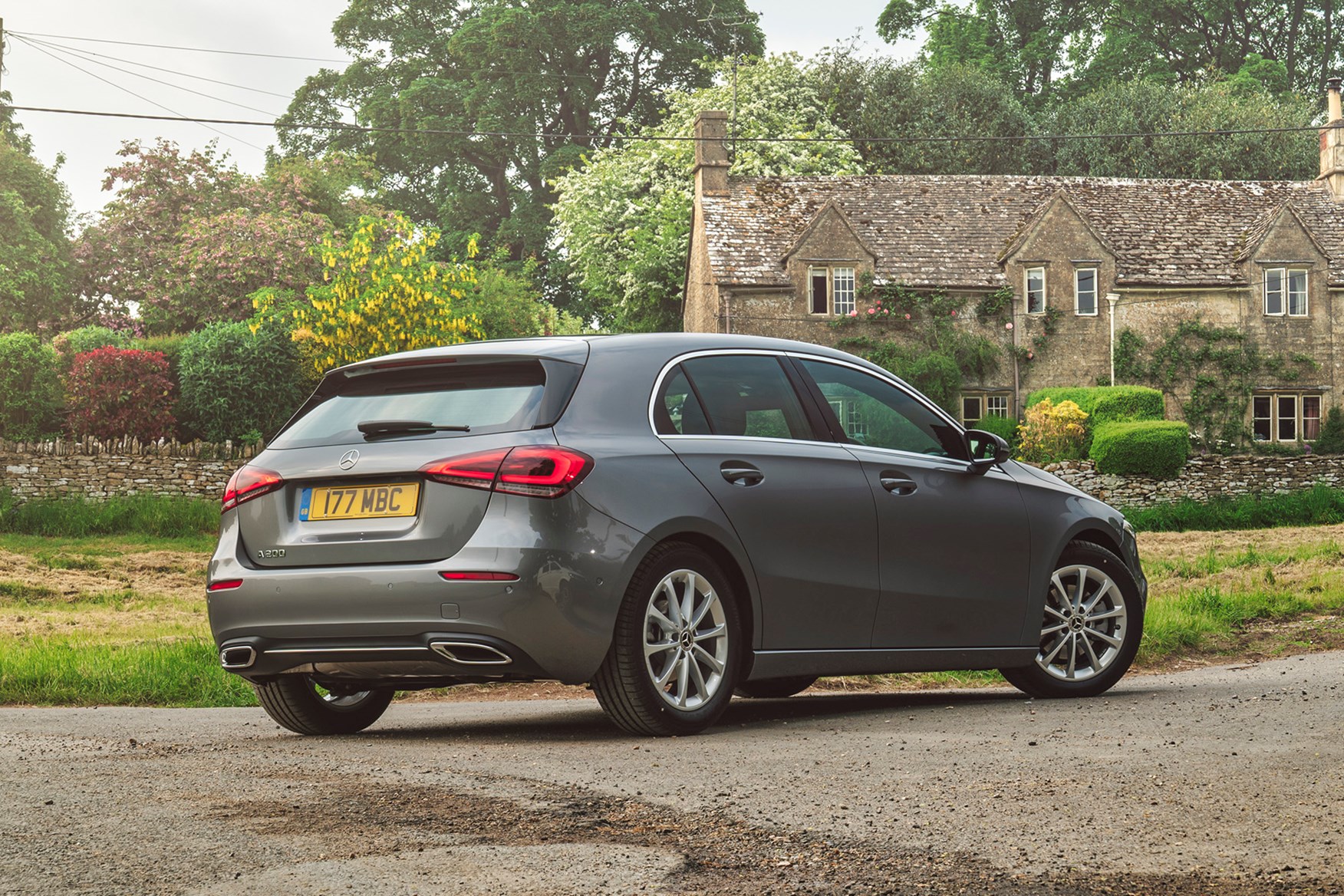 While the exterior might look similar to the A-Class it replaced, the interior is a breath of fresh air, the dashboard dominated by two screens, of varying sizes depending upon how much the buyer spends on it.

Is the Mercedes-Benz A-Class good to drive?

It’s significantly better than the firm-riding Mk3 A-Class, but it still lacks the balance and finesse of BMW’s 1 Series, although the gap is nowhere near as pronounced as it was.

While its dynamic credentials aren’t up to BMW standards, it can be made to ride with greater compliance than its arch-rival, although Britain doesn’t get all of the adaptive suspension options offered to European markets.

Pricier A-Classes have multi-link rear suspension that benefits both comfort and roadholding, but specifying larger alloy wheels will counter this benefit.

How much does the Mercedes-Benz A-Class cost?

Whether you’re looking to buy an A-Class outright or finance one on a PCH or PCP scheme, you’ll find them to be expensive, despite strong resale values.

If you can afford to wait until they drop significantly, you’ll find better value-for-money with either its Audi or BMW rivals.