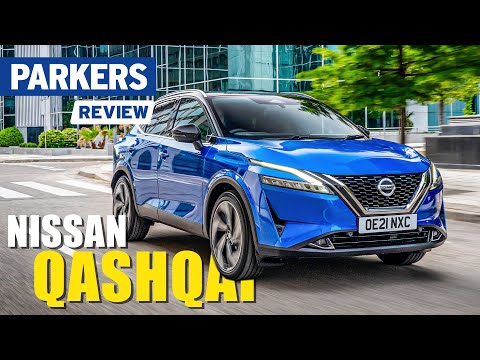 Is the Nissan Qashqai any good?

The all-new third-generation Nissan Qashqai has been a long time coming, and has a lot to live up to. Since the launch of the original in 2007, it's become firmly established as the UK's favourite family SUV and the opposition has been running to catch up. Nissan hopes to leap ahead with this one – all-new looks, an all-hybrid engine line-up and a raft of clever features to give its buyers exactly what they want.

The British designed, engineered and built SUV now boasts new gearbox options and there's not a diesel engine in sight. It does stand out, though, with a radical looking nose, featuring slimline V-shaped headlights that sit high up on the front and are not dissimilar to the Nissan Juke. It now offers contrasting roof colours on more expensive cars, while 20-inch alloy wheels give it a tougher stance.

The first-generation Qashqai helped kickstart the popularity of family-sized SUVs, and the opposition have well and truly caught up with the outgoing model. But from our first drive, the Qashqai is more than good enough to compete strongly with the excellent SEAT Ateca, Skoda Karoq and the big-selling Volkswagen Tiguan as well as see off the Renault Kadjar and Ford Kuga. Read on to find out why.

The Qashqai needs to be comfortable and roomy if it want to appeal to family buyers in an increasingly competitive market. The good news is that it has a commanding driving position and visibility, while the seats are supportive and well-trimmed. In short, it's a very comfortable and well-finished place in which to spend time, and feels as modern as the last one was creaky – it's a massive step forward.

Room in the cabin is excellent – better upfront than the rear – although the VW Group triplets of the SEAT Ateca, Skoda Karoq and Volkswagen Tiguan are more generously proprtioned for three adults. Quality is excellent, too, with some very appealing materials being used inside, even if the design is a little on dull side.

The interior tech has taken a massive leap forward over the old Qashqai with a fast and well-featured infotainment system and a semi-autonomous driving system called Pro Pilot+ that's available as an option on more expensive models. It's excellent in operation, and is a real boon to long-distance driving.

It comes with but one engine – a 1.3-litre with mild-hybrid assistance developing either 140 or 158hp. There's a choice of a new automatic version, using a CVT or a six-speed manual. A more potent E-Power hybrid comes on stream in 2022.

The Qashqai is smooth and refined and well suited to motorway driving. Outright performance is adequate, but you'll need plenty of revs to get going, or accelerating or overtaking at higher speeds, especially when loaded.

The automatic is the pick of the bunch – especially when it's cruising on the motorway at well under 2,000rpm, which is unusually restful for a petrol unit, especially one a 1.3-litre. If you're after decent throttle response you'll find it works best in its Sport drive mode.

Read more on how the Nissan Qashqai drives

The Qashqai range starts with the Visia model, which is offered with the lower-powered 138hp engine only. Next up is the Acenta Premium, which is also offered with the more powerful 156hp power unit. As per most other Nissans, there's also the choice of N-Connecta and Tekna trims, wit h the Tekna+ model topping the model range. A limited edition Premiere Edition was also available for early adopters.

Do you remember the Qashqai +2? The seven-seat model was made between 2008 and 2014. Well, we won't be getting a repeat of that. If you want a seven-seat Nissan SUV, you'll need to go with the X-Trail.

Nissan bosses have hinted at a fast Qashqai Nismo, but we won't know further details about that for quite some time.