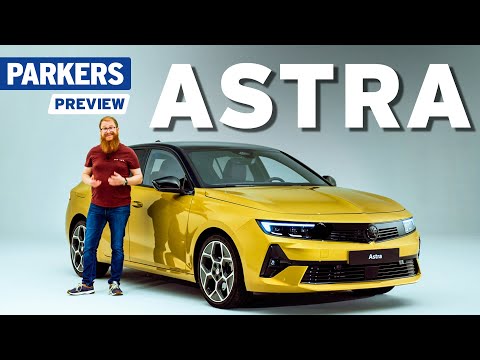 Is the new Vauxhall Astra any good?

It's too early to say for sure, but as it's closely related to the new Peugeot 308 and we rate that, the signs are looking good. For many a year the Vauxhall Astra was perfectly described as worthy, but dull. However, with the brand now part of the massive Stellantis group of carmakers, that’s all set to change with the latest version of the popular hatchback.

The brand’s ‘vizor’ arrangement – a black panel spanning the front of the car – is present in order to bring it into line with other recent Vauxhalls like the latest Mokka, as is the pronounced ridge running down the bonnet. The sides are simpler and the rear is sharper, too, with barely a curve in sight.

There's a wide range of petrols and hybrids powering the range, and an electric version to follow in 2023 – but now, it's shaping up to be an exciting challenger to the Ford Focus, Kia Ceed, Hyundai i30, SEAT Leon and Volkswagen Golf.

Inside, a clean cockpit layout steals your attention. There’s a new steering wheel design – one that’ll presumably make its way onto other new Vauxhalls in the coming years – and a progression of the ‘Pure Panel’ screen layout that first started with the latest Mokka, with two 10.0-inch screens merged together in one solitary design element.

AGR-certified (‘Aktion Gesunder Rücken’ or ‘Campaign for Healthier Backs’) seats – a favourite of Opel/Vauxhall in recent years – are 12mm lower and offer ‘comfort’ and ‘sport’ contouring via electric adjustment here. Vauxhall says Nappa leather and alcantara upholstery are on the options list.

Even on the pre-production car we spent a couple of hours with, quality impressed. There’s plenty of soft touch plastics on the dashboard and front doors, the leather-wrapped steering wheel feels great in your hands and its buttons work with precision. With the Volkswagen Golf taking a real tumble in interior quality recently, the Astra suddenly finds itself near the pointy end of the class.

You’ll also find just enough buttons elsewhere to make navigating the touchscreen and operating the stereo and heater far easier than a Golf or Skoda Octavia, for instance, and there are loads of useful cubbies, pockets and trays to empty your pockets into. In other words it’s as inviting as it is practical.

The boot space is rated at 442 litres with the rear seats up, making it roomier for your luggage than a Ford Focus, Volkswagen Golf and Kia Ceed, but smaller than a Honda Civic. If you need more room, an estate badged Astra Sport Tourer will be launched late in 2022.

The new Vauxhall Astra will debut a new infotainment system to take full advantage of the new Pure Panel screen layout, ditching the laggy, low-res and clunky OS used by almost every former-PSA-now-Stellantis model from Citroen, Peugeot, DS etc. The car we sampled was too early to have a fully working example of this, so we’ll reserve judgment until later.

Elsewhere, Vauxhall’s IntelliLux matrix LED lights are an option, and semi-autonomous driving technologies can be specified, too – something Vauxhall calls IntelliDrive. This combines adaptive cruise control with active lane centring and semi-autonomous lane changing, too. It’s not Tesla levels of driver assistance, but it should help make long journeys a little less tiring.

It’s a predictable bunch, given the new Astra’s shared DNA with the new Peugeot 308. There’ll be 110 and 130hp petrol options, with a six-speed manual standard and an eight-speed auto optional on the punchier engine. A single 1.5-litre diesel with 130hp will be available with a choice of manual or auto.

A first for the Astra, however, is the addition of a not one but two plug-in hybrid variants. First up is a 180hp version which cracks 0-62mph in a respectable 7.9sec with a punchier 225hp version dropping this to 7.7sec making it the fastest Astra available. Both are expected to cover around 35 miles on official tests, giving CO2 emissions from just 24g/km and economy of up to 256.8mpg. That’s not quite Mercedes A250e good, but still bob on for the class.

There’s even an all-electric Astra-e due in early 2023, although details on this are scarce. Hopefully it’ll improve on the 50kWh battery and 136hp motor currently found in many Stellantis electric cars such as the Peugeot e-208 and e-2008.
Vauxhall says the new Astra is 4mm longer but with a 13mm increase in its wheelbase and is 14% more torsionally rigid than before for better handling.

GS Line models, providing a sportier, more aggressive look, get a contrasting black roof and black 17-inch alloy wheels, as well as a blacked-out Vizor panel and Vauxhall badge. On top of Design models, some of the key features of the GS Line include Forward Collision Alert, a 360-degree parking camera, a heated steering wheel and heated front seats.

Ultimate spec comes at the top of the Astra tree and includes a whole suite of tech and driver assistance features. Some of the elements differentiating Ultimate versions include 18-inch wheels, adaptive headlights, a head-up display and wireless phone charging. There's an expanded array of driver assistance and semi-autonomous functions such as lane change assistance, a blind spot alert, Lane Positioning Assist, a rear cross traffic alert system and semi-automated lane-changing capability.

The new Vauxhall Astra has undergone a complete transformation, combining an appealing exterior with a well-built and easy to use interior. Combined with an efficient range of engines, it could be a real contender in the class.

We'll get to drive this generation of Astra later this year, but until then, enjoy the video and images, above. Full price and spec details can be found here, with orders opening in autumn 2021. The first ones will be delivered in the first few months of 2022.