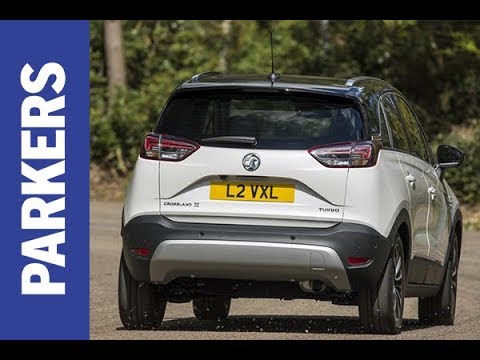 The Vauxhall Crossland X promises buyers a utilitarian option in the increasingly crowded family SUV section of the market. Designed for versality, value for money and space, it’s the smallest SUV in Vauxhall’s range slotting in beneath the slightly larger Mokka X and the considerably larger Grandland X. It also shares the same underpinnings as the Peugeot 2008, owing to the Peugeot Citroen Group’s ownership of the Vauxhall brand.

Measuring up at 4.21 metres long, the Crossland X’s rivals include the Ford EcoSport and Renault Captur, as well as the consistently popular Nissan Juke. Is Vauxhall’s mini SUV a serious contender, and should you buy one over its rivals? Read the Parkers in-depth review to find out.

How does the Vauxhall Crossland X drive?

We found the Crossland X to be a solid drive, with efficient and well-designed engines and lots of interior space. You get lots of standard equipment too, but this can push the price up towards £20k, which isn't far off the price of a larger Mokka X.

Buyers should be aware that it has a very high driving position and the body leans a lot mid-corner, which can be somewhat disconcerting if you accidentally go into a bend too quickly. However, the engines we’ve tried are accomplished and the handling competent enough on UK roads. Ride comfort is finer over smoother surfaces, yet lacks the maturity to iron out bumpy roads.

Our favourite engine is the 130hp 1.2-litre Turbo petrol mated to a six-speed manual gearbox, but this is only available on Tech Line Nav trim and above. However, the 110hp version of this engine is more popular – making up around 50% of sales in SE specification – but we didn’t enjoy driving that one as much. It doesn't feel as punchy on the move, meaning you need to work the gearbox much harder if you want a burst of acceleration.

The Crossland X is available with specially designed AGR-certified seats up front (which means they've been built with the German Campaign for Healthier Backs, so should be super-comfortable – we’ve not tried them yet), and optional adjustable rears can be slid backwards and forwards to prioritise luggage space over legroom.

Its boot measures 410 litres with the rear seats up, and that expands to 520 litres with them moved forward. And folded down completely, luggage capacity increases to 1,255 litres. The interior is dominated by a large 7.0-inch touchscreen (or 8.0 inches for extra cost), and on the driver aids features list you get the IntelliLink infotainment systems as well as Apple CarPlay and Android Auto.

It's a good-looking setup, with the centre console horizontally aligned to the driver for added functionality. High quality finishes are provided with chrome accents around the cluster and air vents, while the centrepiece of the interior is the touchscreen. However, we were less than impressed with the infotainment system. Its screen was slow to respond to fingertip inputs and it lacked the powerful processing power of more expensive units.

There’s a decent array of equipment even on base-spec SE cars, see the Features page for a full run-down. But highlights include dual-zone climate control, that large infotainment screen and six airbags. Other kit available as you move up through the range - taking in SE Nav, company car-focused Techline Nav, Elite and Elite Nav as well as the optional extras – includes adaptive forward lighting and head-up display.

The Crossland X has largely predictable styling, with Vauxhall’s signature LED daytime running lights, chrome detailing and the floating roof – a styling feature shared with the Adam. Being a 'ruggedised' SUV-crossover, there's the usual cladding, high-mounted rear lamp clusters and raised suspension. Vauxhall has aggressively priced the Crossland X (as it has with the Insignia Grand Sport), majoring it on value, and hopes to repeat the success of the Mokka X, which is consistently one of the UK's top 10 best-selling cars.

So, is the Vauxhall Crossland X worth your consideration? Read our full review to find out.

Renault
Captur
3.8 out of 5 3.8
Advertisement
How much is it to insure?