Frontman of legendary 70's rock band Thin Lizzy, the late Phil Lynott, said to his guitarist and erstwhile right-hand man, Scott Gorham, who at the time was having a meltdown with his playing, that, 'mistakes make you human'.

I've never forgotten that and have repeated this mantra on many occasions, sometimes when handing out advice to others at a lower level than me, and on many more occasions, when I've got something wrong.

Journalists don't usually admit mistakes but when it's there in black and white it's time to put your hand up and say, 'Yep, I am human.'

If you had taken the trouble to read the previous update and indeed, the one before that, you would have noticed that the mileage readout on the VW Golf jumped from 6,009 (perfectly reasonable), to 10,300 (absolutely ridiculous) in what would have been a period of two weeks. That's 3,291 miles covered in around 13 days.

Now I do cover a lot of miles, but ummm... not that much.

So, here's what happened. As I was noting down the mileage I inadvertently clicked on a dash display button located to the right of the main binnacle. When you do this it shows when the next service is due. I did this and dutifully noted down what I though the mileage was - 10,300 miles. I took it as read, and jotted it down for the first August update.

I had recorded the miles to the next service, not the mileage covered. Doh!.

A few days later my colleague Lewis Kingston borrowed the car and during the loan he had to fill up with petrol. He spotted the error and kindly re-adjusted the fuel calculator record to the Golf's correct 8,854 mileage reading and then calculated the proper fuel consumption. He's a very nice man and, as such, didn't point this out to me at the time. He assumed that I would spot the error the next time I filled up.

He assumed correctly, and I did.

Now, just for the record, the mileage at the time of writing is 9,277 miles and the distance interval for the next service is 9,200 miles.

This tale should teach you something, and that is... 'Don't let other people drive your car because you'll get found out.'

I'll get my coat. 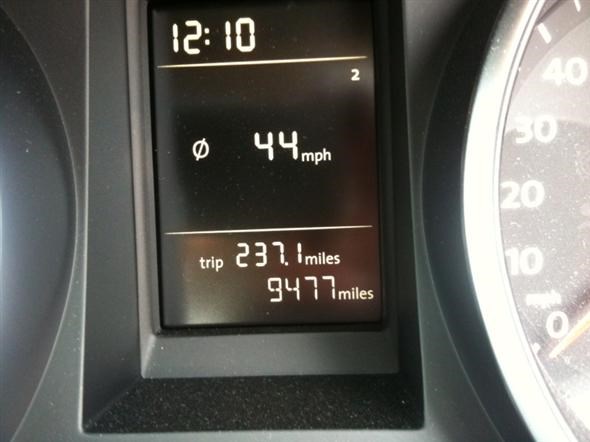 This is the correct reading - the odometer reading 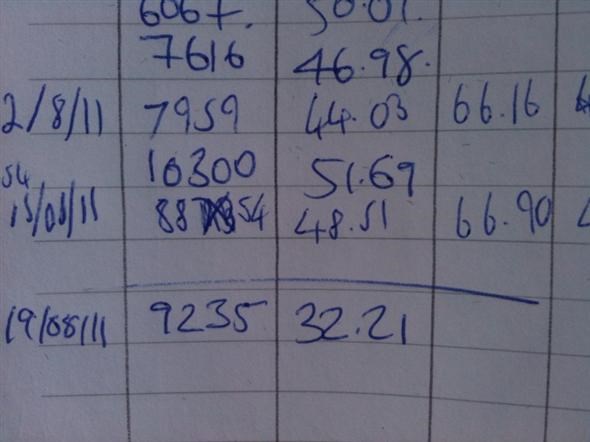 Lewis spotted the error and corrected it. Nice work.