Buying used brings almost unlimited choices if you're looking to buy one of many Audi A7 cars for sale. You can click the links below to search through a wide range of cars for sale across the UK. As well as that, you can use our search tools to tailor your results based on price, location, engine and trim – depending on your own personal preferences. With Parkers, you'll be able to find the right used car at the right price for you.

Want all the benefits of a new car but at a significant cost saving in cash terms? Buying a nearly-new car generally brings you the remainder of the manufacturer's warranty, full main dealer support, and a used car with low miles on it. To search for nearly new Audi A7 cars for sale on Parkers, click on the links below. You will find the best cars for sale near you, and by using our search tools, you can narrow your choice, and find the perfect Audi A7 at the right price.

Read review
Leasing
If owning the vehicle isn’t too important to you, you might want to consider leasing as an alternative to purchasing a car outright. You can search over 784 Audi A7 lease deals available from just £581 per month at Parkers with national delivery available.
View Audi A7 LEASE deals
More

What is the Audi A7 Sportback?

The Audi A7 Sportback is a large, five-door coupe that fits into the Audi range just above the more practical A6, with which it shares a number of components.

Now on its second generation, the A7 places a high emphasis on style, with a very distinctive appearance that sets it apart from other Audis and rivals such as the BMW 6 Series Gran Turimso and Mercedes-Benz CLS Coupe.

Technology is another major area of importance for the A7, as it’s one of the showcase models for the entire Audi range, featuring many of the same toys and assistance systems as the flagship Audi A8 limousine.

At a glance 2019 Audi A7 Sportback specs

Which versions of the Audi A7 Sportback are available?

Launched in 2018, the Mk2 Audi A7 Sportback (known as the Type 4G9; the Mk1 was the Type 4G8) comes in just the one bodystyle – a five-door coupe with a large tailgate.

The engine line-up is slightly difficult to decipher now that Audi refers to them by two-digit numbers rather than physical capacity, but there are 2.0-litre four-cylinder and 3.0-litre V6 options for both petrol, and diesel. 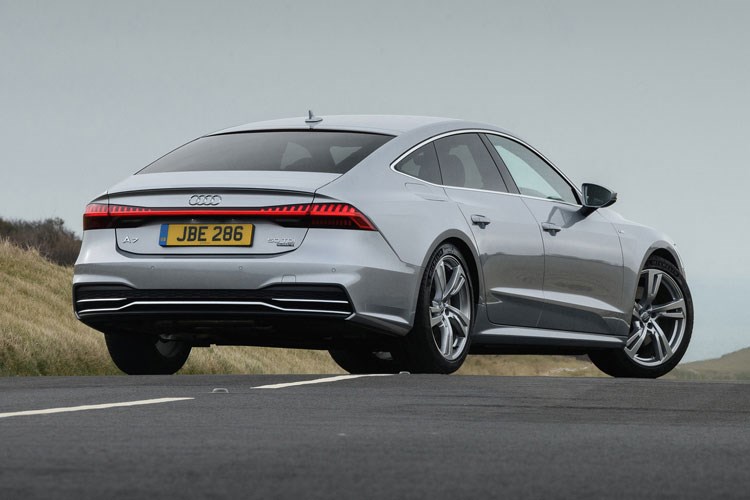 Entry-level 2.0-litre diesels – known as 40 TDI models – are available with front-wheel drive only, for the lowest cost and the highest possible fuel economy. But the rest of the A7 range comes with Quattro four-wheel drive as standard. Plug-in hybrid versions of the A7, badged TFSI e, will become available in early 2020.

All A7s feature an automatic transmission with either seven or eight gears. 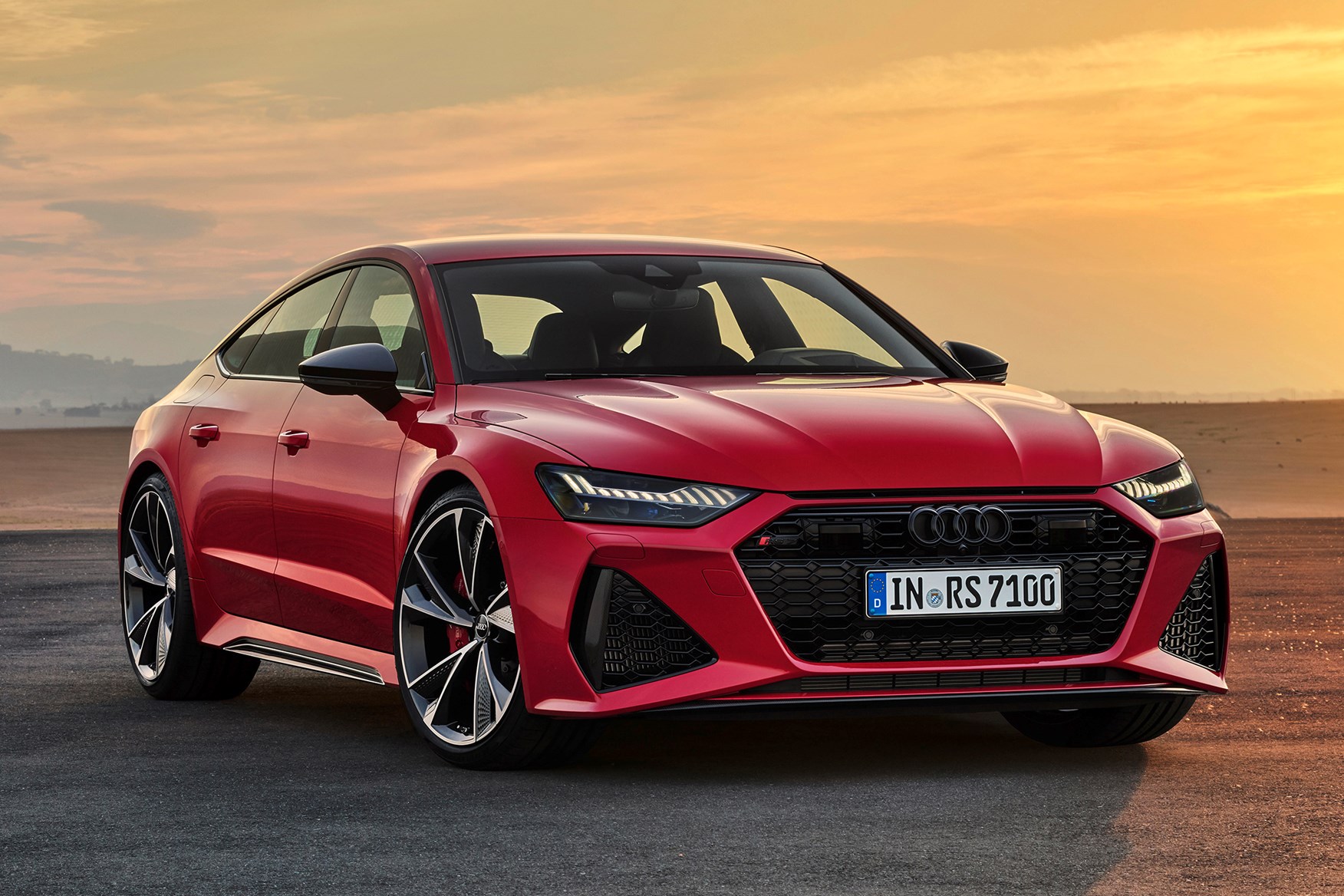 Audi reintroduced the S7 nameplate in summer 2019, but this time it was propelled by a 349hp 3.0-litre V6 diesel engine featuring mild-hybrid technology. Similar fuel efficiency boosting electrification also appears in 2020's new RS 7, but the utter focus remains on performance with 600hp and 800Nm of torque generated from its 4.0-litre twin-turbo V8 petrol powerplant.

The A7’s styling is characterised by hard, angular lines that are deployed in a manner designed to emphasise the car’s width.

There’s a faceted look to the rear that makes a link between this and the previous version, while the new, full-width light bar emphasises the A7’s broad hips.

The clean curve of the roof is a visual treat from the outside, but does mean rear headroom is a little limited on the inside. 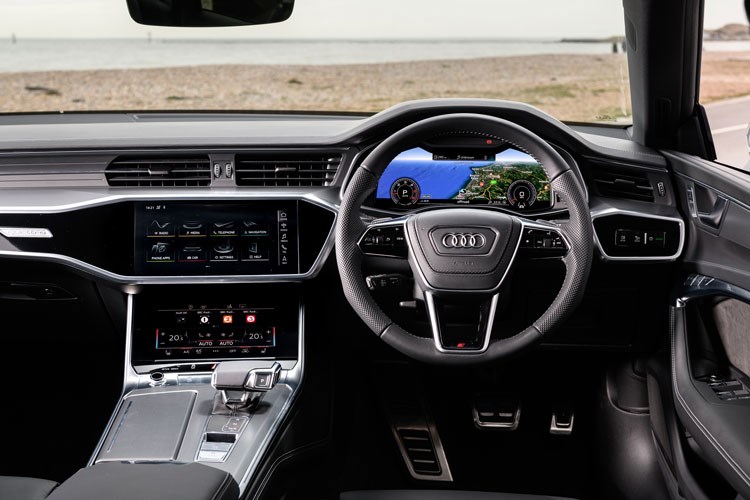 You’ll find the cabin is heavily influenced by the look of the latest A8, and deploys much of the same technology – including the dual-touchscreen set-up that controls most interior functions.

The A7 is related to the A8, the A6, the Q7 and the Q8 under the skin – as well as a number of non-Audi models from the Volkswagen Group, including the Bentley Bentayga and Porsche Panamera. How’s that for pedigree?

Is the Audi A7 Sportback good to drive?

While there is a choice of driving modes as standard, exactly how the A7 drives will depend on how much you’re prepared to spend on options.

As standard, the ride is a little on the firm side – especially on S Line suspension – but you can upgrade to adaptive dampers or even full air suspension if you prefer. The latter in particular brings greater comfort. 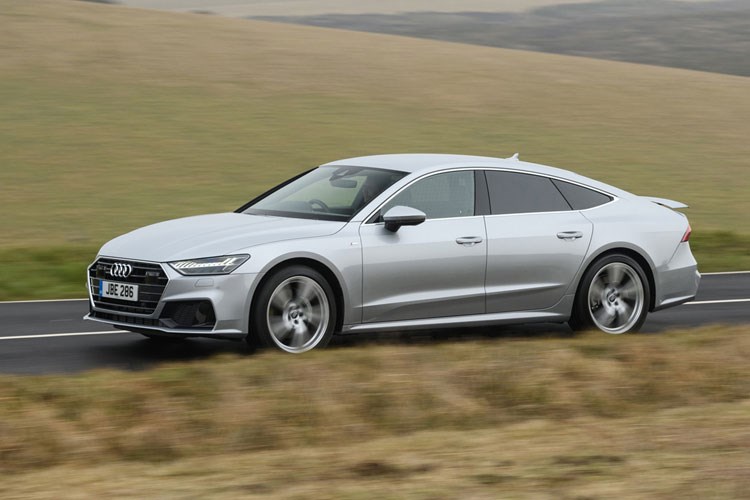 The A7 is a sharp steering machine, and well-controlled in the turns. But you’ll always be aware how big it is, even with the optional rear-wheel steering helping to make it as nimble as possible.

How much does the Audi A7 Sportback cost?

As a large, luxury Audi in a trendy, sporting bodystyle, the A7 Sportback unsurprisingly commands hefty list prices.

However, you’ll still find it compares well to those BMW and Mercedes rivals – especially if you’re planning to buy an A7 using finance, where it typically comes in at usefully less per month.

Discover what Audi A7 drivers think of their cars with our real-world owners’ reviews.

Audi A7 models for sale
Back to top
Sign up to receive the PARKERS newsletters and receive: