The Mazda2 has always been trying to emulate the success of the Ford Fiesta. The Fiesta has always been a popular car but the Japanese maker is keen to play catch-up with the revised 2.

With minor design changes and upgraded engines, Mazda is hoping that this mid-life facelift will send sales soaring and that the 2 will go head-to-head with the Fiesta in this sector of the market.

Minor style changes to the exterior include a new bumper and the refreshed 2 gets the familiar front face seen on other models like the 3 and the 5. Other changes include new front fog lights and newly designed 16-inch alloys.

Inside the improvements include a refreshed instrument panel, new seat patterns and improved materials. Again the changes are far from extensive but they do make it a slightly nicer place to be than before.

The major changes have come on the engines and Mazda hopes that these cleaner engines will help to improve sales. A number of upgrades including higher gear ratios have been implemented to help improve emissions and economy.

Both 1.3-litre models come with a five-speed manual gearbox however, for the first time in the 2 line-up, potential buyers can opt for an automatic which returns 44.8mpg and 146g/km of CO2, resulting in a BIK band of 17%.

Only available on the 1.5-litre variant, the four-speed auto 'box is surprisingly smooth but better off if you drive short distances around town. Higher speed tends to make engine noise more intrusive.

Other improvements on the range include a new suspension set-up intended to give a more comfortable ride, although there seems to be little difference between this and its predecessor.

As with the previous car the handling is sharp and the engines are nice and eager. The interior is definitely an improvement. Unfortunately the overall package still falls short of the Fiesta benchmark.

Ford Fiesta - still the class leader for both style and performance, but the Mazda is closing the gap quickly in both categories.

Hyundai i20 - the budget option in the class. Don't be put off by the low price as the i20 is a serious contender that comes with the added bonus of a five-year warranty. 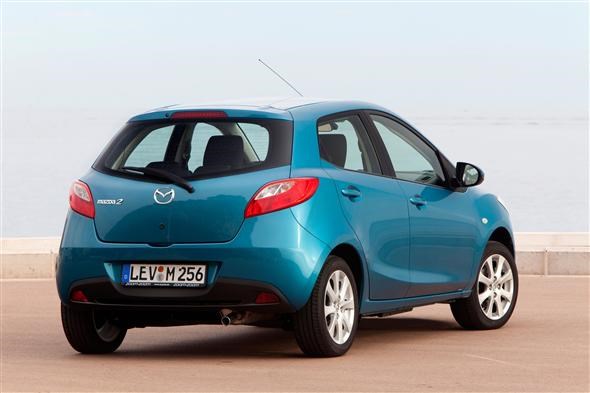