Volvo has revealed an estate version of the new S60 which it hopes will offer a rival to the established premium brands in the junior executive class.

The V60 goes on sale this autumn with prices estimated to start at £24,000. This places it as a cheaper alternative to the likes of the Audi A4 Avant, BMW 3-Series Touring and Mercedes-Benz C-Class estate.

Based on the S60 saloon which was launched earlier this year, the V60 brings increased luggage space and a more versatile interior. Boot space is 430 litres - slightly less than in a 3-Series Touring. The V60's rear seats fold down in a 40/20/40 layout to give increased flexibility.

Volvo will offer the V60 with four petrol engines and three diesels at launch. The latter will be a DRIVe low emission version offering 115bhp and two five-cylinder units offering 163 or 205bhp.

Full economy and emissions figures will be available closer to the car's UK launch.

Volvo is emphasising the sporty nature of the V60, but safety hasn't been forgotten about. The firm's City Safety technology which automatically brakes the car if the driver doesn't react to an obstacle is standard, while Pedestrian Detection is an option.

The V60 is also available with the BLIS blind spot detection nsystem and Lane Departure Warning. 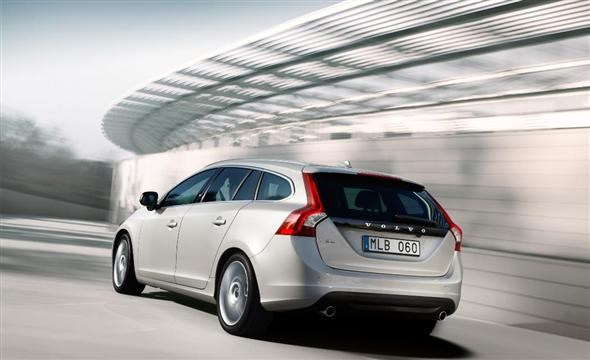