Hyundai has released pricing for the Kona Electric - a version of the small SUV powered by electricity, meaning zero tailpipe emissions and extremely low running costs.

The headline figure here is BIK tax lower than the popular Nissan Leaf. It marks a point at which electric cars are becoming viable choices for many drivers, as range increases and the charging infrastructure grows.

It'll be available in three trim levels: SE, Premium and SE Premium. There are two powertrains - one with a 194-mile maximum driving range and the other with capacity for 300 miles between charges. SE and Premium cars get the former, while Premium and SE Premium models can have the latter.

Joining the current range of two petrol engines, a zero-emission electric model gives the crossover extra appeal for company car drivers because benefit-in-kind tax is based on CO2 emissions - and electric vehicles don't have any - plus the P11D value.

A base-spec Nissan Leaf can be had from £57 per month - a Visia with a 40kWh battery, that has a claimed maximum range of 235 miles.

The lowest company car tax in the conventional-engined Kona line-up is a 1.0-litre T-GDi petrol in S specification (which the Electric isn't available in), and that'll set you back £64 per month minimum. That shows what good value the plug-in version is.

However, it's likely lease rates for the Electric will redress the balance with the rest of the Kona range somewhat, if that's how you've chosen to get your car. 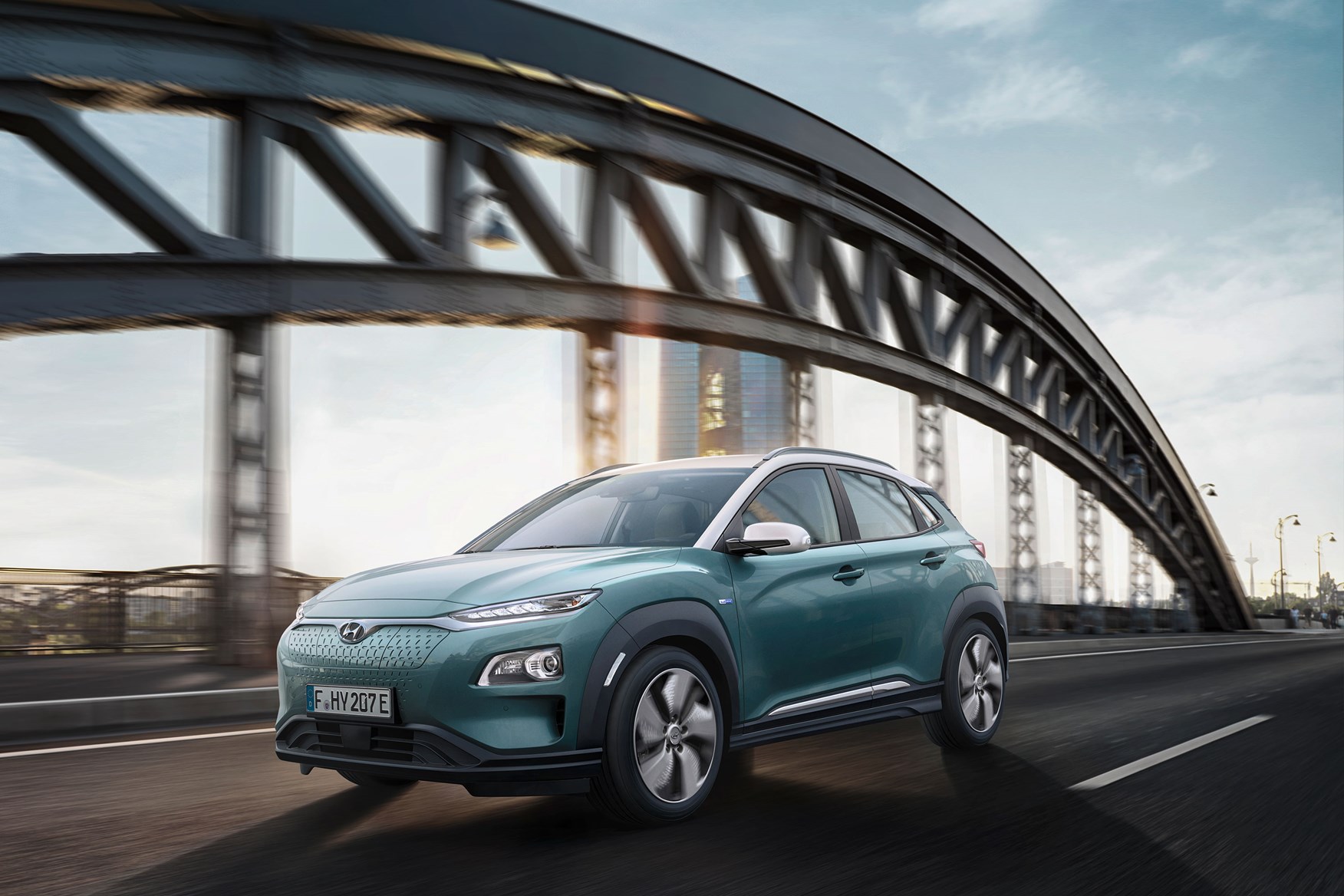 Keeping with the SUV feel, Hyundai has installed a shift-by-wire system that incorporates paddle shifters to simulate gears. Rather than changing ratios, these adjust the intensity of the regenerative braking system, allowing more control over how much it slows down when you lift off the throttle.

Taking advantage of the space freed by removing the traditional gear lever, the Kona Electric has more interior storage space beneath the uncluttered centre console design.

As with the rest of the Kona range, two-tone paint and funky colour combinations are available to make your Hyundai stand out, and a choice of materials for the black or three-tone blue and grey interior complete the personalisation. 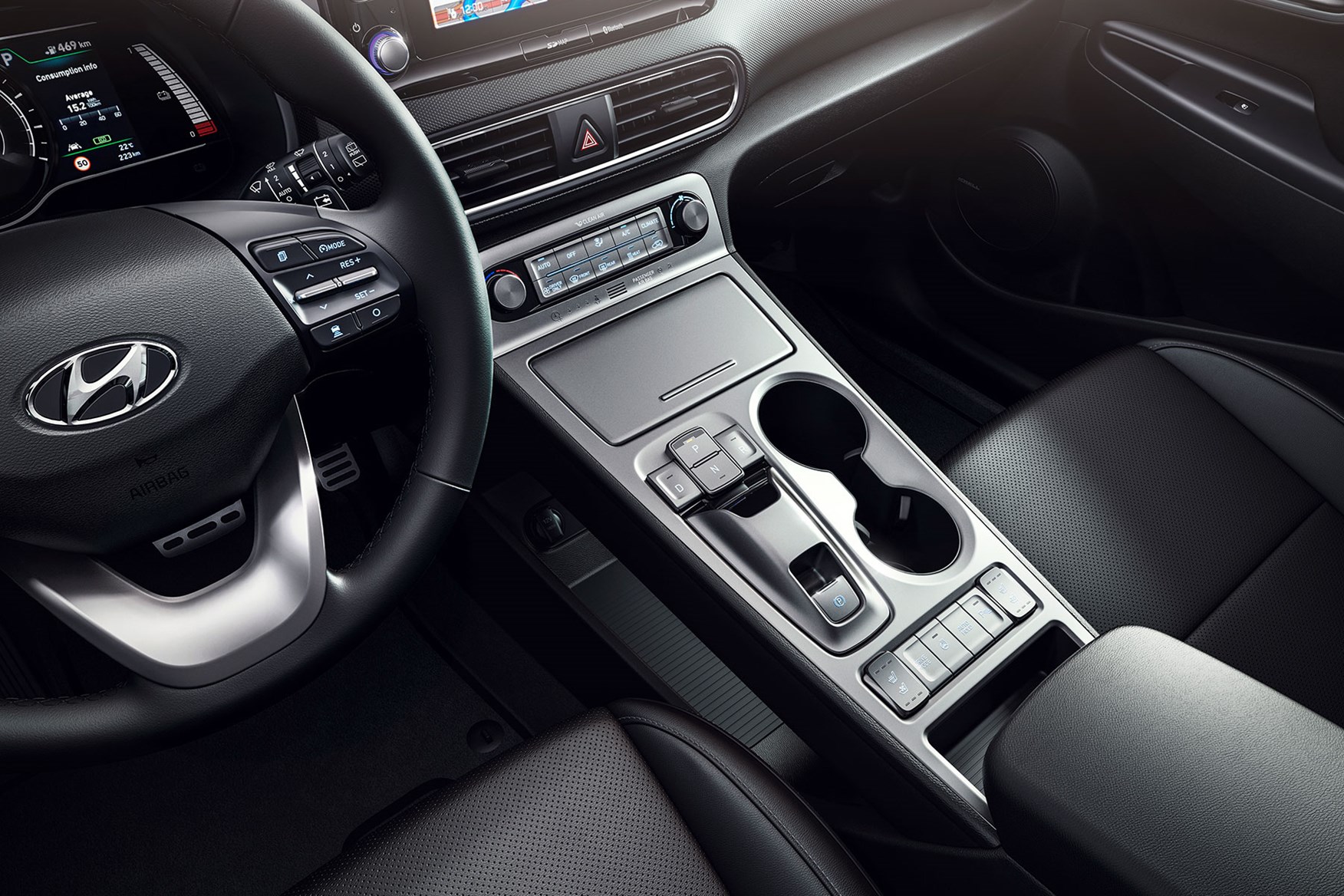 Keen drivers will be tempted by the strong performance from the 64kWh Kona Electric. A 204hp electric motor producing 395Nm of torque delivers a 0-62mph time of just 7.6 seconds, quicker than the fastest petrol-powered models.

If you primarily cover short distances and urban trips, there's a 39kWh version. Reflecting the reduced battery capacity, the range drops to 194 miles. This has the same 395Nm torque rating, but is quoted at 135hp and a 0-62mph time of 9.9 seconds. 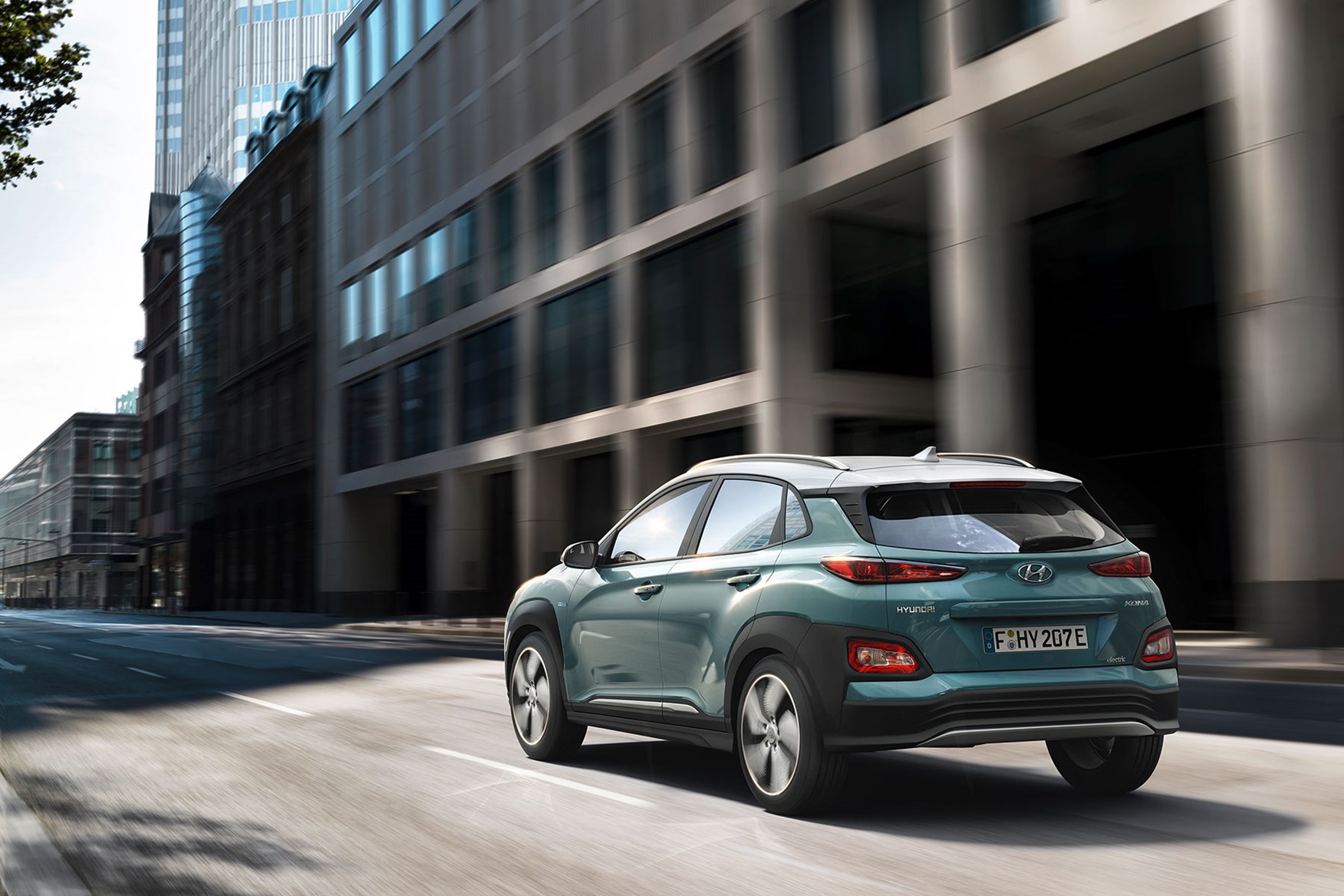 A domestic charging cable is provided; carrying the cable cuts the 373-litre luggage capacity down to 331 litres. Both battery options are lithium-ion polymer technology.

Likely to be the most expensive model in the Kona range, the Kona Electric comes with an extensive list of features. There's a head-up display above the 7.0-inch virtual instrument panel, and these can be supplemented by an optional sat-nav with 8.0-inch display. 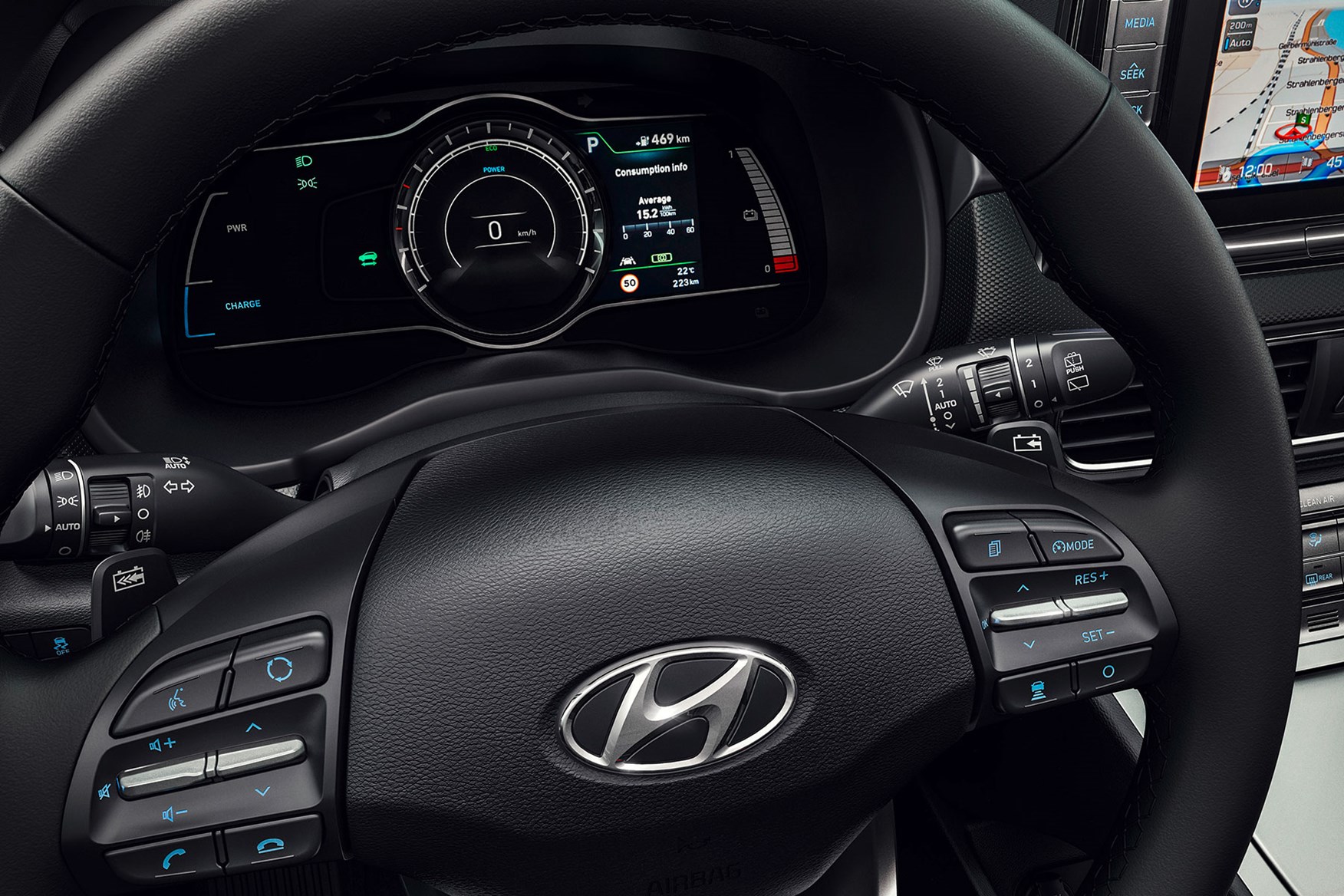 Many of the safety features also benefit from the high resolution head-up display, which carries speed limit warnings, blindspot and distance alerts, and media information alongside speed and adaptive cruise control settings.

Comfort levels are similarly high, with the Kona Electric featuring electric front seats with eight-way adjustment, plus two-way lumbar support on the driver's seat. Both front seats are heated and cooled; a useful way of providing passenger comfort without using valuable electric power to heat the whole car. Optionally, the steering wheel can be heated too. 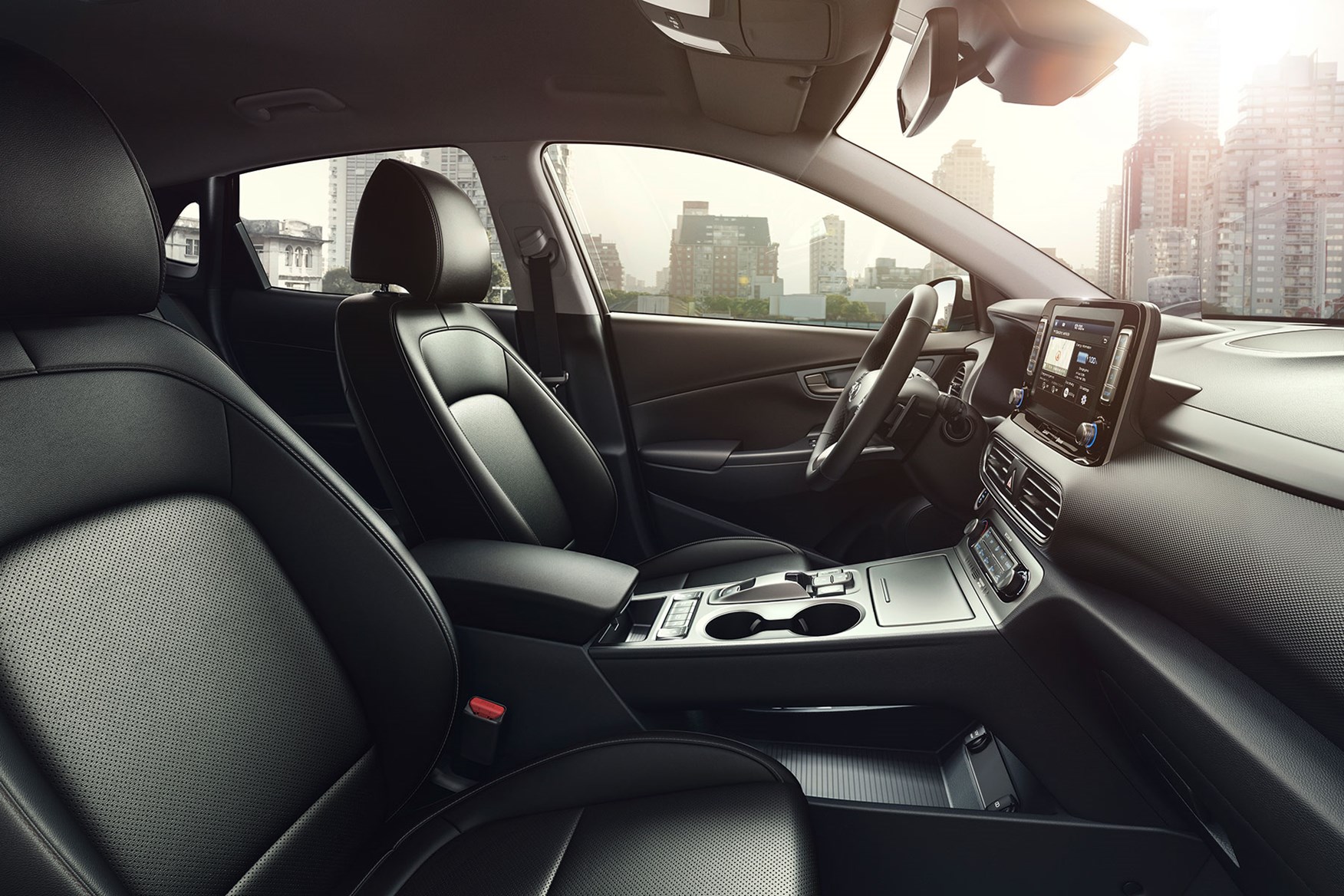 Check out the following for more electric car content: