This car has been superseded by a newer model, click here to go to the latest Dacia Sandero Stepway review.

SUV-style looks add appeal to the Sandero, but at a high price – for a Dacia 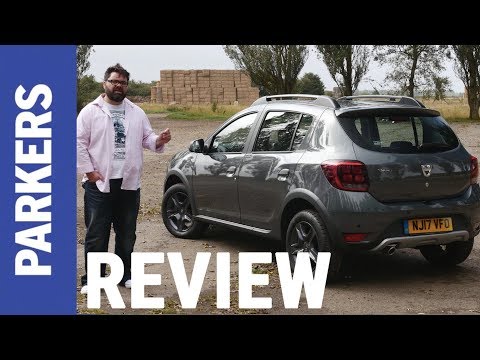 Written by Parkers experts on 04 February 2020

SUVs and crossovers really are the flavour of the moment, but not everyone wants to deal with the added size, weight and complexity of a true off-roader. That’s why cars like the Dacia Sandero Stepway are so popular – they bring some of the glamour of an SUV but in the same easy-to-operate package as a regular hatchback.

The Sandero Stepway is a halfway house between Dacia’s entry-level hatchback, the regular Sandero, and its true crossover, the Duster. However, the alterations are for the most part cosmetic, as besides a slightly raised ride height there’s no additional ability provided.

Instead what you get is a bespoke look with bulked-up wheel arches, roof rails and chunkier alloy wheel designs, plus different interior fabrics.

In terms of concept, then, the Sandero Stepway is similar to the likes of the Ford Fiesta Active and Kia Picanto X-Line, but it’s physically larger and significantly cheaper than either. The bargain of the century? Well…

Expensive for a Sandero

The Sandero Stepway’s starting price is around £2,000 more than the basic Sandero – which may not sound like much, but given Dacia’s status as a budget brand it’s actually quite the leap skyward. The news gets worse as you move up through the three trim levels – top-spec Techroad models cost more than £12,000.

That’s still a snip compared to most rival models, but it’s important to understand what you’re paying for with a Dacia. These cars are based on the same proven, but elderly underpinnings as a twenty-year-old Renault Clio. That means that, even compared to the very cheapest of comparable modern motors, it’s seriously off the pace in terms of refinement and technology.

This means that the Sandero Stepway misses out on the latest safety kit, such as lane-keeping assist and autonomous emergency braking. Its cabin is old-fashioned, with what little modern equipment you do get shoehorned into the dashboard with all the elegance of a pebbledashed caravan.

Engine, transmission and chassis technology has also moved on, leaving the Sandero Stepway somewhat in the dust. Its trio of engines – two petrol, one diesel – are well behind the pace of development when it comes to fuel economy, smoothness and refinement, while the chassis is competent but certainly doesn’t shine in corners or over bumps.

For its price, the Sandero Stepway offers an impressive amount of interior room. There’s space for four six-footers to sit with plenty of wiggle room, albeit not particularly comfortably thanks to the flat, unsupportive seats throughout.

There’s certainly lots of room for child seats on the rear bench, aided by dual Isofix points. The boot, meanwhile, is large and well-shaped, so you won’t have to struggle to fit in shopping bags, buggies, suitcases or any amount of kit and clobber.

The raised ride height that comes about from being a Stepway model means it’s easier for people to get into and out of the car – not that the standard Sandero was very low to begin with.

The Sandero Stepway isn’t perfect, though. You’ll find rather sharp, dangerous corners to avoid on the rear doors, while the boot lid doesn’t have an external release. It can only be opened via the key or a small lever in the driver’s footwell, and we guarantee you’ll forget this every time.

Off-road looks but no off-road ability

Despite the jacked-up suspension, chunky wheels and body cladding, the Sandero Stepway isn’t set up to go any further off-road than the field at a car boot sale. There’s no four-wheel drive system or clever grip control like you’ll find on a Peugeot 2008, and the front and rear skidplates are really for decoration rather than protection.

Of course, this is pretty much in line with the ‘urban SUV’ image that most of its buyers will be attracted to, and the plastic additions do at least protect the car’s extremities from the worst of car park dings or rogue shopping trolleys.

Does the Dacia Sandero Stepway sound like the urban warrior you’ve been waiting for? Read our full review to find out more