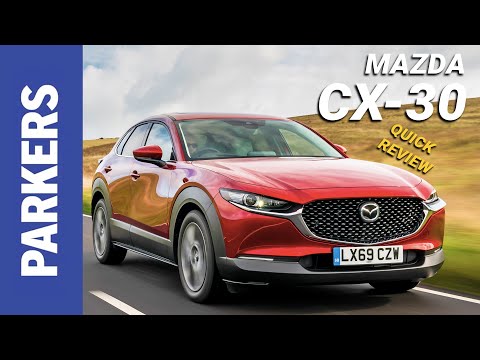 Surprises are few and far between in the modern motor industry, but the new Mazda CX-30 crossover is one such rarity. Not because it exists, but rather its name.

Size-wise, the CX-30 slots bang in the middle of the CX-3 and CX-5, so logic suggests it should have been badged CX-4, but instead it’s called CX-30. That’s mainly because a CX-4 already exists in China and the number ‘four’ sounds like ‘death’ in native Japan – something not particularly appealing in Mazda’s home market.

Its styling shares themes with the Mazda 3 Hatchback, on which this car is based. It's awash with clean surfaces and there's very little in the way of fussiness. It's elegant and sleek, with a more tapered and coupe-like rear, emphasising a sportier ethos for this crossover - and yet, it still offers a useful amount of extra room over the cramped CX-3. Little details like pulsating indicator lights add to the visual drama, along with bright and crisp LED units all-round.

Mazda's European Design Director, Jo Stenuit, told Parkers that the design is a tale of two halves. "The car is a vehicle for a young, dynamic family. The styling is split; it's sleek at the top, with plastic cladding underneath."

The unpainted plastic cladding on the lower extremities of the CX-30's bodywork makes it look sufficiently like a grown-up crossover.

Regardless, this competent compact SUV has quite a few direct rivals, in part because not many other brands offer smaller SUV coupes and also because Mazda has premium aspirations. Alternatives range from the traditional-looking SUVs, such as the Audi Q3, SEAT Ateca and Volkswagen T-Roc, to the lower and more compact Mercedes-Benz GLA and BMW X2.

Sharing most of its interior fittings with the impressive Mazda 3 hatchback means that the CX-30 is off to a great start. While it's not the roomiest of crossovers, it creates a sense of space by being uncluttered. It's plush inside, with high-quality materials, a straightforward design and a super-crisp and clear infotainment screen.

Impressively, Mazda's eschewed the use of a touchscreen for this system and instead relies on a rotary controller. We think this is a great move, as touchscreens can be tricky and at times unsafe to operate while driving. It helps that the system itself is uncomplicated to operate, but still looks up to date.

The CX-30 offers a choice between two engines, both of which are petrol and paired to a mild-hybrid system, though most drivers are unlikely to notice any electrical assistance offered here.

At the entry-level, there's the brand's standard petrol engine, badged e-Skyactiv G (Skyactiv being a brand name for Mazda's latest engines, and 'G' standing for gasoline). It's smooth and sweet-revving, but rather slow and largely suited to town use.

Then there's the e-Skyactiv X. Like the G, it's a 2.0-litre that does without a turbocharger. The X is more powerful, more economical, and cleaner than the G because of some clever engine tech that allows it to work like a diesel. In isolation it works well, but compared to smaller turbocharged engines found in the likes of the Volkswagen T-Roc and SEAT Ateca, it feels a bit breathless, if a little more refined than the 3 hatchback.

Read more about how the Mazda CX-30 drives

As with most Mazda models, there's an extensive trim level line-up to pick from, that can appear a little overwhelming on first look.

The CX-30's trim structure is similar to the Mazda 3 hatch's. Trim levels go in this order: SE-L, SE-L Lux, Sport Lux, GT Sport and GT Sport Tech. Pick from any of the middle three for the best value - SE-L Lux covers all the bases and won't really leave you wanting for more, while Sport Lux introduces bigger wheels and a bit more kerb appeal, plus luxuries like heated seats.

Tweaks in 2021 improved the e-SkyActiv X's driveability thanks to a morsel of extra power from the engine, along with more accessible torque at lower revs to benefit everyday performance.

This certainly helped liven up the driving experience, even if it still falls short of turbocharged rivals for ultimate pulling power. This also introduced the prefixed 'e-' onto the badging on both engines.

Our leasing partner, ZenAuto is offering the Mazda CX-30 for £238 per month. The usual terms and conditions apply.

Continue reading about the Mazda CX-30, including its practicality and how much it costs to run.

Volkswagen
T-Roc SUV
4 out of 5 4.0
Advertisement
How much is it to insure?