At least two or three times now, I’ve been zooming along the motorway enjoying the sun, when the rain has made an unexpected appearance. The interesting thing with the MX-5 is how dry you stay travelling at 60-70mph, because the rain seems to be swept up and over the car, rather than into the seats.

Of course that’s only true up until a light shower turns into a full-on storm. Then you have to find the nearest opportunity to pull over and put the roof up - and as anyone who owns a convertible will tell you, this is where a few seconds can make a big difference between staying moderately dry and getting very wet!

And comparing the MX-5 RC with alternative soft tops, you can see that the Mazda is pretty quick:

Obviously this isn't a list of every convertible on sale but it's a good illustration of similarly priced (and more expensive) alternatives to the MX-5 RC. The interesting thing is that only two cars are quicker than the MX-5 RC (apart from the standard MX-5) -  the new Audi A3 Convertible and the BMW Z4, both of which use a fabric roof rather than a metal folding one.

The MINI convertible, which also uses a soft roof, is three seconds slower while the fastest metal folding roof is on the Daihatsu Copen - but it takes eight seconds longer to close than the Mazda. And if you go for a Peugeot 207 CC you'll be sitting in the rain for twice as long as!

It's also surprising to see how slow the roofs are on premium cars like the Mercedes SLK and BMW 1-Series. The £30,000 SLK has a metal-folding system (which perhaps explains why it's quite slow) but the £22,500 BMW 1-Series Convertible has no excuses as it's fitted with a traditional fabric hood. 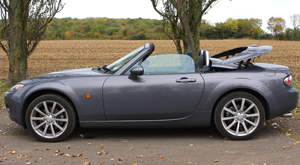 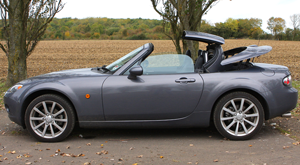 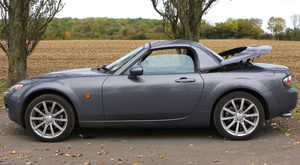 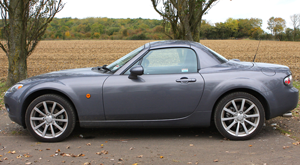