Buying used brings almost unlimited choices if you're looking to buy one of many Mercedes-Benz E-Class cars for sale. You can click the links below to search through a wide range of cars for sale across the UK. As well as that, you can use our search tools to tailor your results based on price, location, engine and trim – depending on your own personal preferences. With Parkers, you'll be able to find the right used car at the right price for you.

Want all the benefits of a new car but at a significant cost saving in cash terms? Buying a nearly-new car generally brings you the remainder of the manufacturer's warranty, full main dealer support, and a used car with low miles on it. To search for nearly new Mercedes-Benz E-Class cars for sale on Parkers, click on the links below. You will find the best cars for sale near you, and by using our search tools, you can narrow your choice, and find the perfect Mercedes-Benz E-Class at the right price.

Read review
Leasing
If owning the vehicle isn’t too important to you, you might want to consider leasing as an alternative to purchasing a car outright. You can search over 976 Mercedes-Benz E-Class lease deals available from just £345 per month at Parkers with national delivery available.
View Mercedes-Benz E-Class LEASE deals
More

What is the Mercedes-Benz E-Class?

Although the Mercedes-Benz E-Class name has only been in use since 1993, the lineage of its predecessors stretches back to the 1950s ‘Ponton’ model.

Since its inception, the E-Class has been a mainstay of the large luxury car sector, with key rivals including German opposition in the forms of the Audi A6 and BMW 5 Series, as well as alternatives including the Jaguar XF and Volvo S90 and V90 siblings.

Nestled in Mercedes’ range between the C-Class and S-Class ranges, the E-Class’s underpinnings are also found beneath the sportier CLS Coupe and the Mercedes-AMG GT 4-Door Coupe.

Which versions of the Mercedes-Benz E-Class are available? 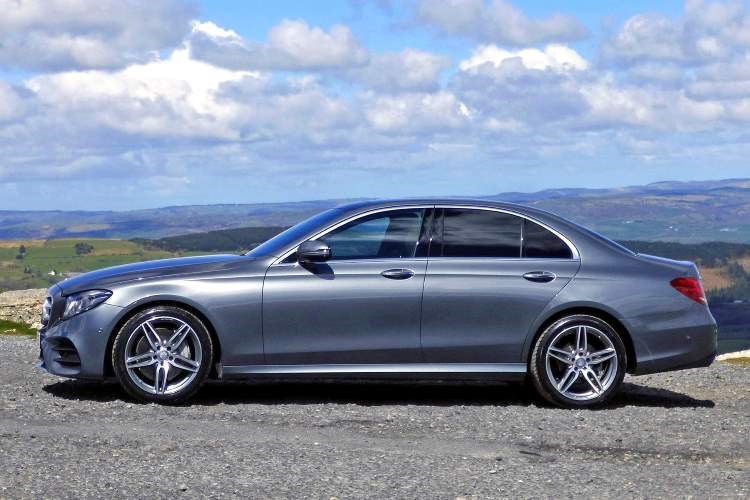 In a departure for the brand – and in direct competition with the Audi A6 Allroad and Volvo V90 Cross Country – is the S213 Estate-based Mercedes-Benz E-Class All-Terrain, complete with an elevated ride height, chunkier plastic body mouldings and standard 4Matic four-wheel drive.

It’s a rare occurrence these days that the numerical part of a Mercedes model designation represents the actual engine size, the 2.0-litre petrol E 200 being the only example in the E-Class range. 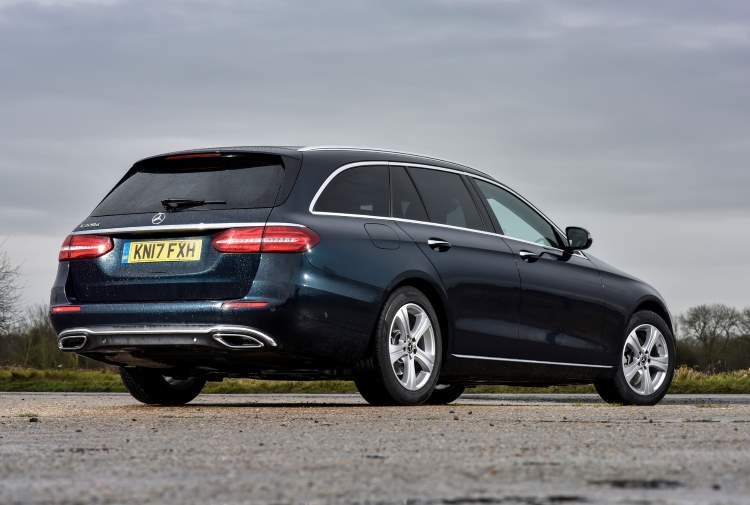 Other engine options include 2.0- and 3.0-litre diesels, a 3.0-litre petrol and plug-in hybrids mating battery power with either petrol or diesel motors. For brawnier performance, you’ll need to upgrade to a Mercedes-AMG E-Class.

All E-Classes have automatic gearboxes and, unless 4Matic is specified, power is sent to the rear wheels.

What is the Mercedes-AMG E-Class?

If blistering performance is what you’re after, then consider the appetite-whetting Mercedes-AMG E-Class range. 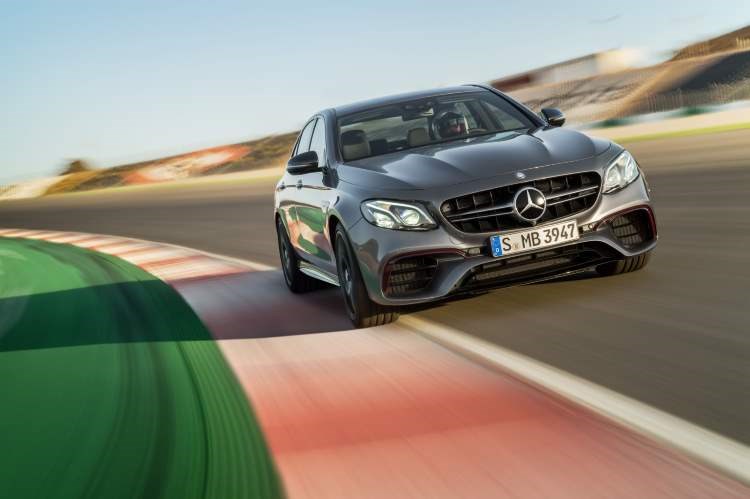 Depending upon the age and bodystyle of the E-Class, you’ve up to four Mercedes-AMG choices on offer: both the E 43 (Saloon and Estate only) and the E 53 models which replaced them have a 3.0-litre petrol engine, while the far lustier E 63 and E 63 S (no Coupe or Cabriolet versions) pack a 4.0-litre twin-turbo V8 producing up to 612hp.

In look and feel, the E-Class is more akin to a modestly scaled-down S-Class than a larger C-Class. I reeks of expense, high-quality materials, imperious construction and showcasing technology. 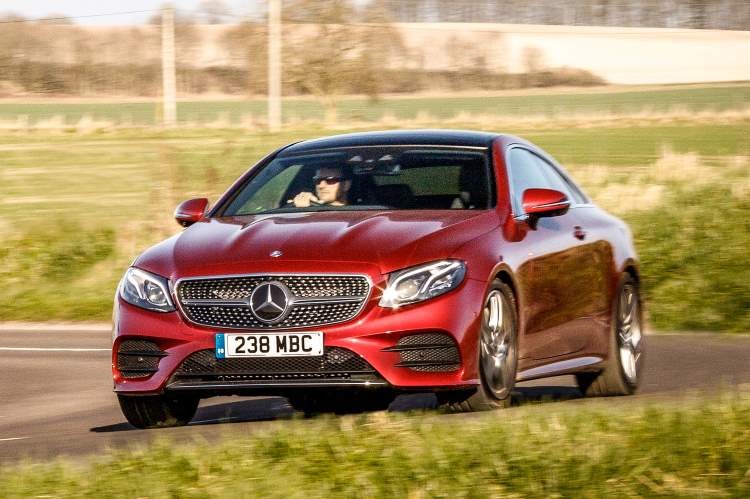 Of course, you can specify a fairly lowly appointed E-Class without the dual screen dashboard and smaller alloy wheels, but even then it still looks and feels special compared to its rivals.

Regardless of the trim level or engine type, the spacious E-Class is only sold in Britain with Mercedes’ sports grille design, with a large three-pointed star located at its centre. If you’re a fan of a more traditional grille with the logo stood proud on the bonnet then you’re in for some disappointing news – it’s not even available as an option.

Is the Mercedes-Benz E-Class good to drive?

While the BMW 5 Series and Jaguar XF trump the E-Class in terms of focused driver enjoyment, the Mercedes nevertheless is a satisfyingly engaging-yet-comfortable choice. It maintains tight lines through sweeping bends on a B-road, but will remain calming and cosseting on rough surfaces. 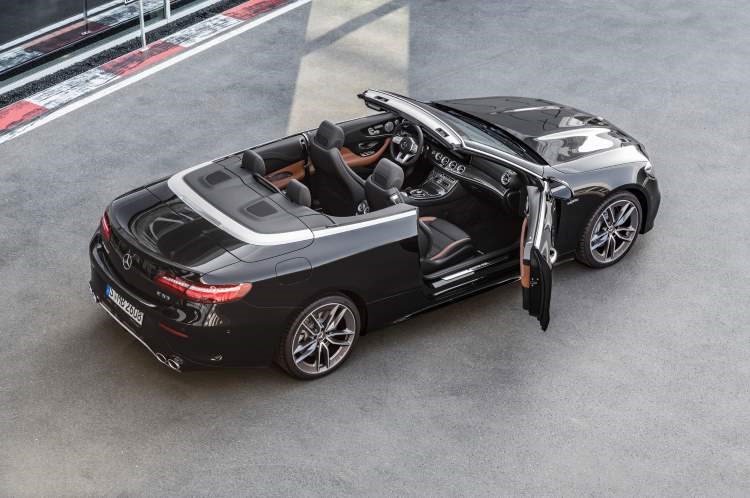 Pick one of the high-performance Mercedes-AMG versions and while the ride quality is noticeably firmer, it still remains pleasingly compliant, yet can be switched to becoming a wild sports car, with a tail-happy rear end whenever the mood takes you.

How much does the Mercedes-Benz E-Class cost?

Clearly the E-Class is a luxurious, technology-rich car, so it’s expensive to buy outright, but on finance it’s a different story. In most instances, 2.0-litre diesel-engined E-Classes are less expensive on monthly contracts than their opponents from Audi and BMW, although the Volvo S90 is usually significantly cheaper than the lot of them.

Discover what drivers of the fifth-generation Mercedes-Benz E-Class think about their cars with our comprehensive owners’ reviews. 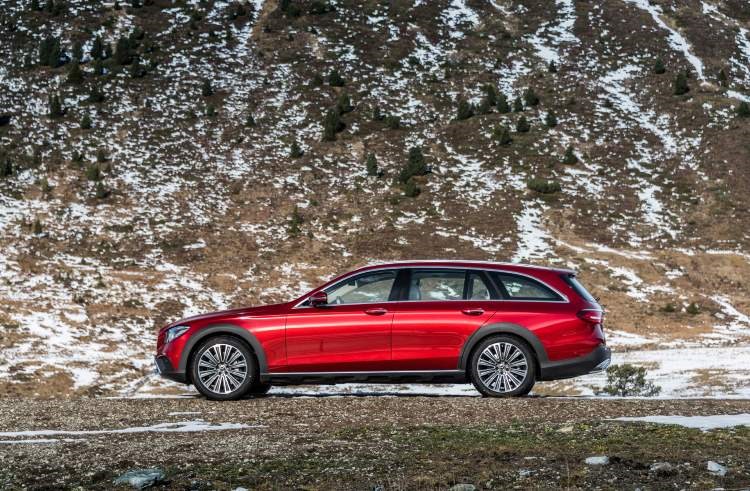