BMW announced revisions to the 3-Series at the end of 2008 with some design tweaks and more efficient engines. These changes are pretty subtle and in the 320d Touring the main differences can be seen in the new bonnet - with its central crease line - redesigned front and rear headlights along with all-black side window trims.

They may seem fairly minor alterations but park the latest version alongside a pre-facelift model and the new design looks instantly sharper and more modern.

The interior is very similar to the pre-makeover car though. However if you specify sat nav in the 3-Series then you will get the new iDrive system which we've tested thoroughly and found much easier to use.

The only Touring model in the range to come with iDrive as standard is the top-of-the-range Edition M Sport. On all others you will need to tick the option box for the business navigation system which will set you back about £1,500.

So it's no surprise that many 3-Series owners opt for portable sat nav units, which are much cheaper at anything from around £100 upwards. There are two handy power points in the Touring so it is easy to plug in a portable sat nav, but it isn't a pretty sight with leads trailing across the dashboard. 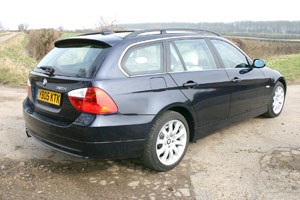